As Far Away as Possible

As you probably know, there was some sort of political event on the other side of the Pacific today. Definitely a day to avoid all forms of electronic media, so I headed for the most distant point I could think of. 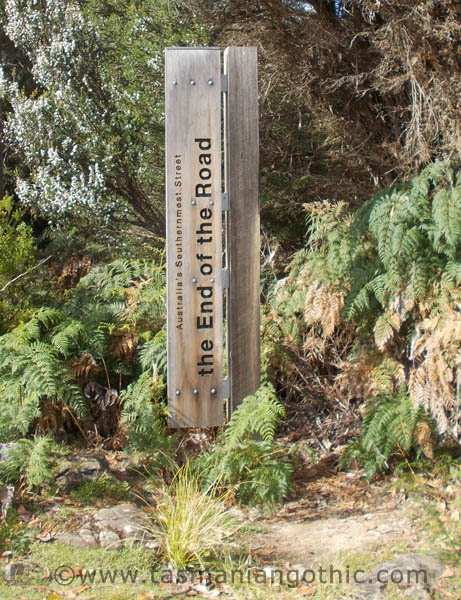 There is no television nor radio. Absolutely no internet access or wifi; not even mobile phone coverage. A perfect escape.

We had good weather – warm, but not too hot, and an easy walk through beautiful and varied terrain in congenial company. What more could you want?

Here are some photographs I took down there last year. Forget about politics and enjoy. 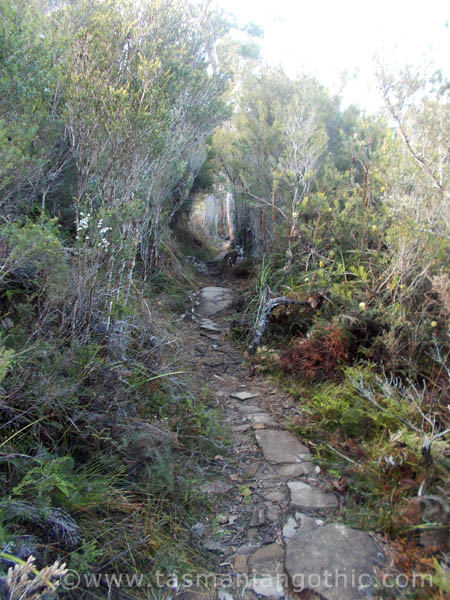 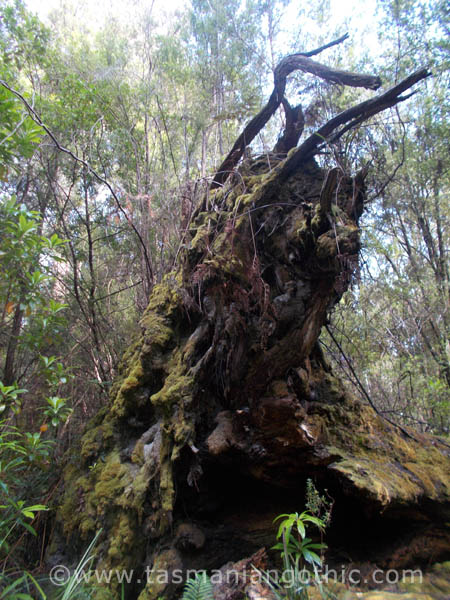 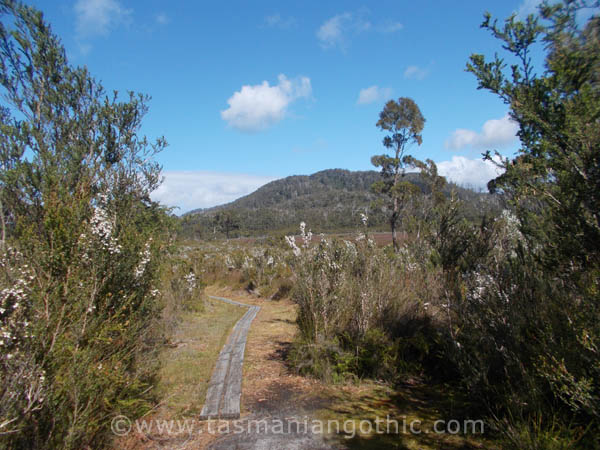 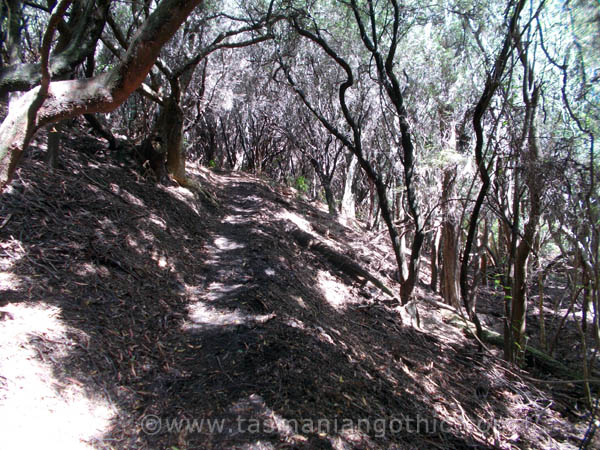 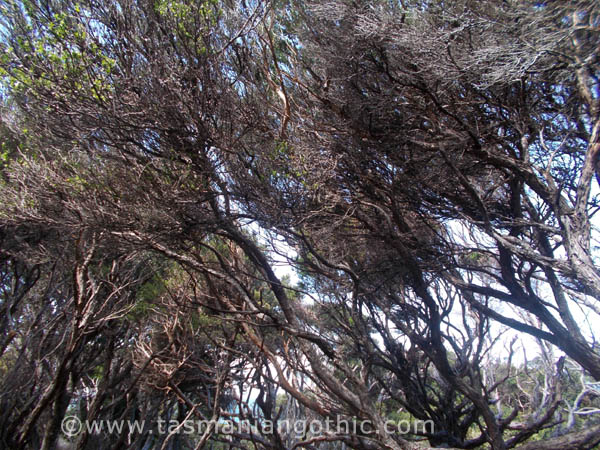 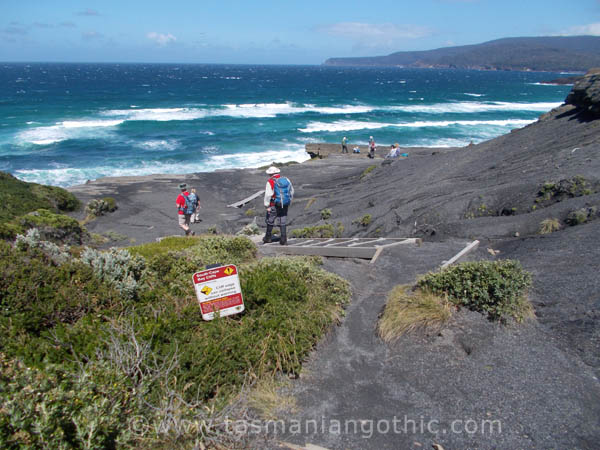 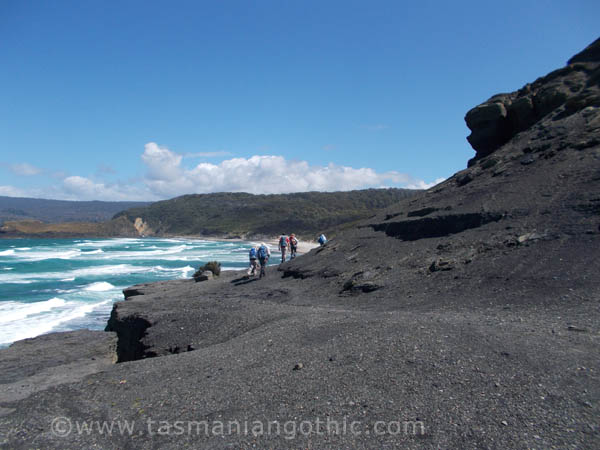 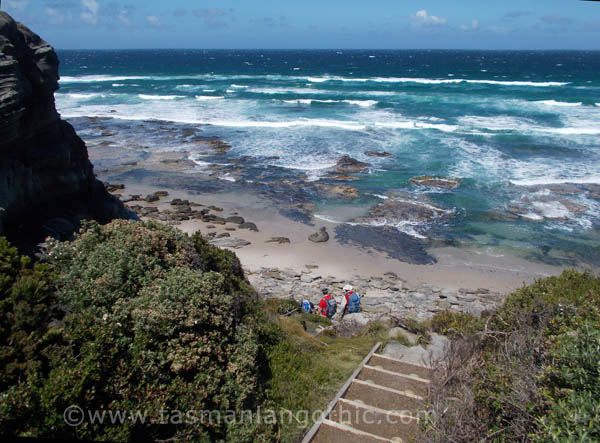 Posted by Elizabeth Barsham at 12:08 AM No comments:

IN WHICH WE FAIL TO CLIMB WETPANTS PEAK 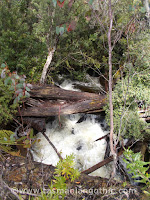 I've returned from the Big North Island, where walks in the ACT consisted of climbing steep hills covered with dry eucalypt forest. Today's walk couldn't have been more different: so nice to be back in the familiar surroundings of a Tasmanian rainforest. Of course, a problem with rainforests is – rain. Optimistically ignoring an unfavourable weather forecast we drove all the way in to the southern forests to the start of the Nevada Peak walk.

Actually, our intended destination was not Nevada Peak but the slightly closer, not so lofty Wetpants Peak, probably named by Tom Stevens of the Forestry Department who surveyed the area in the mid-twentieth century.
You can look up the reference here: https://www.placenames.tas.gov.au/ - just type in the place name. And we didn't drive quite to the carpark, either: 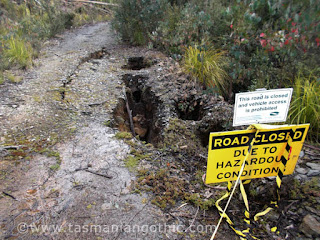 We had to walk the last half kilometre.

To our surprise – and theirs – we encountered three snakes curled up together on the side of the road; surely it was not warm or sunny enough for snakes to be out? Of course, by the time I disentangled my camera they were retreating into holes between the rocks, but you can see bits of two of them. 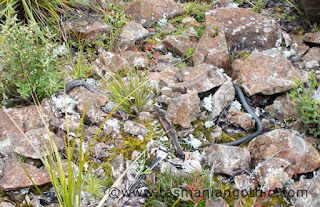 Leaving the carpark, where our cars weren't. Sorry about the rainspot on the lens. 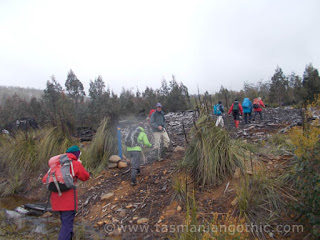 After a short walk on a waterlogged corduroy road we reached the beginning of the track proper. 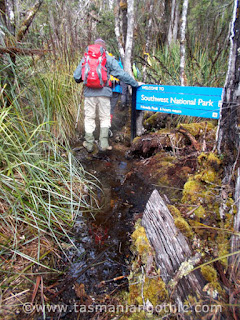 Depending, of course, on your definition of "track". 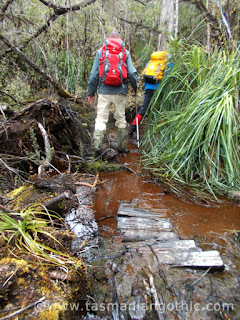 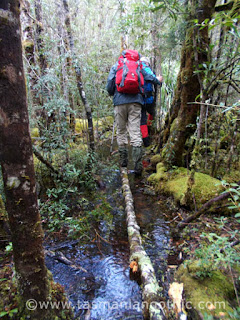 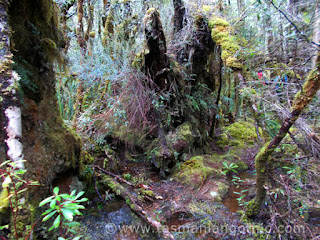 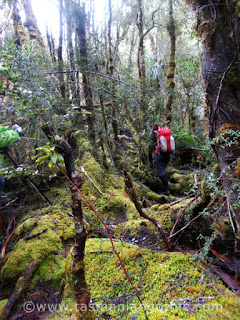 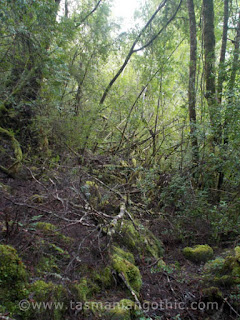 We began a climb where negotiating the stretches of mud, large pools of water and flowing streams that passed as a track was varied by scrambling over, crawling under and balancing on fallen logs in various sizes and stages of decay. With both hands occupied grabbing vegetation for support, photography was out of the question. Besides, as we gained altitude the weather became more and more inclement, with rain and an icy wind. Through the rain and low clouds we glimpsed snow on Nevada Peak.

By the time we reached Woolleys Tarn we were tired, wet and cold and had had quite enough, thank you. There were traces of snow there, too. 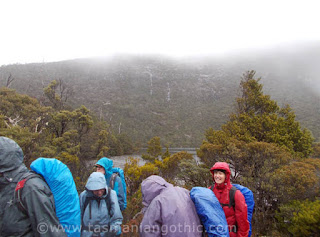 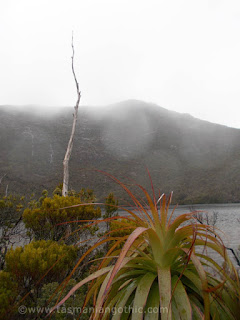 This is Wetpants Peak. You can see a couple of waterfalls to the left of the picture.

Nobody evinced the slightest interest in climbing it. Even my camera was feeling the damp and refused to work any more.

So we found a relatively sheltered spot in the forest among some impressive pandani and ate a soggy, hurried lunch before retracing our steps.

Posted by Elizabeth Barsham at 12:20 AM No comments: