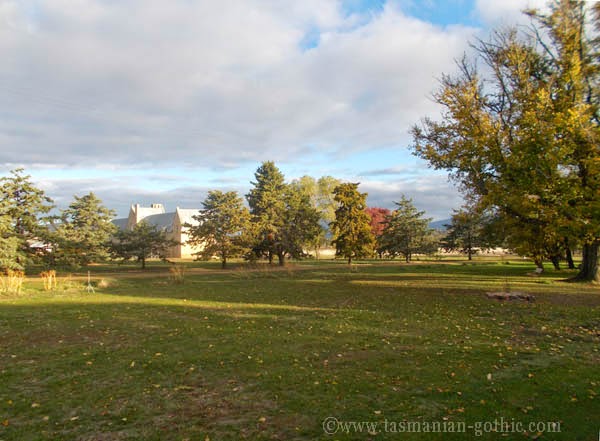 As pony-besotted teenagers being driven up the Midlands Highway we were too busy looking out for horses along the way to notice many buildings. An exception was an imposing stone edifice marooned in the middle of bare, flat paddocks just north of Pontville. We knew it had been erected as stables, and that the accompanying farmhouse was far less grand – quite insignificant, in fact. Here, we felt, were people who had their priorities right.

That was a long time ago. The last of our ponies has long gone to that verdant pasture in the sky and we are getting old. But the magnificent stables at Shene are still standing and the view across the paddocks towards Mount Wellington is still recognisable as the one Mary Morton Allport and John Glover painted in the early nineteenth century.

Last weekend we went for a bracing walk on Butler's Tier before settling our feet under the table in one end of the lovingly refurbished stable for afternoon tea. 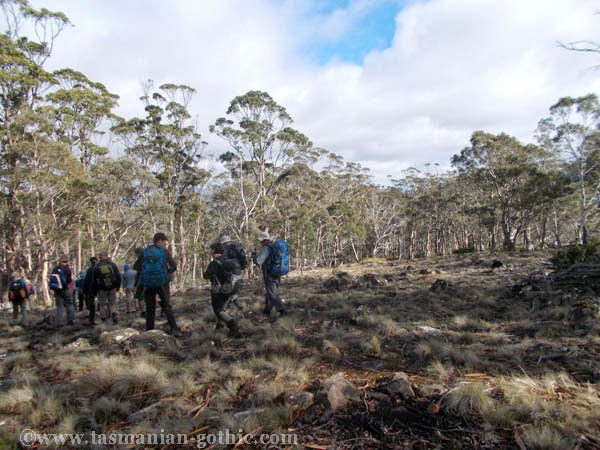 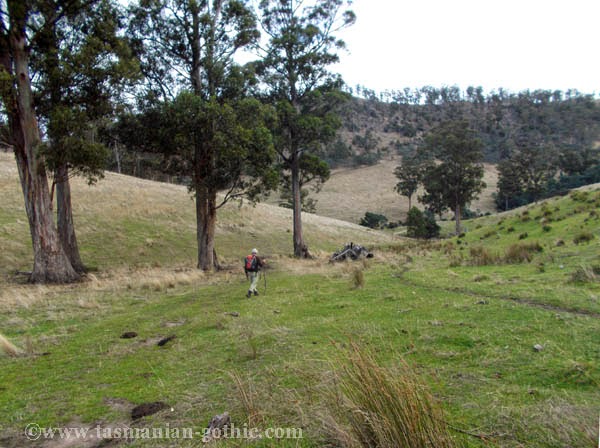 But why did the owners of Shene apparently neglect their own comfort so their horses could live in luxury?

Gamaliel Butler Esq. is the man most closely associated with the history of Shene, although others had owned the property before him. Born in 1783 he was a lawyer, practising for eighteen years in Watling St., London. In July 1824 he and his wife arrived in Van Diemen's Land to find out what had happened to his £10,000  investment in a cargo of sugar. Although they had intended returning to England, Mr Butler was admitted as a practitioner in the Supreme Court; the colony was barely twenty years old, and no doubt highly educated men were in short supply. By the time the sugar business was satisfactorily resolved, the Butlers had settled in and could see great opportunities for a smart man with a bit of money and some legal training. He was in on the ground floor of a new venture.

The Butler children had been left behind in England to be educated and raised as proper English gentlemen and women. The youngest, Francis, who had been only a year old when his parents set sail, studied architecture, and on graduating joined his parents at Pontville.

Right up until the middle of the twentieth century Pontville freestone was famous as a building material, and there was plenty on the Butler property. Labour was plentiful and cheap; there were convicts assigned to landowners, and there was a pool of ex-convicts who had been set free to survive or starve as best they could when their sentences expired. And here comes an enthusiastic, newly-graduated architect keen to make a name for himself and set up practice in a new country.

So young Francis set to work to build his Cotswold-style masterpiece that would prove he had skills worthy of hire. No doubt Mr Butler Snr. was not at all averse to possessing the smartest stables in the colony and supported his son's ambitions. 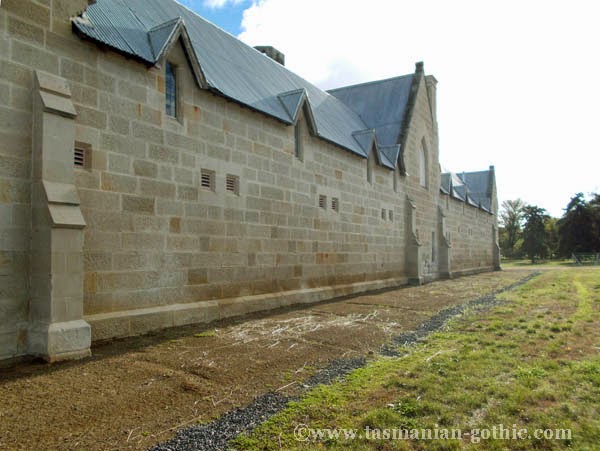 Even with free labour and materials it takes time to build a large stone building, and the work was still incomplete when circumstances beyond his control thwarted young Frank's efforts. In 1852 Gamaliel Butler died, and the following year the Victorian gold rush began. There was a boom in export of timber, fruit and grain to Victoria, and those who could take advantage of the new market did very well.

However, farm labourers vanished from the land, off to seek their fortune in the gold fields and many large landowners had to give up outlying properties over the next few years because there simply wasn't the manpower to work them. Even the source of cheap labour – convicts – dried up with the last 1,507 arriving in 1853. By 1855 the Tasmanian economy was in decline and completing a ridiculously elaborate barn for somebody's horses would not have had a high priority. In 1874 the Butler family sold the property.

from: the Mercury, 26 October 1874; p. 4
Roberts & Co Are favoured with instructions from the Trustees under the will of the late Gamaliel Butler, Esq , to sell by public auction, at the mart, on
FRIDAY, 18th December next Commencing at half-past eleven sharp,
The Estate of SHENE, Bagdad, at present in occupation of J. Butler, Esq., close to the main road to Launceston, within three miles of the probable station of the Main Line Railway at Brighton, and l8 miles from Hobart Town, bounded by properties of Hopkins, Hayes,Lord, and others.
The land contains 5,600 acres, of which 800 acres, including a part of the rich Bagdad Valley, have been cultivated; there are large orchards, and the whole is abundantly watered by the Bagdad Rivulet and other streams, the former being stocked with trout. There are also two large ponds well stocked with English fish.
The buildings are mostly substantially constructed of cut stone, and comprise large dwelling-house, stores, dairy, gardener's house, men's cottages, granary, wool-shed, barn, large range of stabling, coach house, &c, &c.
Maurice Weston, Esq. bought it for £13,328.10 shillings.

The magnificent, though still unfinished, stables were in a sad state and the house not much better when the present owners, Anne and David Kernke, joined the new wave of free settlers arriving in Tasmania. There are no more land grants and assigned servants, but there are plenty of derelict colonial buildings waiting for the right people to lavish vast amounts of time and money on their restoration.

Since 2006 the Kernkes have been toiling like convicts themselves putting Shene back together, and hope that before long Francis Butler's showpiece will be completed – a century after his death in 1916. 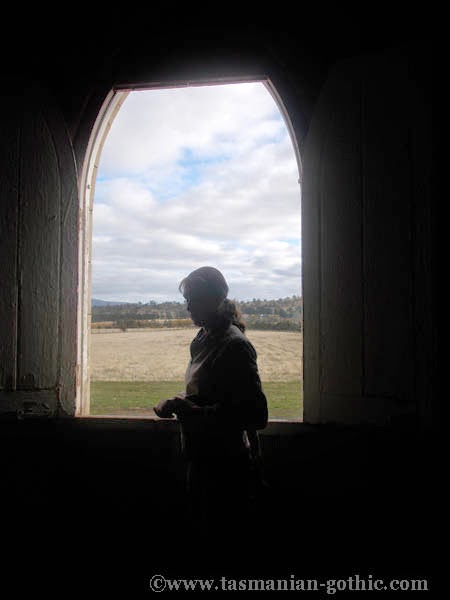 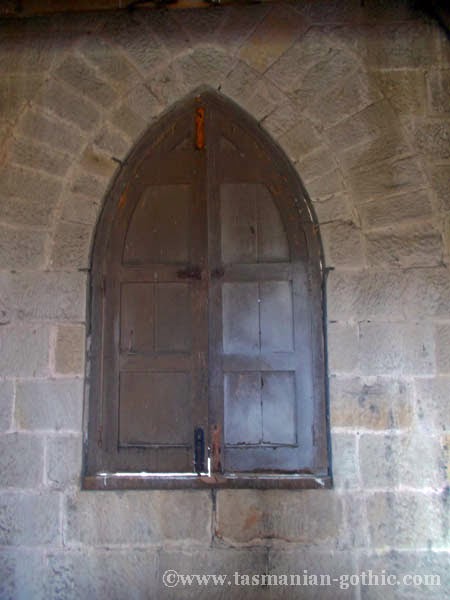 Francis Butler did a few architectural jobs around Hobart – the Battery Point Community Hall on the corner of Hampden Rd and Francis St in Battery Point; the bank building at 103 Macquarie St and the Gothic Revival church on the corner of Brisbane and Elizabeth Streets, but this hardly earned him a living. He became Commissioner of Public Works in 1871, a position he held for two years, and he retired as Commissioner of Taxes.


There aren't any horses at Shene these days, although I'm told there are plans . . .

In the meantime, drop out there yourself. Enjoy afternoon tea in the stable, inspect the homestead and see what a terrific job Anne and David are doing. Oh yes – this is a link to their website: http://shene.com.au/

Posted by Elizabeth Barsham at 2:46 AM No comments:

TO HELL AND BACK

Hellfire Bluff is at the southern end of Cape Bernier, the northern end of which is Whaler's Lookout. It's a very easy walk along the coast, but is mostly on private property so you need to get permission first. 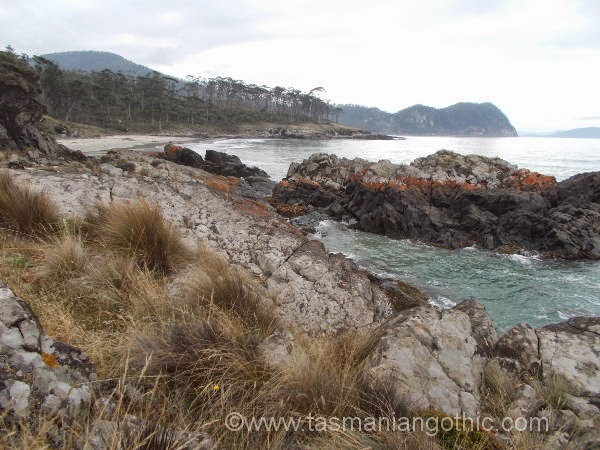 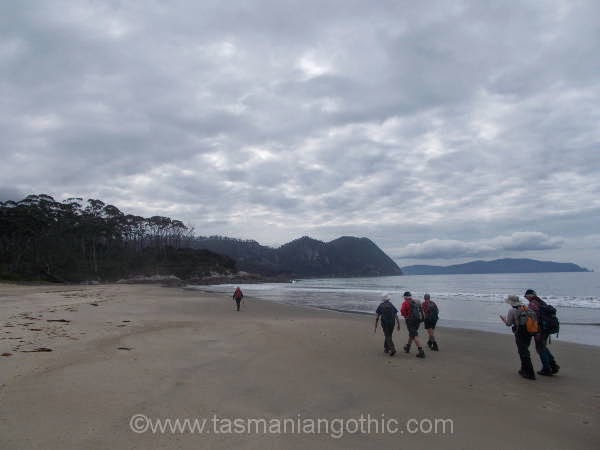 The tide was well out and the sand just damp enough to squeak nicely underfoot. 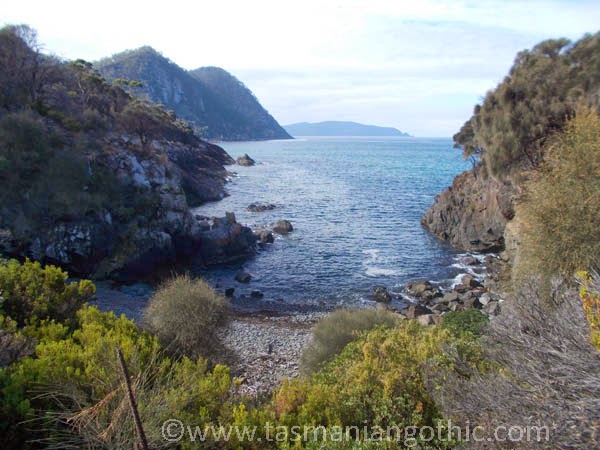 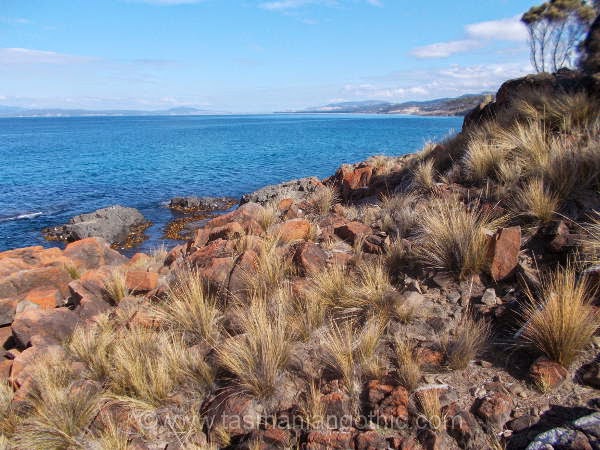 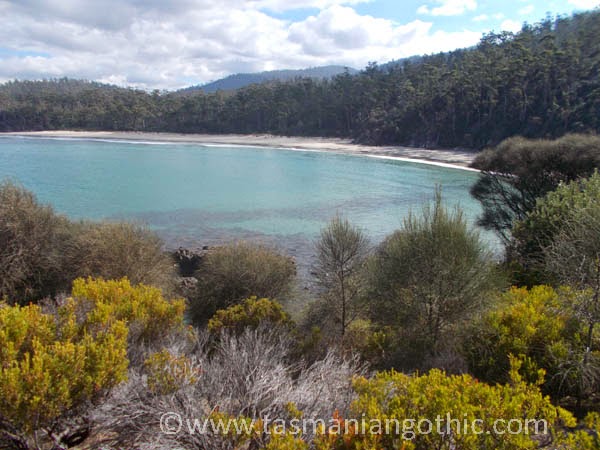 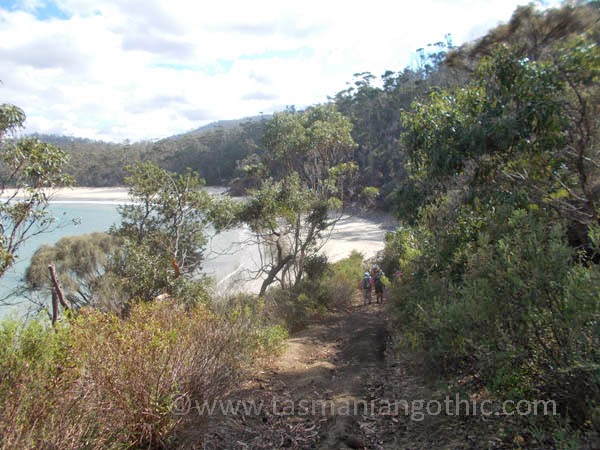 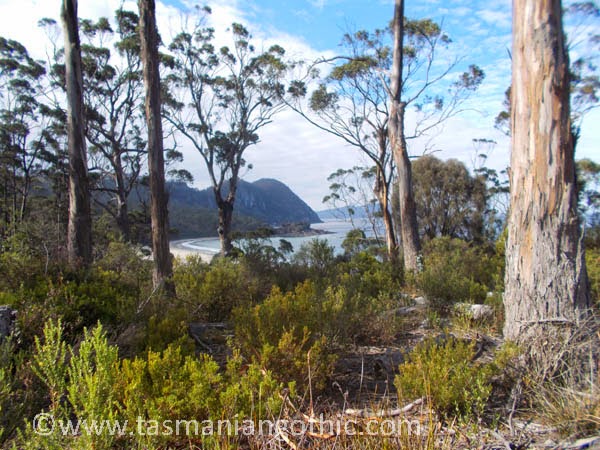 Back along the beach we discovered thousands of tiny jellyfish washing up on the tide. At least, I think they were jellyfish - any marine biologists out there know better? 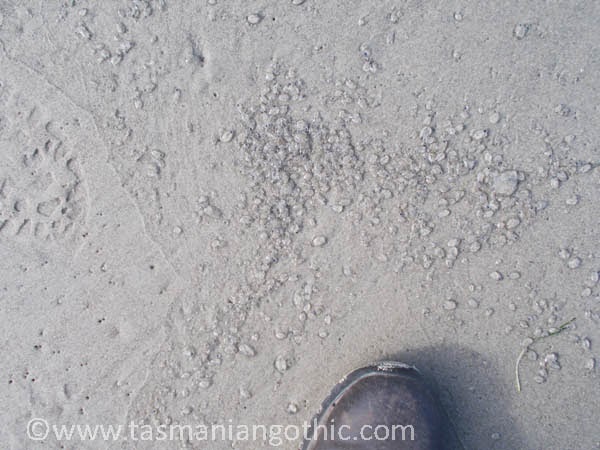 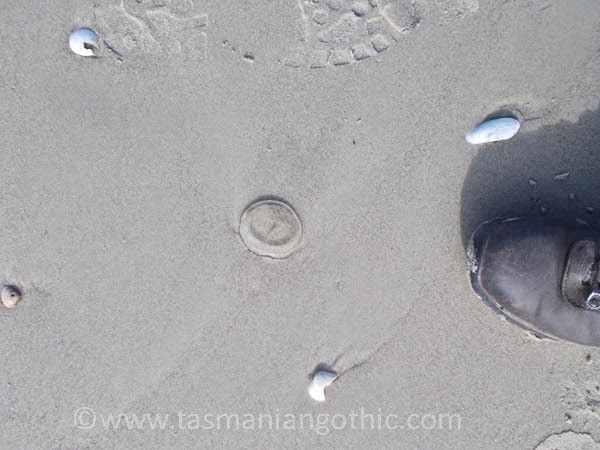 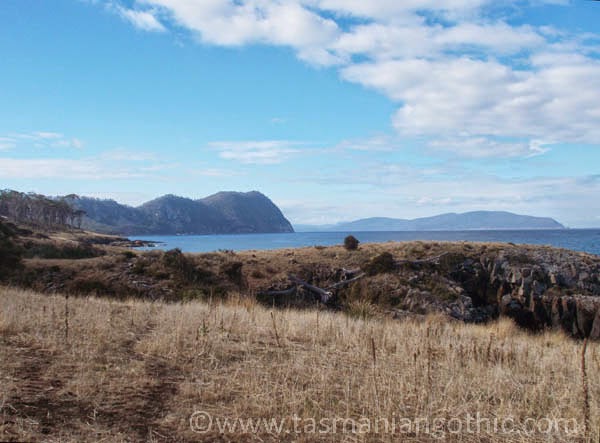 Sheep had been down to the beach in the morning, perhaps grazing on kelp and the sand was covered with their hoofprints.

I believe Hellfire Bluff was named after a ship, but cannot find any confirmation - does anybody know?

Posted by Elizabeth Barsham at 12:06 AM No comments: