Come to the National Day of Climate Action

Sunday 5 June: Join Australians saying "yes" to a cleaner Australia:
11 am at Franklin Square, Hobart.
I can't believe I'm going to a demonstration IN SUPPORT of Government policy! We do live in a strange world. 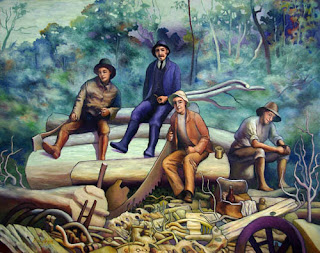 Another thing I'm doing is entering three paintings in this year's Weld Echo Exhibition, the annual fundraiser for the Huon Valley Environment Centre. You can see a photograph I took on the Weld River a month ago; it's planned to put a bridge across here for logging access.

A collaborative exhibition of works inspired by the wild Weld Valley of Southern Tasmania.
An important fundraiser for the campaign to protect the Weld Valley forests from industrial logging.

One of my paintings is above; here are the other two: 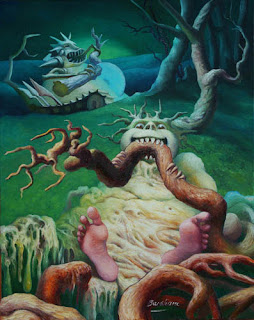 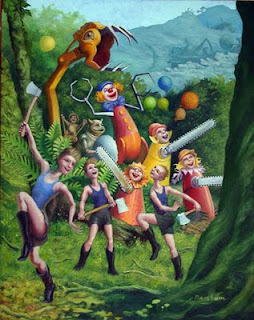 Tasmanian Gothic Stuff no. 3: On Not Believing Everything They Say 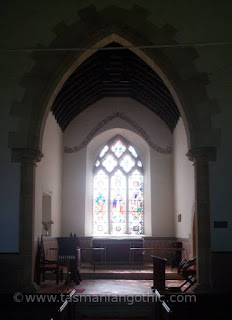 Gothic architecture was a German style invented in Northern Europe. Its pointed arches and the intertwined ribs of its vaults derive from the wild northern forests, where ignorant barbarians simply dragged branches together to form shelters instead of building themselves real houses.

It is a logical successor to the solid Romanesque buildings, recalling the caves and holes where their primitive ancestors huddled while the Romans were out spreading Civilisation.

The great Italian Renaissance art historian, Vasari, added that the 'Gothic' style, the embodiment of disorder and chaos, was an invention of the historical Goths who sacked Rome in the fifth century.

The entire theory above is nonsense invented in Italy, where they rejected the modern, foreign fashions and reclaimed imperial Rome as their true heritage.

In the sixteenth century Reformation Protestants denounced the elaborate mediaeval systems of religious orders, condemning painted and sculpted representations as idolatrous and the magnificently furnished churches and other ecclesiastical buildings with their elaborate spires and opulent stained glass as an ingenious but vainglorious waste of resources.

In England Henry VIII declared himself head of the Church, dissolved the monastic orders and sold off their properties. Northern Europe rejected Italian religiosity and stopped building big, spiky cathedrals, but the myth of the “natural” origin of Gothic architecture lingered on. 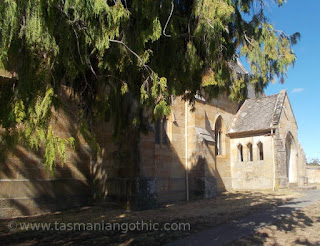 AND A TASMANIAN POSTSCRIPT

St John the Baptist Church in Buckland, Tasmania, has been the subject of speculation and myth-making for more than a century. 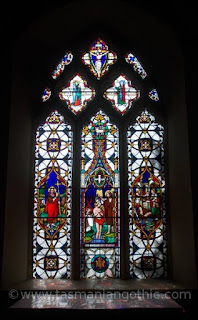 It's all because of the east window, a genuine Mediaeval window from the Battle Abbey at Hastings, which was rescued by a member of the Cecil family from destruction by Oliver Cromwell. After many years buried for safekeeping it was eventually given to Rev F.H. Cox by Lord Robert Cecil, Marquis of Salisbury, then Secretary of State for the Colonies, who was a family friend. Dean Cox brought it to Tasmania and had it installed in the little country church. There is a variant of the story that says it was presented to the church by the Earl of Salisbury, who walked through the district.

This is a good story, and a nice example of “general” knowledge used to supply extra details. Now we'll pull it to pieces.

Flashback to 1066, when William the Conqueror led the last army to invade England. Before the Battle of Hastings he vowed that if he won, he would build an abbey to the glory of God. It is also said that he was ordered by Pope Alexander II to perform an act of penance for killing so many people, so here's another little myth. One or both may be true (probably the latter), but in any case the Battle Abbey was built on the spot where Harold had fallen.

The church at Battle Abbey was only one of hundreds of buildings to vanish from the face of the earth under Thomas Cromwell, Henry VIII's chief minister from 1532 to 1540. By the time Oliver Cromwell (Thomas' great-great-great nephew) came on the scene a century later most of the remaining buildings on the site had been demolished and the abbot's house was a private country mansion.

There is no way to prove or disprove Cox's friendship with the Cecil family, or their gift of the window, but it is well within the bounds of possibility. It was not such a strange thing to give a man who was going out to the colonies to build a church. However, it is highly unlikely the gift was given by Lord Robert Cecil himself.

When Cox departed for the colonies Cecil was barely sixteen years old. By the time the young Earl visited Tasmania in 1852 (aged 22) Cox was no longer at Buckland. Cecil kept a journal of his travels, but as Secretary of State for India (1874-1878), Foreign Secretary (1878-1880) and Prime Minister of England (1885-92, 1895-1902) he never displayed any particular interest in Australia.

In 1846 Reverend Frederick Holdship Cox emigrated from Sussex to Tasmania to become the Rector of St John the Baptist Church, Buckland. He brought with him, among other useful things, a stained glass window he had ordered from O'Connor, Berners St, London, and which he said was a gift from a friend. A little stone church was built for him in the district of Prosser, and the window was installed there.

Authorities who have examined the window date the glass in the central figure groups to the fourteenth century. The surrounding quarries are nineteenth century; apparently Cox did not order a completely new window, but had some antique pieces incorporated into a modern setting. They may well have come from the church at Battle Abbey, but there is no way to prove or disprove the connection. 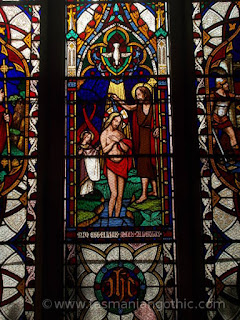 But they are definitely old, definitely interesting, and any time you are passing through Buckland you can stop to admire some authentic Gothic stained glass.

Posted by Elizabeth Barsham at 10:54 PM No comments: