Last weekend I watched history being made at Wynyard. For the first time ever open combat swordsmanship and a jousting competition were organised right here in Tasmania. Chain mail, longbows, mediaeval ladies and jousting knights on horseback, they were all there to delight onlookers. Sort of history making history, in a way.

These are all definitely part of European history, but what are they doing on the other side of the world - in Wynyard, of all places? 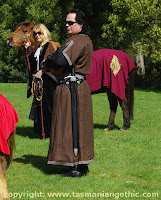 There has been a growing interest in things Mediaeval, most recently encouraged by computer games and the entertainment industry busily mining the past for inspiration to feed our romantic fantasies. 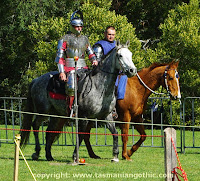 For a few people simply watching wouldn't do. They learned enough metal-working skill to put together a crude suit of armour, scoured antique markets for ancient weapons, hunted up manuals of swordsmanship in the depths of libraries, and gathered after work to practise. More people saw what fun it was and joined in. Skills improved. Modern Mediaevalism was established.
Some groups are pretty much interested in combat and not much else, but many others embrace an entire philosophy drawn from the more attractive ideals of earlier societies. Complex rules of chivalric behaviour are drawn up. Social and cultural skills are highly regarded, with needlework, music, recitation, cookery, calligraphy and dancing actively encouraged besides the more obvious warlike crafts required to construct weapons and armour and beat the living daylights out of an opponent. 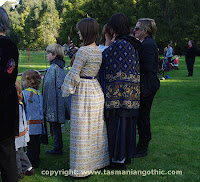 Since the mid-twentieth century such groups have proliferated, and no matter which historical period you fancy it is probably possible to find enough like-minded fanatics to form a lively organisation. You can even buy off-the-shelf armour, weapons and garb if you lack the time and skill to make your own.
There are several such groups in Tasmania. One of the more recent to arrive  is The Sovereign Military Order of the Knights Templar.


The Sovereign Military Order of the Knights Templar 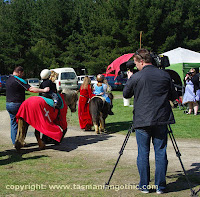 Based in Burnie, the Dragon Order is a family-focused organisation devoted to supporting local charities and helping underprivileged and disenfranchised young people in the local community. To this end, the Sovereign Military Order of the Knights Templar runs structured courses for children on various aspects of mediaeval European life and history such as swordsmanship, costume and clothing, chivalry, the Crusades, knights and castles, and they operate a Historical Western Martial Arts Swordsmanship School where anybody who is interested can come along for instruction in organised mayhem.
Last weekend they organised a Mediaeval Fair at the Lions Club Park in Wynyard, and here are some of the things I saw. 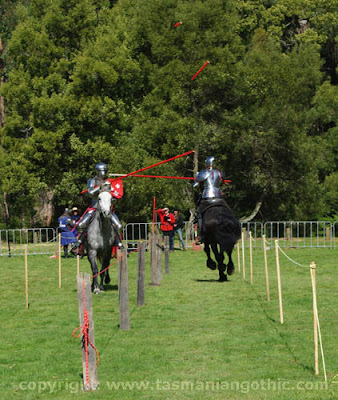 Posted by Elizabeth Barsham at 5:45 PM No comments: