The Lichen Hill walk is considered one of the best short walks on the Tasman Peninsula. Of course, this depends how you define "short" - at about twenty kilometres it's certainly shorter than the stroll out to Cape Pillar, for example. And it certainly is a beautiful walk if you don't mind having to push through a bit of prickly scrub.


We parked at the Devil's Kitchen (for those unfamiliar with the area, it's on the coast slightly left of the centre of the above photo) and walked along the cliff-tops past Waterfall Bay to Tatnell's Hill, just visible on the right. The pointy bit is Clemes Peak, not on today's itinerary.


Tatnell's Hill is the second-highest peak on the Tasman Peninsula.  And this is what the summit looks like. This is the summit of Lichen Hill, the highest peak on the peninsula; it's five metres higher than Tatnell's hill. Nothing to see but some dry bushland so we moved along to a more picturesque lunch spot. 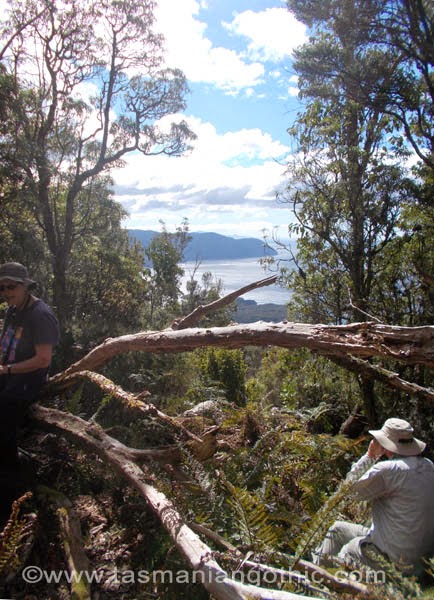 Lichen Hill certainly deserves its name. The variety of shapes and colours was wonderful – but like so many wonderful natural things, it was hard to really capture them in a photograph. 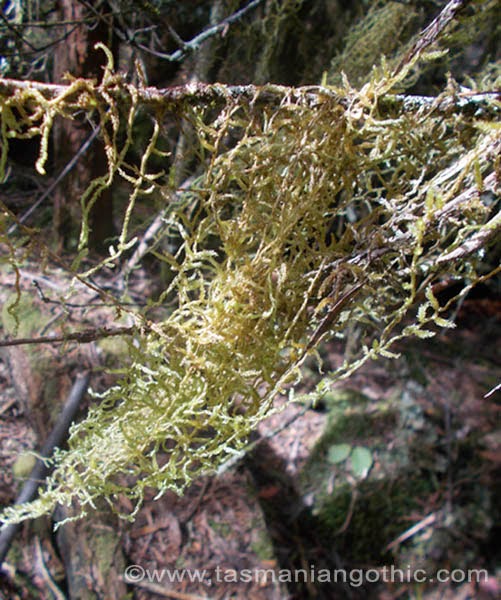 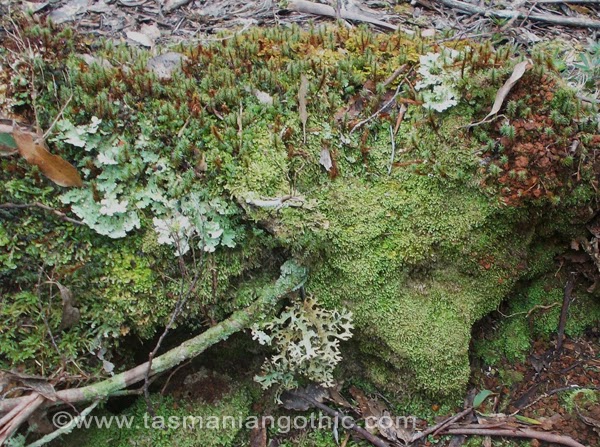 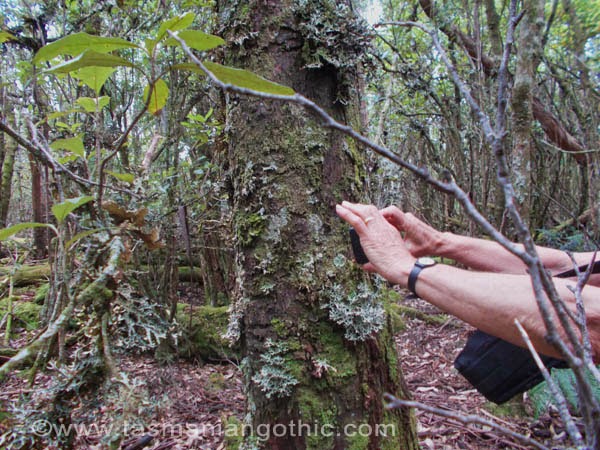 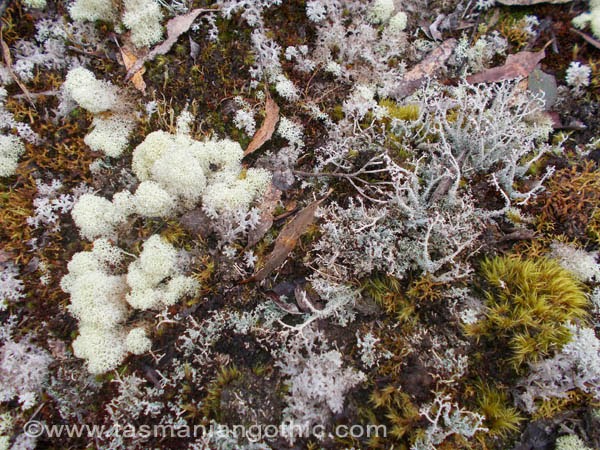 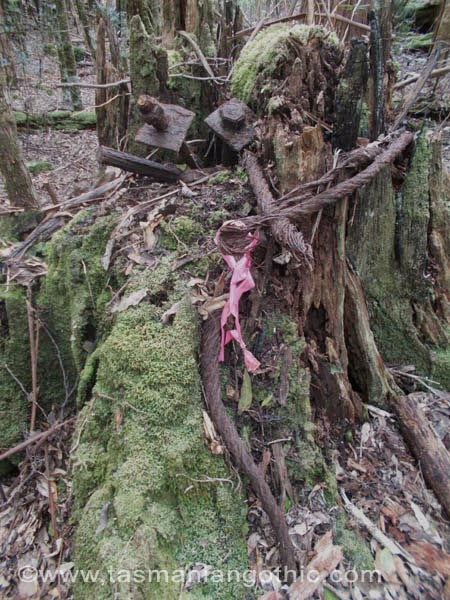 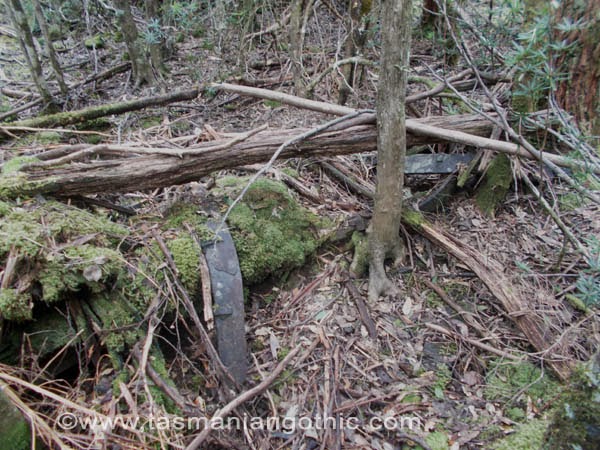 Much of this area was logged in the early days, and here and there are massive, rotting tree-stumps to remind us of the size of some of the trees taken out. Somewhere along the ridge-line we came across relics of the timber-cutters. Rusting machinery under all this moss suggests there may have been a bush sawmill here once. 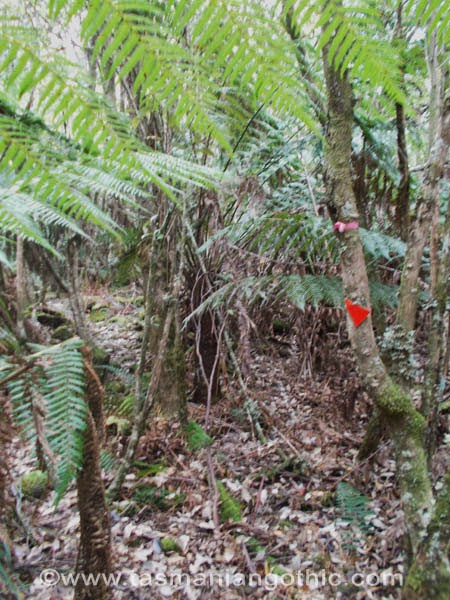 The pink ribbon on the stump is a navigational aid for bushwalkers. The track is well marked, which is a good thing as it's very difficult to see in some places; often it was a blurry as this photograph (left).

We came down Lichen Hill onto the road leading up to a hang-gliders' platform, which provided the splendid view back over the Blowhole and Pirates' Bay at the top of this page. Then we picked our way further downhill to Cash's Lookout, named after Martin Cash, the "gentleman bushranger".

Cash was an Irishman who was transported to NSW in 1927 for housebreaking. He served out his sentence and obtained a ticket-of-leave, but just couldn't stay out of trouble and fled to Tasmania after a spot of cattle-duffing. He was soon convicted of larceny; escaped from prison three times in three years, remaining at large for almost two years before he was caught again and sent to Port Arthur. Escape from the Peninsula was supposed to be impossible, but Cash, with his companions Jones and Kavanagh, succeeded.

After a career as bushrangers, during which the three became notorious for robbing inns and wealthy landowners,  they were recaptured. This time Cash barely escaped hanging and was sent off to Norfolk Island where he was a model prisoner. Eventually he was released again, spent a few years in New Zealand then came back to Hobart and settled down at Glenorchy, overseeing the Government gardens on the Domain and running a small farm of his own.

Never resorting to undue violence and generally treating their victims respectfully while relieving them of their money, Cash and his companions became popular villains. In later life Cash was persuaded by a journalist, James Lester Burke, into narrating his story, which Burke edited. It was published in 1870 and has been reprinted many times. Pick up a copy in a second-hand book shop and enjoy a rollicking good read.


Cash's Lookout is a rocky outcrop on the hill overlooking Eaglehawk Neck that gave the boys a good vantage point from which to watch the guards at the Neck and plan a strategy.

In the end they swam across Norfolk Bay but lost all their clothes and possessions in the process and were forced to cross the Forestier Peninsula without the protection of boots or trousers. 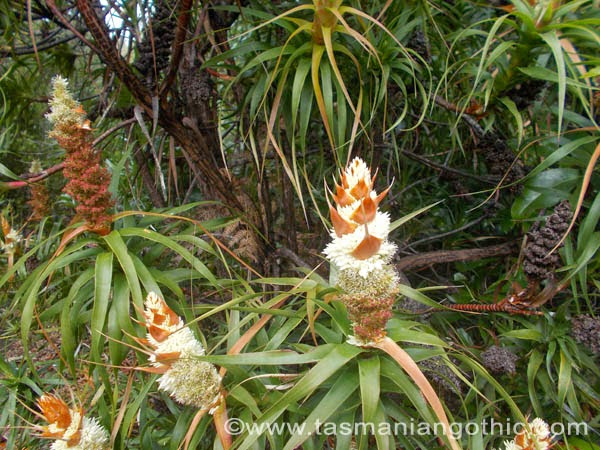 This is Richea Dracophylla. Don't be fooled by the pretty flowers. The pointy caps drop off as the flower opens, but those leaves are big, rigid and sharp. This is only one example of the dense anti-pedestrian flora Cash, Kavanagh and Jones would have encountered. Not to mention leeches, jackjumpers and other biting insects.

They built 'em tough in those days.

Posted by Elizabeth Barsham at 4:10 AM No comments: