Skeletonizers, Stingers, Sandstone for Victoria and a Shipwreck 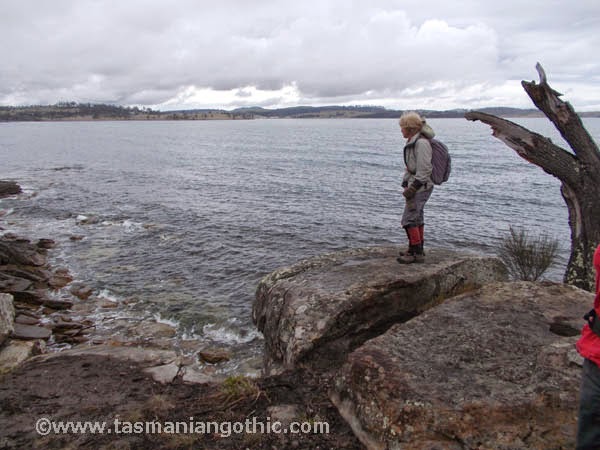 Even on overcast days the east coast of Tasmania is interesting and beautiful, and I can recommend a walk along the coastline from Orford to Stapleton Beach. 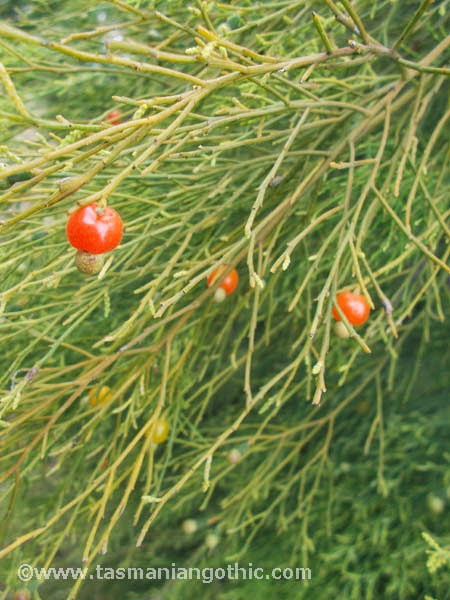 Wild cherries were abundant and those of us brought up in the bush strolled along nibbling the tiny fruit. I believe they're a good source of vitamin C, but they're so small you would have to eat an awful lot to do you any good. These aren't ripe enough to eat so were left behind. You can find out more about these peculiar parasitic trees on the Australian Plants Society Tasmania website: http://www.apstas.com/sgaptas-curios2.htm

We weren't the only ones browsing on the vegetation. 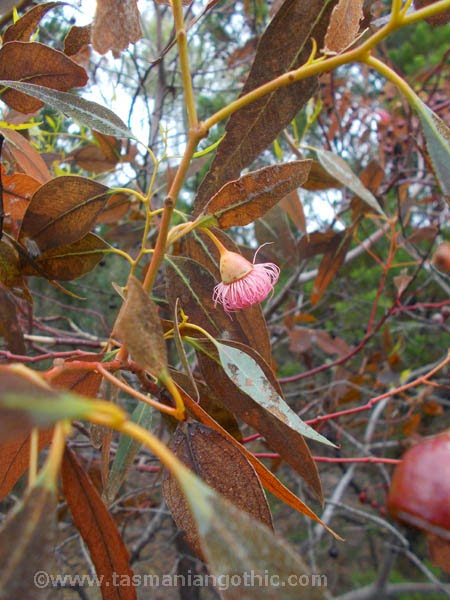 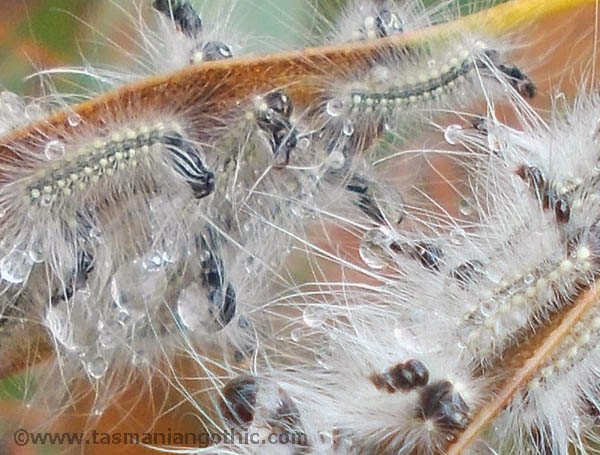 This is the Gumleaf Skeletonizer (Uraba Lugens) caterpillar. It not only eats away the fleshy part of gumleaves, leaving only the skeleton (hence its rather splendidly gothic name) but its hair is poisonous and can cause a nasty, itching rash. Still, it looks pretty with raindrops on it. You can find out more about it here:
http://www.forestrytas.com.au/uploads/File/pdf/forest_health_leaflets/insect_pests/pestsinfosheet4gumleafskeletoniser.pdf

There were some lovely, delicately speckled hyacinth orchids flowering along the path. You'll be pleased to hear nobody seemed to be eating them. 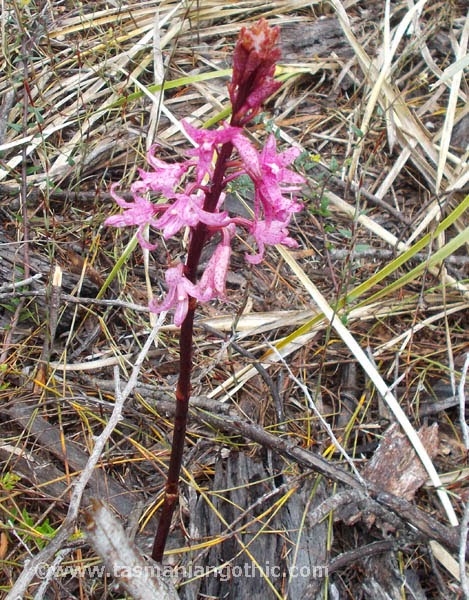 Seen on a Beach


Back down to the beach, where we found plenty of bluebottles washed up by the tide. Strange and fascinating creatures – but again, don't touch! http://www.australianfauna.com/bluebottlejellyfish.php 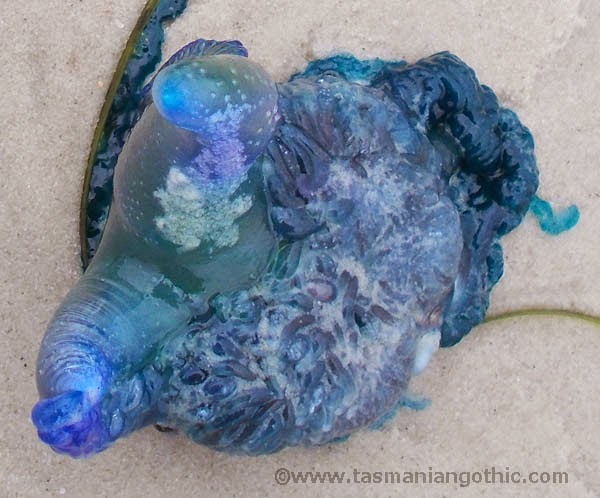 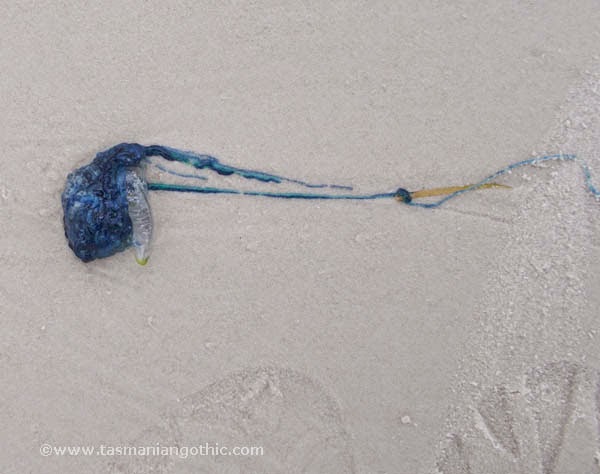 I have long known about the historic quarry at Spring Bay, but this was the first time I had actually visited it. The quarry operated from about 1855 to the mid-1880s and provided stone for various official buildings in Melbourne, including the Law Courts, Town Hall, National Bank and the GPO. (ref. Leaman, David. Walk Into History in Southern Tasmania.  Leaman Geophysics. Hobart. 1999. p. 175) 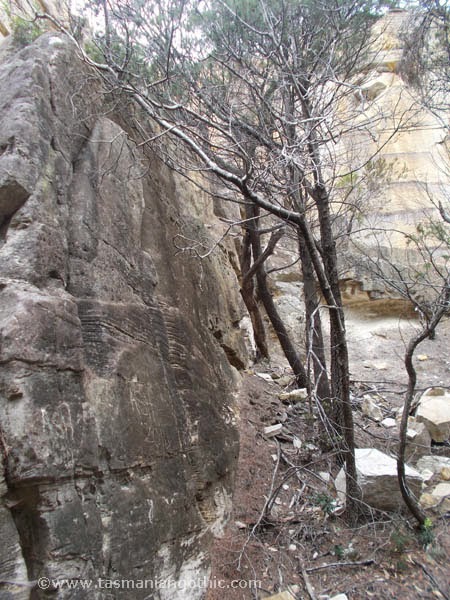 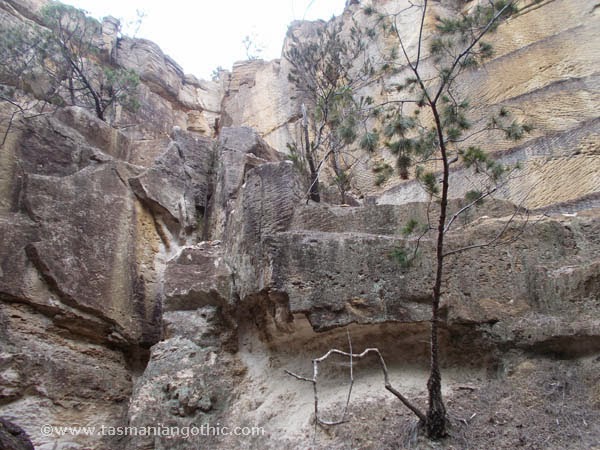 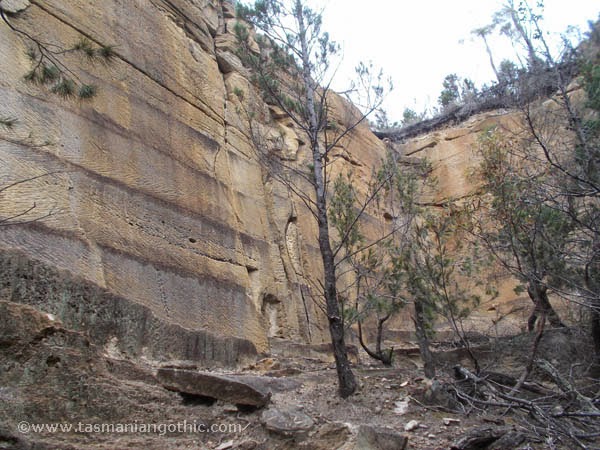 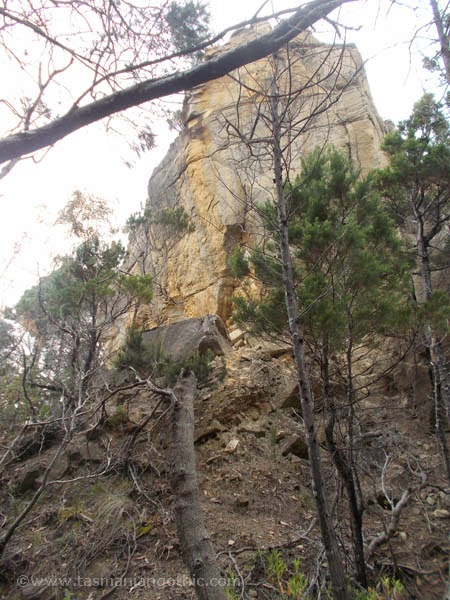 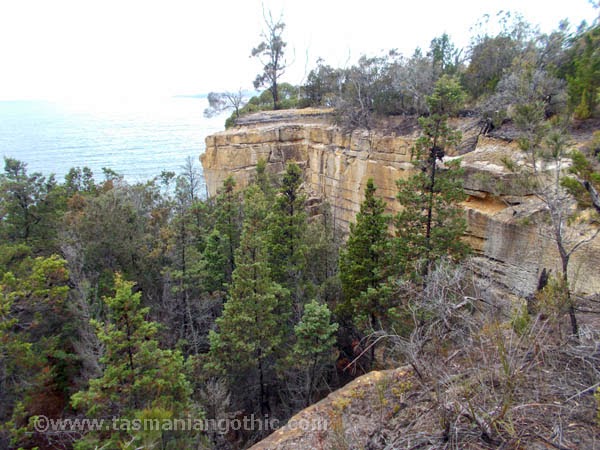 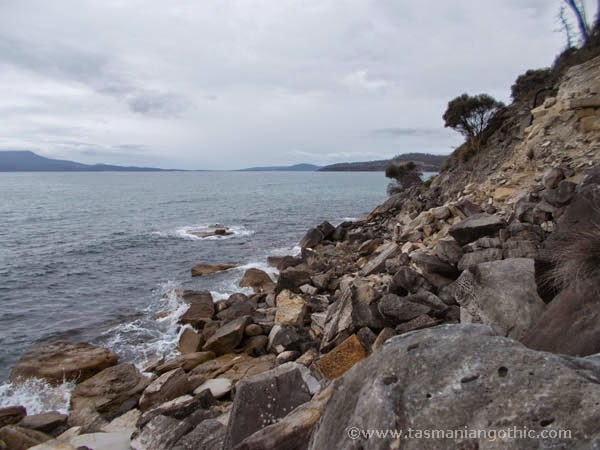 Ships were brought in and moored to ringbolts for loading; there is still a ring in the rock in the centre of this picture, and a second on another rock somewhere off to the left. The quarry is directly above this slope, and wooden derricks swung stone from the trolleys to the ship.  Louisa Meredith (quoted by Suzanne Lester in Spring Bay Tasmania; a Social History. Artemis Publishing and Marketing Consultants. Hobart. 1994) describes a wide platform covered with immense derricks for loading ships, and these are clearly shown in the1880 photograph in the same book.

You might make out a member of our party picking his way between the rocks. 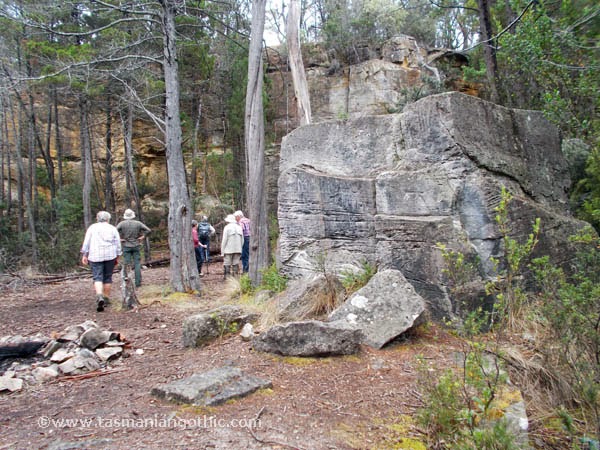 This block formed the footing for equipment used to move the cut stone. I guess that as rock was removed from the quarry it outlived its usefulness; it stands alone and abandoned in the 1880 photograph.

Lester tells us Swordfish made the return trip to Melbourne and back in 54 hours.


Loading must have been tricky in rough weather. On the night of 24/25 April 1880 there was a terrific gale and Rocket, bound for Launceston, was wrecked at Bicheno with the loss of all five people on board. She had delivered stores to Schouten Island after picking up 20 tons of freestone from the Orford quarry. Local legend has it that she was overloaded, but she was only one of half a dozen ships wrecked along the coast that night (others were Guiding Star, Venus, Robert Burns,Offley, and Italy). 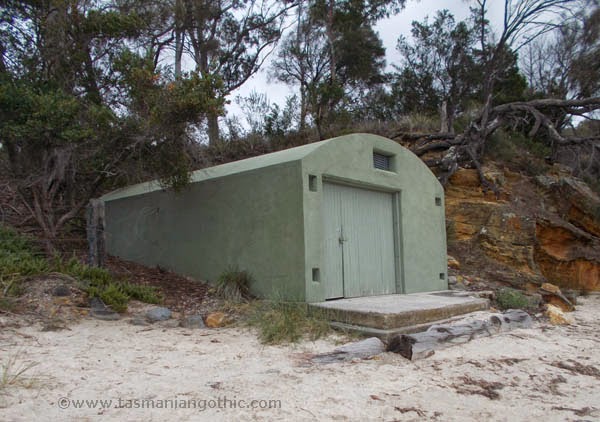 And while we're on the subject of boats and building materials – this industrial-strength boat shed was built by the Hurburgh family during the second world war. Local wits suggested that while building materials were generally in short supply, cement was available for anybody wishing to construct an air-raid shelter, hence its unusual appearance. Half a century later later a rather silly joke has become part of the local folklore; yet another reminder that you shouldn't believe everything they tell you. Anyway, it's a pretty good boatshed.
Posted by Elizabeth Barsham at 2:51 AM 3 comments: