The Grand Bazaar in Istanbul is magnificent, but there are a lot of things you can't buy there. I've found a few on my travels, so here's my top-twenty Wish List if somebody has the power to grant these things.

1. Any one of these little prehistoric figurines in the Israel Museum. Unfortunately I've lost the sketchbook in which I wrote down the details, but you can see what they are.

2. Only about 60cm high, so will fit on the mantelpiece nicely. The Greeks adopted figures like this from the Near East in the seventh century BC, and they were popular guardians on funerary monuments. I'll be in that. But not for a few years yet.

3. What is it about things with wings?

4. Ivory with ebony inlay; figures battling a dragon. I think it's from the early seventeenth century. And it's part of the Wuerth Collection in the Bode Museum in Berlin 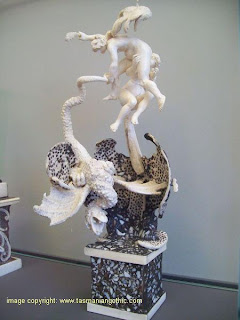 5. Actually a bit bluer than this. Lead glazes are difficult, so pieces are rare. But I can imagine this sitting among the mugs in my kitchen. According to the postcard I bought it has an inscription that roughly translates as “Buy and Use”.


6. And moving right along, to a Vanitas from France or Netherlands. This is supposed to remind you that life is fleeting and you should be thinking of spiritual things rather than earthly.

7.  Some time in the last five hundred years the child has gone AWOL but I don't really mind. The workmanship is beautiful and I just love the draperies. Rather smaller than it appears here; less than a metre high.

8. An old and battered piece of wood-carving in the Bode Museum

9. Another goddess – Artemis from the temple at Ephesus. There are a lot of depictions of her about. This is one of three in the Ephesus Museum.

Way back in prehistory wooden cult figures standing in temples were decorated with jewellery, and a set of large gourd-shaped amber beads formed a type of breast-jewellery in the eighth-century BCE at the Great Temple of Ephesus. Contrary to popular opinion, Diana/Artemis doesn't have any more breasts than anyone else; the amber beads just got bigger and bigger over the years. Which is not to say there might not be a certain amount of symbolism here . . .

She was in charge of hunting, wildlife and fertility. The Greeks called the ancient Ephesian figure Artemis, but to the Ephesians she was always something special and different from all the other Goddesses of the same name.

10. So here is one of the other Dianas – sorry about the reflections, but they will put these things in glass cases where I can't get at them. It's silver, set with rubies, emeralds, diamonds and pearls.


11. Although this is called the Berlin Goddess, she's really a funerary statue from the grave of a wealthy Greek lady. I particularly liked the stylised planes of the face, and did some nice drawings of it for future reference. The red colouring is a trace of the original paintwork.

12. And while we're on the subject of goddesses, here's a lovely big granite statue of Sekhmet.

There are two of them, one each side of a doorway.


13. Particularly liked the anthropomorphised face. It's only a sandstone copy of a Ptolomaic lion in Rome, but quite good enough for me. A warning, though: it's pretty big.

14. Everyone has lions of some sort, and I found plenty to admire and desire. But cats?

These bronze cats were produced in 1910 to guard the first, steel, Baumgartenbruecke in Germany.

The bridge was blown up on 30 April 1945 and the cats followed the Russians home.

They were returned in 1994 and set up here, beside the rather boring new, concrete, bridge that replaced the old one.

The cats were lucky.


15. This was one of the works of art transferred to the Flacktower at Friedrichshain for safe-keeping during WWII. Shortly after the war officially ended a mysterious fire broke out in the bunker, and most of the works were destroyed.

A few were salvaged, and the remains of three are on show in the Bode Museum, with photographs of their original appearance.


And that's all I'm going to say about the war.

16. Who wouldn't want this? I found it at the Artbanka Museum Of Young Art exhibition in the Colloredo-Mansfeld Palace in Prague. It's definitely worth looking at their website: http://www.amoya.cz/en/ if you can't get to Prague to see the exhibition.

17. Still in Prague, at the Veletrzni Palace where the National Gallery of Prague has its 19th and 20th century and Contemporary Art collections.

18. More 19th - 20th century art from Prague. Gorgeous gargoyles on St Vitus Cathedral. It took 600 years to build the cathedral, and the western facade was designed in the mid 19th century. It was completed in time for the St Wenceslas jubilee in 1929. Mucha designed one of the wonderful stained glass windows.
This facade is described as Gothic Revival, but it is not so much revival as a beautiful completion of a Gothic building.
19. This, however, is unashamedly Pretend Gothic in the grounds of Schloss Babelsberg near Potsdam.
It was erected by Friedrich Wilhelm IV after the March Revolution of 1848 in memory of fallen Prussian soldiers. The red sandstone archway is a copy of one in the cemetery in Karlsruhe; the statue of the Archangel Michael defeating the “dragon of revolution” is from the workshop of August Kiss.

20. If we're going for Pretend Gothic, why not just have Schloss Babelsberg itself? Apart from its history, which you'll have to look up for yourself, it's a jolly nice building, having been designed by Karl Friedrich Schinkel (who may well be my favourite architect) based on the English Gothic style, with a few Tudor elements and extended in 1849 by Friedrich Ludwig Persius, one of Schinkel's students.

It's being renovated at present, but I'll have it when the builders have finished, thankyou.

Wandering in Byzantium 2 - The Grand Bazaar

Istanbul is famous for a few things, but one of the most famous is the Grand Bazaar.


Everywhere you go people are trying to attract your attention - they are usually trying to sell you something, but that doesn't make it any less entertaining. And goods are set out for sale in all sorts of places. 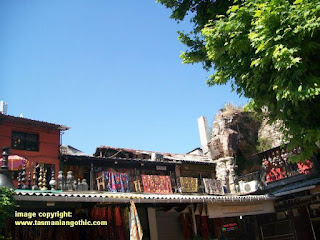 There are ordinary shops selling things displayed in real windows with price tags and all, for those who prefer that sort of thing. 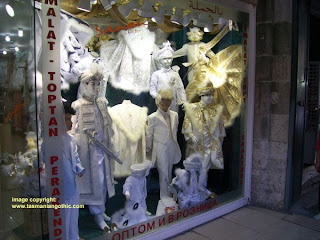 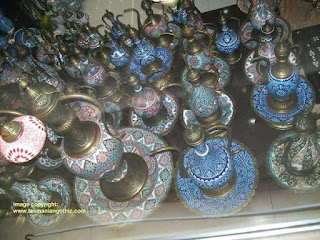 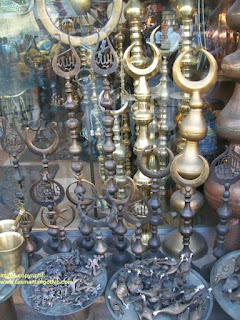 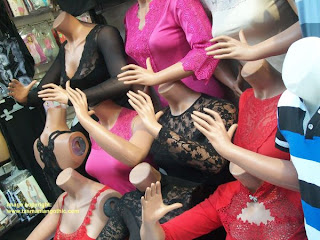 But these weren't nearly as much fun as the Bazaars. 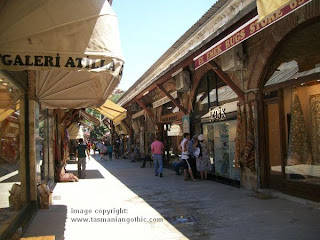 This is Arasta Bazaar in Sultanahmet. Compared to other parts of the city it is quiet and the pressure to buy a scarf or a carpet isn't as insistent as elsewhere. A very pleasant place for a stroll. 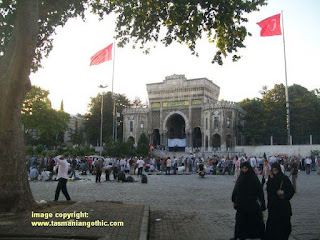 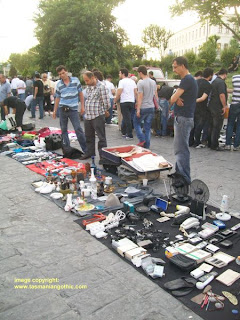 Every evening this informal market appeared in Beyazit Square, in front of the Istanbul University. Things were bought and sold, but it also seemed to be a great excuse for a lot of men to get together for a bit of gossip.


Eventually you have to admit the Grand Bazaar is unavoidable

There have been markets in this part of the city for a long while; in Byzantine days the slave market was here, but you could buy pretty much anything else you needed too.


The present day Bazaar begin in 1455/56 when Sultan Mehmet II, who had put an end to the Byzantine Empire and become the first Ottoman ruler of Constantinople, had a building erected as a textile market. Either a few years or a century later (depending on which book you read) the textile market moved to a new building and the earlier one became a market for luxury items.


The area between them became a maze of shops and stalls and before long it was obvious that a completely new commercial district had developed.


By the middle of the seventeenth century there were more than sixty streets, it included mosques, squares for public prayer, fountains, and eighteen gates that were closed every night and opened for business in the morning. There were more than 3,000 shops. Here are three of the gates. 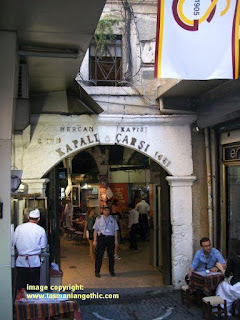 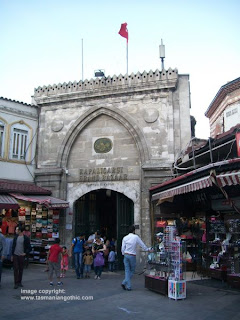 Around the outside were many large caravanserais where merchants were lodged and could store their goods; these incorporated another 300 shops. And you thought your local Rose Gardens Eastside Plaza Shopping Mall was big! Still, only the two original buildings were covered. Most of the market was open to the sky. 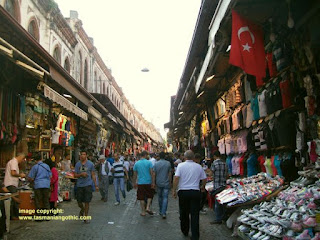 This is what it probably looked like originally – well, substituting ancient fashions and materials for the modern ones. What I'm getting at, is that goods were displayed outdoors under awnings.
As time passed the awnings became more substantial, and eventually the entire street was roofed over. This had obvious advantages, so the local authorities did the job properly. And thus was the Grand Bazaar created. 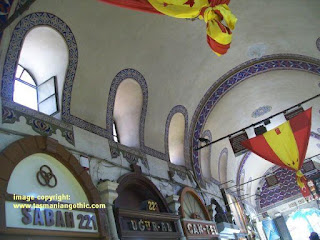 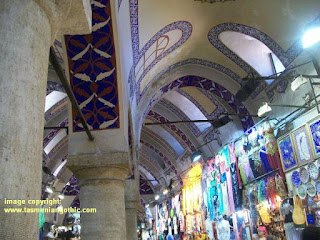 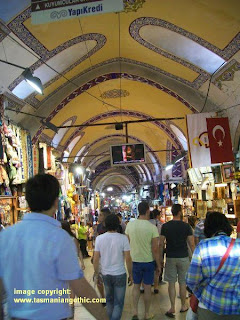 I found the buildings as interesting as - well, almost more interesting than the goods on display.

The Bazaar has been struck by various calamities, mainly earthquakes and fires, including a fire in 1660 that destroyed most of the city. Much of it was roofed over for the first time after a particularly fierce fire in 1701. The area was reduced in size after earthquake damage in 1894, but there have been a couple of fires since, the last big one in 1954. Restoration took five years.

Now there are twenty one gates, but five main ones. I did my usual trick of plunging in and getting lost so I've no idea which ones I went in and out. I do know, however, that when I passed the same drinking fountain for the third time I decided I should start making left turns instead of right ones.
Here are some photographs that hardly do it justice. I can't tell you where in the Bazaar they are because I have absolutely no idea, but it probably doesn't matter. 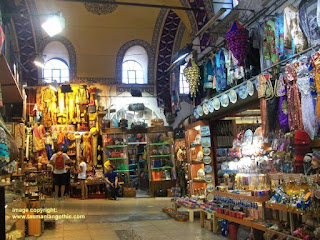 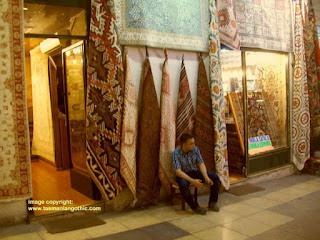 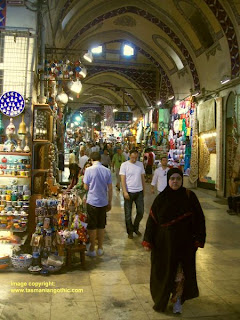 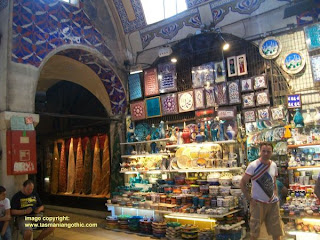 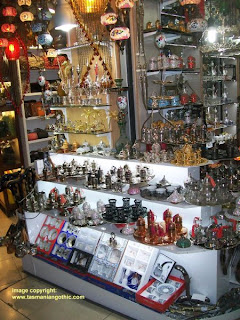 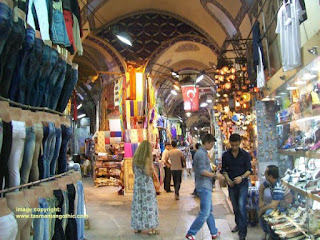 There were a lot more people around than these photographs suggest, but if you wait patiently enough there are brief moments when everybody moves out of shot. Sometimes you manage to catch that moment.
I visited the Bazaar several times, and wandered at random. Fantastic way to pass an afternoon.

And, to finish: the compulsory cat photo.

Posted by Elizabeth Barsham at 12:03 PM No comments: