Jonathan Swift was very precise with the location of Lilliput, placing it to the north west of Van Diemen's Land – that is, his imaginary country was closer to home than the real island. 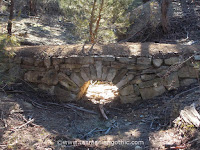 Tasmania might not be as exotic as Lilliput, but the first intrepid British settlers found it strange enough as they moved their flocks and herds into the South East, the Midlands and the fertile North-west, clearing land, planting crops and turning the country into a copy of England. Government road gangs followed, transforming muddy tracks into coach roads and building bridges at river crossings. Tasmania is famous for its convict-built bridges, although you probably won't recognise this one. It isn't very old and it isn't very big – in fact, you might call it Lilliputian.

You  might not recognise the name Bigge's Bridge either, but you will certainly recognise the bridge. It is, of course, Richmond Bridge, the oldest stone bridge in Australia. 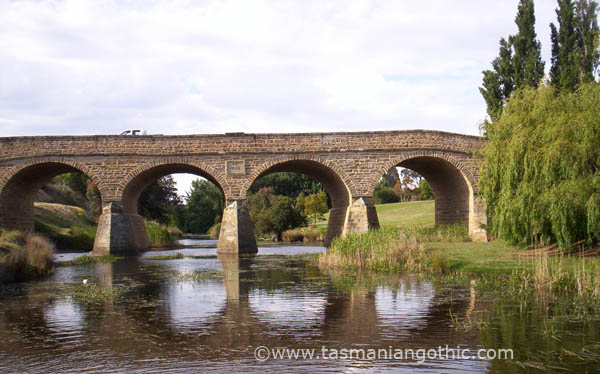 At this time Van Diemen's Land was still officially part of New South Wales. When he visited in 1821 Governor Lachlan Macquarie  named the town in the Pittwater area after Lieutenant Governor William Sorell,  who duly authorised and began construction of Bigge's Bridge. By the time it opened in January 1825 Sorell had been replaced by George Arthur.

A year later Van Diemen's Land was officially separated from New South Wales and Arthur embarked on a programme of infrastructure development, continuing the good work begun by his predecessor. 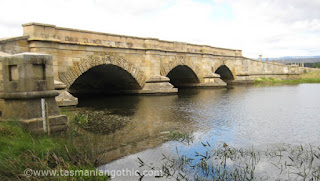 New roads were built, old ones were improved and bridges were constructed. Ross Bridge, "justly considered the most beautiful masonry bridge in Australia"1, Tacky Creek bridge on the other side of Ross, the Bridgewater causeway, and the Red Bridge at Campbelltown were all authorised, if not completed, in Arthur's time. These public works were continued by successive governors, serving travellers to the north, south-east and east of Hobart. By January 1847 when William Denison  arrived to govern the colony, only the west and south-west remained undeveloped and inaccessible

According to the tastrails website, climbing The Needles is one of the best and most unknown short walks in Tasmania. This is the view from the top. The rugged mountains are the Thumbs, separated from the Denison Range by the Gordon River Gorge. The Tiger Range is in the middle distance, between the Gordon Plains and the Florentine Valley.

Various intrepid surveyors had battled their way through forests, clambered over mountains and sploshed across buttongrass marshes in the forty years before Denison announced plans to open up the New Country by building a road to Port Davey. Dismissing reservations about the suitability of the country for farming or whether the economic return would justify the expense, he authorised construction of the first fifty miles of new road. The first, and most expensive, requirement was a new bridge over the Derwent River.

On Tuesday 3 December 1850 the Colonial Times in Hobart reported: We hear that it is in contemplation to construct a timber bridge of framed lattice work across the Derwent at the rapid near Dunrobin. The bridge will be about 320 feet in length, supported in the centre on two piers of an elliptical shape 100 feet apart, and at the ends by timber abutments, as may be required.
Mr Adye  Douglas MLC,  in a Legislative Council Estimates Committee hearing, observed it was unusual to build a bridge to explore a country rather than exploring the country then building a bridge2.   Denison ignored him, confident that if he built it, the farmers would come.

A probation station, one of the last in Tasmania, was established on Walter Bethune's property Dunrobin a few miles north of Hamilton and a temporary log bridge constructed.

Ten months after work began, the Lieutenant-governor visited the district and decided on a more practicable position, about half a mile below that at first fixed upon. The alteration will save considerable time and labour.3   Not a propitious start to a major construction project.

The first stone of the Dunrobin Bridge was laid on Wednesday afternoon [12 November, 1851]; the inclemency of the weather prevented the ladies from witnessing the ceremony. W. A. Bethune, Esq, gave an elegant entertainment to a party of his friends on the occasion. The road from the bridge to the New Country goes through Mr. Bethune's estate, and the bridge, when finished, will be second to none in the magnificence and solidity of its structure. 4

Between sixty and seventy prisoners were employed cutting sandstone from a nearby quarry and bringing it by punt to the bridge site. Francis Burgess, Chief Police Magistrate, went to Dunrobin, inspected the station there, and expressed his surprise at its discipline, and the progress of the bridge there erecting.5  but despite initial enthusiasm and Mr Burgess' satisfaction, work proceeded very slowly. The inclemency of the weather was only one reason.

DENISON'S FOLLY AND THE “DONE-BROWN” BRIDGE

Richmond Bridge was in use less than eighteen months after the foundation stone was laid. Ross Bridge took three years because of blatant pilfering of building materials and convicts wandering off to work for private citizens – two circumstances that go some way to explaining the proliferation of fine stone houses in the district. Once a new supervisor was appointed and the convict stonemasons Daniel Herbert and James Colbeck were sent to Ross there was no more of that nonsense; the bridge was completed and Herbert and Colbeck received their emancipations. The construction crew then moved to the other end of Ross to build the Tacky Creek bridge.
So it's hard to see why Dunrobin Bridge was still under construction in 1854 when a flash flood raised the river level 13 feet in 24 hours, washing away most of the scaffolding and tower platforms.

Meanwhile William Dawson, construction superintendent for the road-builders, had not done much better. The terrain proved more difficult than anticipated, the weather was foul and setting fire to the forests in an attempt to clear the land proved futile; vegetation grew back again immediately. By 1855 they had built a road from Dunrobin Bridge to the Repulse River, pretty much the route of the present Dawson's road. Land was reserved for future townships and the road, which was “good for horses, and could without much labour be made fit for wheel conveyances”6, continued westward, north of Mt Misery and Mt Dawson before descending into the Florentine Valley where a rough bridge had been laid over the river. It would be subject to flooding, but the surveyors said that wouldn't be a problem as nobody would be travelling in such weather. From there on, to the proposed township of Huntly on the plains near the Great Bend where the Gordon River takes a right-angle turn to flow through the gorge, the road was still little more than a foot track.

Mr Thomas Gregson MLC,  referring to the Report from a Select Committee investigating the Survey Department, said
a considerable public work, not Done-brown, but Dun-robin Bridge (laughter) had been constructed at a large expenditure of public money, and also a road leading to a part of the country where a large proportion of the land was perfectly worthless, and which was of use to but a very few interested persons.7

The project continued to be delayed by poor workmanship, lack of organisation, bad weather and rising floodwaters. Construction costs rose even faster than the river. Dunrobin Bridge and Dawson's Road, the Road to Nowhere, became bywords for folly, stupidity and government mismanagement.

A few farmers had made exploratory trips to the Vale of Rasselas and the Gordon Bend only to return immediately, disappointed and disgusted at the absence of grass, the general sogginess of the ground, the impenetrable forests and almost constant rain. One intrepid soul did make an attempt to settle in the district, but lost his entire flock of sheep when the river flooded. Nobody used either bridge or road.

Towards the end of 1859 James Calder inspected the road and discovered it already in need of clearing as the forest grew back. By the 1870s it was practically impassable. The embarrassing Road to Nowhere was quietly forgotten. Only an occasional farmer or hiker took advantage of the magnificent bridge until a disastrous flood in 1952 washed away the wooden decking. There are photos of the wreckage in the State Library.

In the 1960s the Hydro Electric Commission built a concrete-buttressed dam across the Derwent, forming a small reservoir to feed Meadowbank power station and submerging what remained of the old bridge piers. Much of the stone had already been "salvaged" for local building projects. A utilitarian concrete bridge now crosses the dam about 30 metres from the original site. The forest reclaimed Dawson's Road; forestry work in the 1940s finally obliterated almost all trace of it.


The Dunrobin Bridge was pretty much the last major convict bridge-building project.

Transportation of British convicts to Tasmania ceased in 1853, but even before that convict labour was increasingly being replaced by wage-earners who, faced by the prospect of losing their employment, worked harder. As time went by the last of the "old lags" passed on and the probation stations and penitentiaries closed. Denison's dream of a road to Port Davey through productive grazing land and pleasant farms remains unrealised. But Tasmanians don't easily give up their traditions. 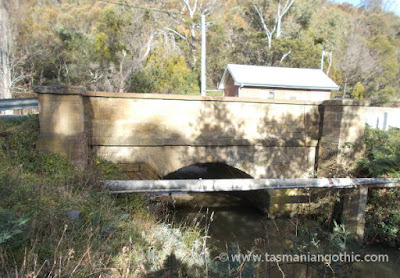 You might not recognise this practical bridge, constructed in 1838 and rather spoilt by a modern water pipe. But you may well have driven over it on many occasions – it's on the East Derwent Highway a kilometre or so from Risdon Cove.

Less than a kilometre away from it is this pretty footbridge. 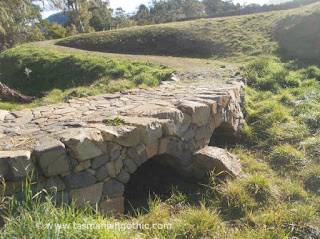 A new network of walking paths and footbridges is under construction around Risdon Vale and Geilston Bay. The builders are inmates of Risdon Prison under supervision of a master stonemason. In comparison to the roads and bridges constructed by Sorell and Arthur this is not an enormous project, but these days bridge-building is a privilege, not a punishment. 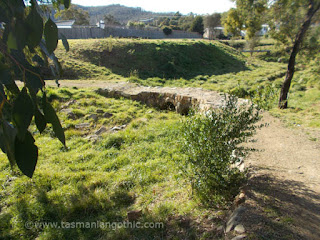 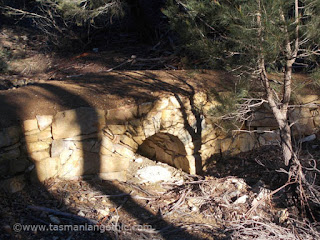