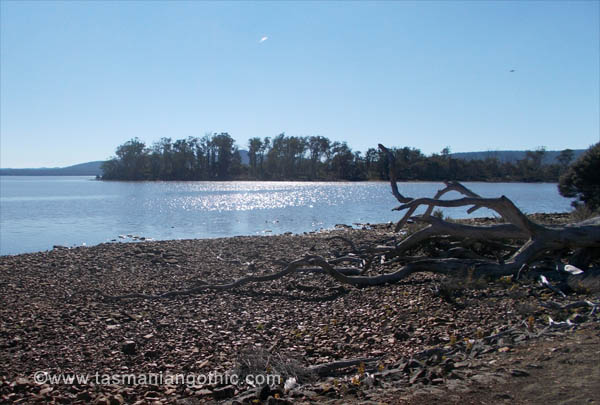 We had a delightful sail to various points of the lake. The air up in these regions seems even purer and more elastic than in other parts of the island, the verdure brighter, the foliage richer; and as we float here at our ease, we are willing to believe that no lake on earth is more beauteous than Sorell.
John Mitchel 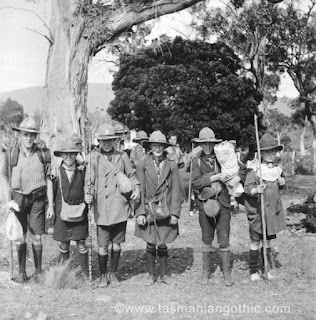 This well-equipped boy scout troop is part of a contingent of more than a hundred eager lads from all over Australia who detrained at various points between Tunbridge and Ross and hiked in to camp near Dogs Head for a weekend of energetic activity in 1927.

In 1933-34 a similar event was organised, this time on the Dogs Head itself. A camp site was established and a stone circle with a flagpole in the middle was constructed to mark the corroboree ground. 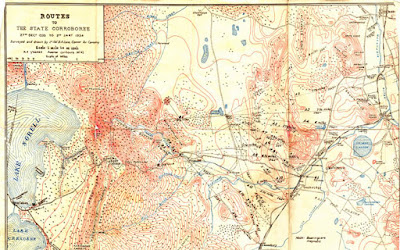 One does not simply walk in to Dogs Head these days 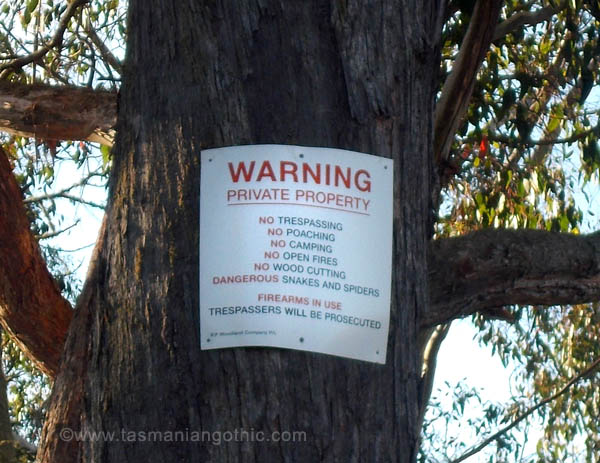 After much persistent detective work and many emails our walk co-ordinator managed to track down the current owner to get permission to enter the property. The manager arranged to drive over from Waddamana, unlock the gate, and warn the shooters of our presence. We turn up to meet him at Interlaken on a sunny Sunday morning.

The area on this side of Lake Sorell could hardly be described as pristine. Sheep and cattle have grazed here since the early nineteenth century, generations of wood-cutters have harvested fenceposts and firewood. The bush is criss-crossed by a maze of old tracks used by shepherds, woodcutters, fishermen and shooters. 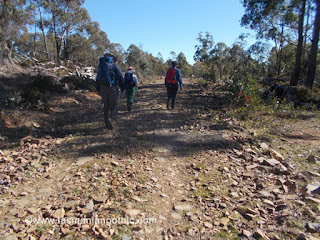 There are two very serious new roads into the property, but as Bushwalkers we scorn the well-marked route and strike off into the scrub following a compass bearing.

The first thing we find is an old log-loading ramp, a good place for morning tea. 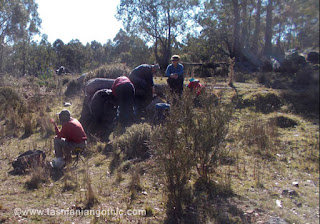 A visitor to the area a couple of years ago has given the co-ordinator a map with various interesting features marked on it, and the intention is to visit each in turn, making a relatively short, easy walk into an entertaining treasure-hunt. Item number one is a volcanic plug. None of us has been here before; nobody knows what to look for.

We finally settle on a stony protruberance at the highest spot on this part of the map. 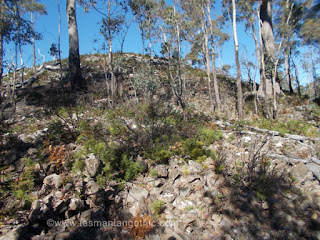 Having achieved our first objective, we plunge into the bush again. 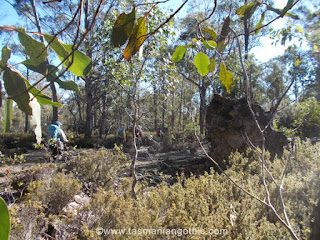 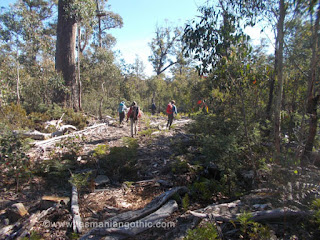 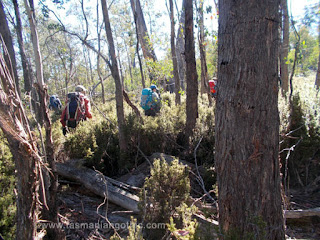 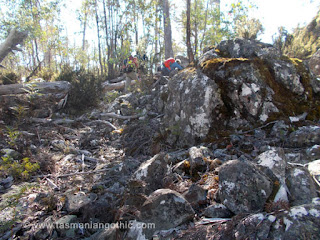 We follow an old snigging track, bash our way through a lot of totally unnecessary shrubbery and scramble over some rocks just because they're there. 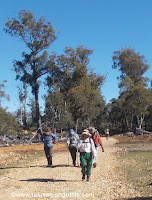 At last, feeling we've proved our point, we relent and return to the road, which leads us straight to our next objective – the remains of Thomas Meagher's house.

The "Dog's Head" . . . is a fine promontory running about a mile out into the lake, and fringed all round with noble trees. In a snug cove at the northern side of the "Dog's Head" is a stone house inhabited by the shepherd in charge of a large flock belonging to a Mr. Clarke.
We pass the Dog's Head promontory, and enter a rough winding path cut among the trees, which brings us to a quiet bay, or deep curve of the lake, at the head of which, facing one of the most glorious scenes of fairy-land, with the clear waters rippling at its feet, and a dense forest around and behind it, stands our friend's quiet cottage. On the veranda we are welcomed by the Lady of this sylvan hermitage, and spend a pleasant hour, till dinner-time, sauntering on the lake shore.

It was 1851, and John Mitchel, on the way home from Ross to Bothwell, was visiting fellow-exile Thomas Meagher and his wife Catherine. This is the view he was describing; we stand in front of Mr Meagher's living room fireplace on the shore of Lake Sorell, with the Dogs Head in the middle distance. 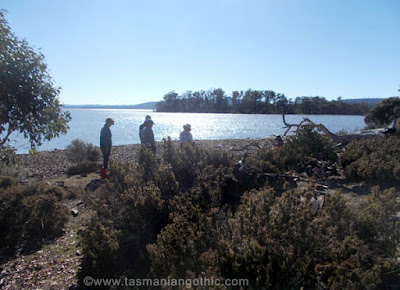 Mitchel and Meagher were two of six Irish Exiles transported to Van Diemens Land for their part in the 1848 rebellion against British rule. As political prisoners they were regarded, and regarded themselves, as superior to the rest of the convicts.

Having given their word they would not attempt to escape, the Irishmen were allowed to live as free men, provided only that they remained in their specified district and reported to the police each week. Intelligent, educated men, they quickly made friends among the settlers and to all intents and purposes settled in to colonial society. Meagher bought the land at Lake Sorell, built a house and married a local woman, Catherine Bennett. He planted oats and potatoes, kept livestock and had a couple of men working for him. Mitchel's wife and family came from Ireland to join him at Bothwell.

Although the Irishmen were not supposed to have any contact with each other, four of them, John Mitchel, John Martin (both of whom lived at Bothwell), Kevin O'Doherty and Thomas Meagher were, according to Mitchel  in the habit of meeting almost every week at those lakes [Meagher's house], which is against rule to be sure, but the authorities connive at it – thinking probably that no great or immediate harm can accrue to the British empire thereby.

On the surface they appeared to have accepted their fate, and, indeed, both Meagher and Mitchel greatly admired the Tasmanian landscape and climate and, grudgingly, some of its people. However, their political aspirations and their determination to return home remained unabated and one way or another each of them “formally withdrew his parole” and escaped over the next few years. Meagher's house fell into ruin and all trace of the oats and potatoes he had planted vanished. His son Henry, born a few weeks after his escape, died in infancy and is buried in the Roman Catholic cemetery at Richmond. Catherine sailed for Ireland in 1853 where she died a year or two later at the age of twenty two. Meagher himself drowned in the Missouri in 1867.

Having lunched in Mr Meagher's dining room and ticked off item two on our list, we follow the shoreline to a pretty beach along the side of the Dogs Head. 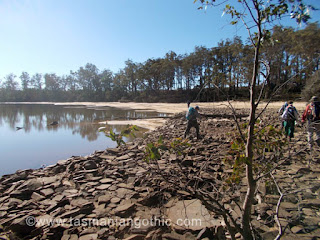 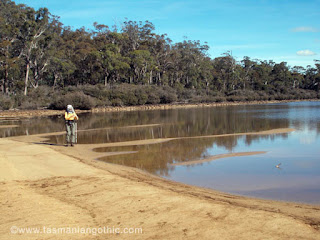 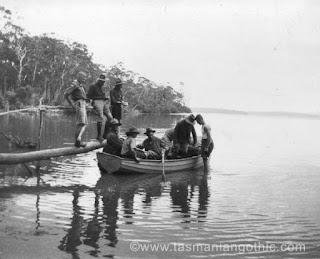 Mitchel remarked that below Meagher's house a little wooden jetty runs out some yards into the lake; and at anchor, near the end of the jetty, lies the "Speranza", a new boat built at Hobart-town, and hauled up here, through Bothwell, a distance of seventy-five miles, by six bullocks.

The friends enjoyed several pleasant excursions on the lake, the beauties of which Mitchel described in extravagant terms. The scouts enjoyed it, too, although they probably didn't write about it quite so eloquently. 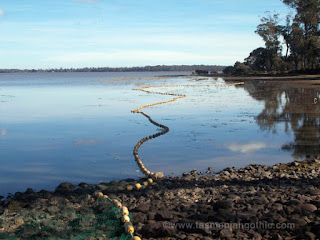 We, alas, had no boat. In fact, Lake Sorell is currently closed to boating and fishing as the Inland Fisheries Service works to eliminate European Carp, first identified here in 1995. Carp can only spawn in the warmer shallows around the edges of the lake, and nets to exclude them from these areas are proving effective. Various measures have been taken to eradicate the fish from Lake Crescent, and it is hoped they are all gone from Lake Sorell. Until this is confirmed, however, the lake remains closed.

Our next objective is the Ice Folds. None of us knows what they are, either, but according to the map they are on the other side of Dogs Head. 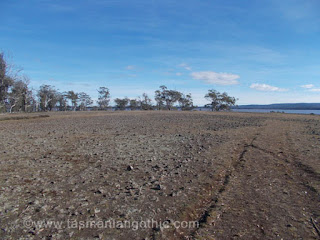 The top of Dogs Head is a boring, barren, rock-strewn paddock with a few trees around the edges. On the far side, however, it proves anything but boring. The rock looks as if it has been split away from the side of the promontory; or like the ruined defensive walls and trenches of a vast and ancient fortification. For me, this amazing formation is the highlight of the walk. Tick number three. 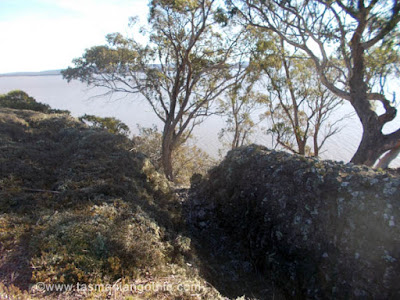 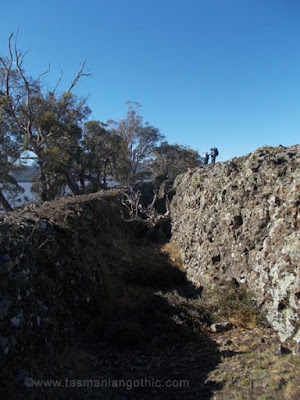 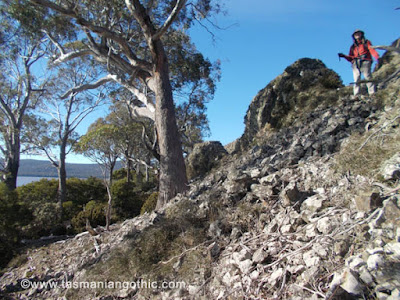 Our next objective is an eagle's nest. I can't resist photographing this gothic arrangement as we retrace our steps along the promontory 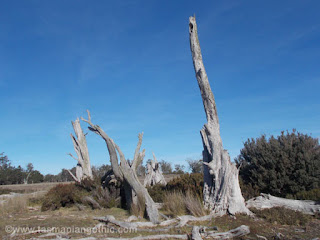 After stopping to inspect every stand of trees somebody suddenly spots the nest – up there! 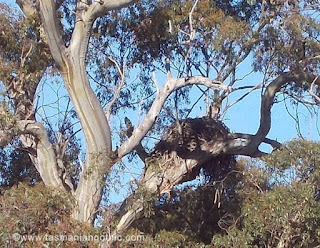 The afternoon is drawing on and it is decided to forego a visit to the site of the shepherd's hut, mentioned by Mr Mitchel and marked on our map. But the Corroboree Ground is a must.

In fact, it's not far past the eagle's nest. There is a small cairn where the flagpole once stood; the cement is crumbling from between the rocks, but the date, “1933” is still legible on the top. Around it is a large circle of stones set neatly in the ground. 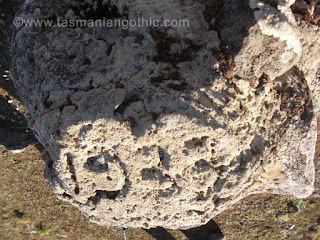 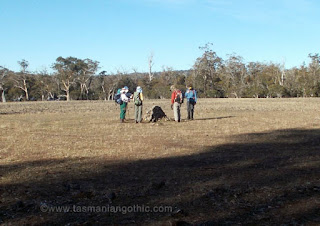 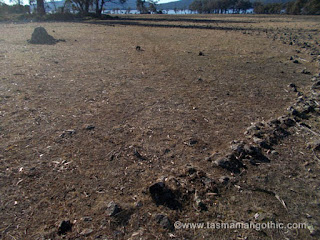 Having congratulated ourselves we set off happily to hike back to the gate. No messing around this time – straight down the road. The manager and his wife are waiting for us along the way. We chat for a few minutes then it's back to the cars and home. We have completed our quest! 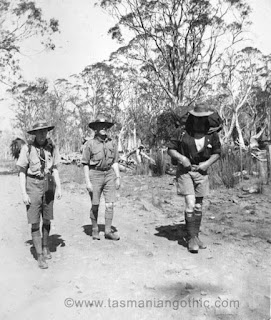 ref: quotations are from Mitchel. John. Jail Journal, Or, Five Years in British Prisons. New York. 1854
Posted by Elizabeth Barsham at 1:01 AM 1 comment: