Ghosts in the Landscape - installation at Salamanca Arts Centre, September 2015 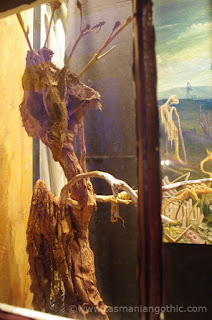 Every so often I amuse myself working in three dimensions; it's fun, and a break from painting. I suppose you could say it's a hobby as I don't think of what I'm doing as art. However, I like to show it off sometimes as an extension into the real world of the imagery in a painting.

Shopfront windows such as the Lightbox at the Salamanca Arts Centre are an ideal place to show them – available for view day and night by everyone who passes by, but safe from prying fingers.

This installation can be seen from 1 - 30 September, 2015 at Salamanca Arts Centre, Salamanca Place, Hobart.

Ghosts in the Landscape features a painting called McRae's Hill, inspired by photographs I took on a cousin's farm several years ago.

There is a romantic sense of decay and mystery about an old farmhouse abandoned in a back paddock, slowly crumbling back into the earth.

I added figures rising from a pile of unidentifiable detritus like buds of new life sprouting at the end of winter, and I liked them so much I assembled some stick figures from bits of wood, rag and wire. 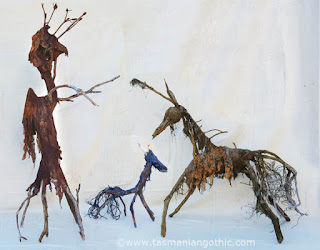 There are remnants of decaying machinery rusting away around the sheds on my overgrown family farm, and I gathered up some of the smaller pieces. The figures have been painted with iron oxides to match the colours of these broken relics.

Each scrap of rotting metal was once part of some useful, functioning implement, its original purpose long forgotten. More than three quarters of a century exposed to the elements has rusted them beyond recognition.

The figures, on the other hand, are brand new but frivolous, fragile and ephemeral as memory.

Posted by Elizabeth Barsham at 12:44 AM No comments: