We all lose things - pens, car keys, pets; some things leave bigger holes in our lives than others. What happened to things we lost many years ago? Where are now? It was a small step from there to thinking about being Lost in the Bush, which is not a very ancient phenomenon. Almost every year somebody disappears without trace into our wilderness.

In the early days Tasmania, off on the opposite side of the world, was a strange and alien place for Europeans  and those sent there really were lost to their friends and family. We know what happened to many of them. Life on the island, in its mountains and forests, changed them into something their families may not have cared to recognise. For better or worse they became something different. They became Tasmanians. And they began to tell their own histories.

Some of the tales are well known. Some of the events really happened, but are not particularly well known. And some of them I just made up. But I'm not going to tell you which is which.

Australian literature is full of tales of children lost in the bush. Most of them are tragic, verging on sentimental. But what if . . .

Some children might not be lost at all. Some of them might be perfectly happy growing up feral. Parents might not want some of them back once they discovered what they had become . . .

The McCrae family arrived in Tasmania early in the nineteenth century, taking up a land grant in the Bracknell area, close to the foot of the Western Tiers. They built a brick farmhouse in the accepted Georgian style on a low hill in the scrub, called it McCrae's Hill, and settled down to farming. They were probably happy there.

One evening they were sitting by the fire when there was a knock at the door. Mr McCrae went to answer it, came back to his wife to tell her he was going out for about ten minutes - and was never seen again. Well, that's not quite true. They found his body stuffed in a hollow log some days later. Nobody ever found out who, why or anything else.

But what of Mrs McCrae - what did she think had happened? How soon did she begin to worry - after ten minutes, an hour, next morning? What did she do? I don't know. But the ruins of the farm house are still there, and if they aren't haunted, they should be. 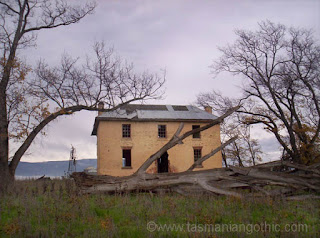 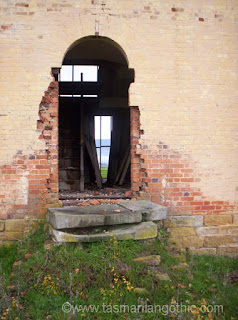 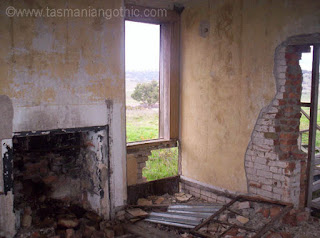 It is said that a couple of centuries ago a soldier became separated from his patrol when bad weather closed in somewhere on the foothills of Mt Wellington . . . His companions returned to barracks battered, wet and weary long after nightfall. Perhaps search parties were sent out when the weather cleared; but the missing man was never found.

To this day he wanders, still forlornly seeking the way back to his barracks, scrambling up rocky outcrops and over scree slopes, becoming more and more part of the alpine landscape. And from time to time on wild, wet, windy nights when sensible people stay home by the fire, a traveller on the Huon Rd catches a fleeting glimpse of a spectral horseman in red disappearing into the forest . . .

The List of Lost Things is a series of small paintings based on Tasmanian legends and tales from the bush. It is an ongoing project and more images will be added as I paint them.
Posted by Elizabeth Barsham at 1:03 AM 1 comment: