It was a squally, blustery day, perfect for visiting the lighthouse and watching the breakers in Currie harbour.
Currie foreshore is just as wild and rugged as anywhere else on the west coast; according to something I read, it is the only sheltered anchorage on the entire coast – and not too easy of access at that, with plenty of nasty sharp rocks lying in wait for the unwary sailor.  In fact, King Island must be one of the most deadly in the world – there were more than thirty ships wrecked around the island between 1862 and 1915. 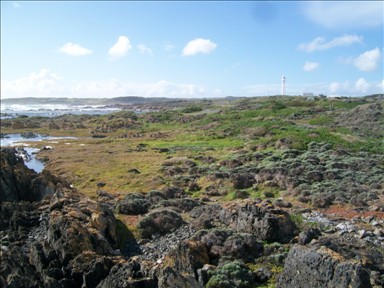 Blencathra was on the way to Sydney from Glasgow when her captain mistook the Cape Wickham light for Cape Otway – a common, and deadly error. Everybody was rescued  with assistance  from a salvage crew working on the wreck of British Admiral, which hit the island a couple of miles further south the previous May.  Those on board the British Admiral had not been so lucky - of eighty eight people only nine survived, and cargo and bodies were strewn along twenty kilometres of beach.


The captain and crew from Blencathra hitched a lift to Melbourne with a load of cargo salvaged from the British Admiral, and the wreck of their ship was sold to another salvage company. Despite an armed guard, seventy five of eight hundred cases of whisky from  Blencathra vanished without trace the night after they were unloaded. A successful shopping trip for somebody.
These are the rocks that did for Blencathra on January 3, 1875. They are only just out of sight from where I am sitting typing this. Nine years earlier and a few hundred metres further south  Netherby, carrying 452 passengers bound for Brisbane fetched up on the rocks after losing her bearings in bad weather.  Everybody managed to get ashore, and the second officer, Mr Parry, set out with eight men to look for habitation. Five days later he handed Mr W. Hickmott, the duty lighthouse keeper at Cape Wickham, a letter:

They were tired, hungry and footsore, but after a brief rest Mr Parry and the four strongest of his men set out for Melbourne in the lighthouse whaleboat. Landing on the Victorian coast near Anglesea they were mistaken for bushrangers by the first person they encountered, but managed to convince him they were nice people, really. The old shepherd guided them to a nearby station where Mr Parry borrowed a horse. He rode fifty kilometres to Geelong and telegraphed his news to Melbourne. Then he probably slept for about a week.
Meanwhile, Mr Hickmott went down to the wreck site to collect the survivors, who now included a very new baby.  Small groups of people straggled up to the lighthouse all night. The lighthouse keepers’ wives housed and fed them until they were collected and taken to Melbourne where a good many of them decided they had had enough adventures and stayed. I’m impressed that the lighthouse women managed to cope with so many people –  they must have done some mega-serious grocery shopping. 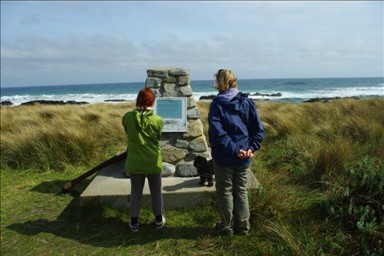 Cataraqui Probably the most famous wreck, one of Australia’s  worst peacetime  marine disasters, was in 1845 when Cataraqui, an emigrant ship with 369 passengers and a crew of 46, ran into horrible weather after about three months at sea. Captain Findlay could not get an accurate position, but believed he was about 50 miles southwest of Portland. He wasn’t. He was actually about sixty miles further south and the ship ran on to rocks in a heavy rain squall.
Many of the passengers were trapped below decks and drowned immediately, but about two hundred clung desperately to the ship for more than ten hours until it broke in two. By the time the ship finally went to pieces late the following day only nine people managed to get ashore alive. They were discovered by a party of sealers and eventually taken to safety a month later.

I walked with some friendly King Island artists to the  monument marking where 342 bodies were  buried in five mass graves. It is a bleak and scary place. (above) 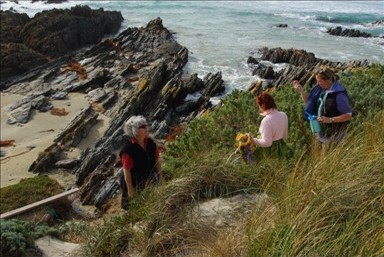 Having duly expressed our horror at the fate of Cataraqui we continued on our way along the shore until the rocks gave way to a windswept  beach where we all began hunting for bits and pieces washed ashore by the roaring forties. We soon had quite a collection of brightly-coloured sea-weathered rope, fragments of plastic, old brushes, a multi-branched sponge, bottle tops and similar treasures. “This is how we go shopping.” Alison said. Megan said “Tomorrow we’ll go to the tip”. 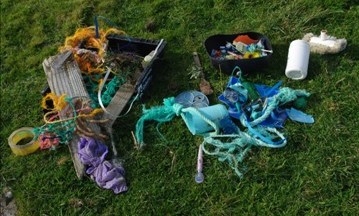 Posted by Elizabeth Barsham at 12:35 AM No comments:

Yesterday I drove down to Naracoopa, where, in 1802,  Lt Robbins explained to Nicholas Baudin in no uncertain terms that the Island was British, and where several ships have been wrecked. I think it is more remarkable to find a stretch of King Island coastline where there hasn’t been a shipwreck. The west side of the island, in the path of the Roaring Forties, is rocky and rugged; sand washes away there, but it is deposited on the eastern side. I asked whether this means the island is gradually creeping east, but the rocks aren’t moving. Perhaps the sand sneaks overland back to the west when nobody is looking?  Anyway, even the eastern side has lots of nice, sharp rocks. 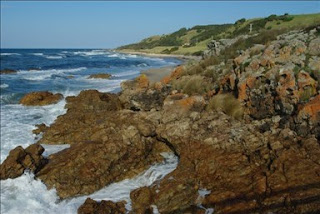 I found some interesting things to look at along the way.
KING ISLAND ADVANCED HYBRID POWER STATION 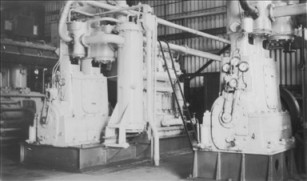 This is the Grassy power station in 1947, or thereabouts. It provided power for the King Island Scheelite mine, and for the township. Most people elsewhere on the island were still relying on kerosene lanterns and fuel stoves, although some had small electricity generators.  Towards the end of the 1940s Dad, with help from Bob Jordan, installed a 12v lighting system for the Church of England in Currie. 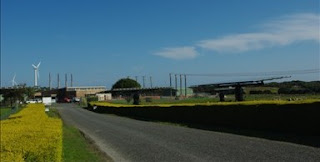 This is Hydro Tasmania’s Currie Power Station today. It has 9 turbines generating 8.55 megawatts. Four are Diesel, five wind, and there is a solar array.  Nearly half the island’s electricity is provided by the Huxley Hill Wind Farm.  The solar panels are self-tracking. So are the sheep.
There aren’t many sheep on the island; dairy and beef cattle are more usual. I have eaten a lot of cheese and yoghurt in the last couple of days; and more to come. Haven’t even visited the cheese factory yet!
FERAL FLOWERS 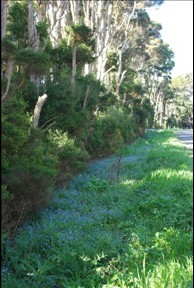 Other wonders are these paperbark melaleucas which grow so amazingly tall and straight; on the coast they are short and twisted, the shape I expect. But away from the coast they are pretending to be gum trees, replacing the huge eucalypt forests destroyed by the sealers and the early settlers. Just as surprising are the forget-me-nots in the grass by the roadside. Everything is so lush here!
RIVIERA ARCHITECTURE
The locals refer to Naracoopa as their Riviera. It is on Sea Elephant Bay, on the sheltered east side of the island, with a long, beautiful beach. It even sports a bit of super-kitsch: 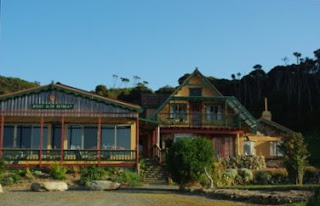 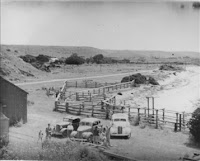 I was trying to locate the spot where Dad photographed a picnic party, but the area has changed, and I’m not certain whether I was in quite the right spot. The King Island Harbour Authority has replaced the old sheds in the old photographs with new sheds which have become old and subsequently suffered an Art Attack. I do like the way the broken window becomes a dolphin. 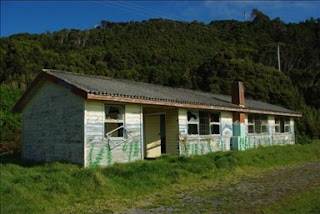 Had an extra splendid bonus today – there are big celebrations in November for the sesquicentenary of the Cape Wickham lighthouse, and the organisers were inspecting the site today as part of the planning process. So I went along with Sally. Beautiful warm, sunny weather, lots of wonderful rocks to draw. AND we all climbed up to the top of the lighthouse, which is usually closed to the public as it is still a serious working light. Great photos.

Here we are admiring the view from the top of the tallest lighthouse in the southern hemisphere. 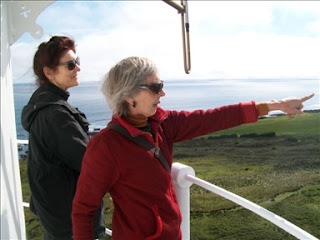 Original plans for the lighthouse were drawn up in 1855. This was for a masonry structure, but there were suggestions a prefabricated cast iron tower would be simpler to erect. W.B. Falconer, an engineer from Launceston, estimated a building cost of 19,507 pounds for the masonry tower as opposed to 23,743 for the prefabricated building, and in the end he was proved correct – following his plan, the project was completed at a cost of 18,533 pounds.

Granite for the walls, which are eleven feet thick at the base, was quarried locally and brought about a mile overland by tramway; all other materials had to be brought in through the surf and rocks – with great difficulty.

The first entry in the Cape Wickham log book reads:

Haven’t decided yet what to do tomorrow, but I’m sure it will be interesting.
Posted by Elizabeth Barsham at 11:19 PM No comments:

First day on the job

Hard to believe I’ve only been here a day and a half – busy, busy, busy! So many new sights, sounds and people packed into such a short time. 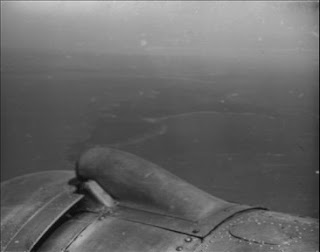 Nice, uneventful flight, which is just the way we like them. I tried very hard to reproduce Dad’s photo of flying-in-to-the-island, but the clouds weren’t right, nor was our flight path and I was sitting on the wrong side of the plane, anyway. Oh well. But I did get a photo of the engine, and the rainbow was nice! 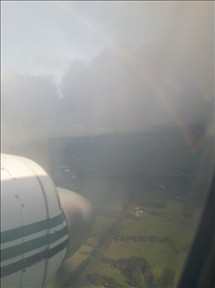 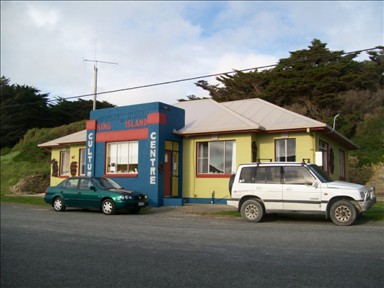 I am now comfortably ensconced in the King Island Cultural Centre, which was formerly the Marine Board Building, right on the harbour. Only a couple of hundred metres from the town centre, but feels as if it’s miles away. Isolation? I love it! 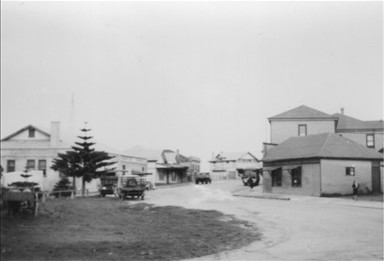 Here is the town centre – in 1947 (approx.) and today. The trees are still there, and some of the grass, and the building just to the right of the trees in the old photo. It’s now the local IGA supermarket. The double-storey building on the right was the pub; it burned down and has been replaced. The little building on the right has had a new roof and a coat of purple paint and is now an art and craft gallery. There doesn’t seem to be much else left. 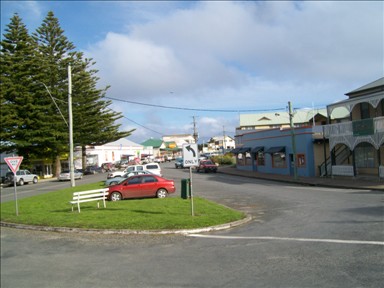 After an hilarious evening dining with Sally and friends in Grassy last night I had no trouble at all getting to sleep, lulled by the waves on the beach and all that romantic stuff. This was what it looked like this evening. 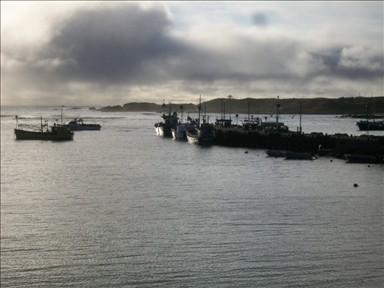 Posted by Elizabeth Barsham at 11:01 PM No comments:

Off to the Island 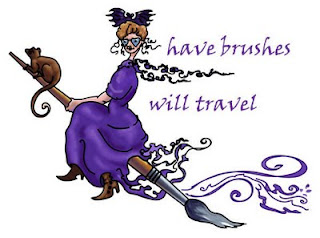 Woohoo! Bags are packed - oil paints: check. Sketchbooks: check. Pastels: check. Pencils: check. And so on, through various other items of artistic paraphernalia. SLR camera: check. All appropriate leads and lenses: check. Cheap digital camera: check. Ditto bits. Battery charger and spare batteries. Audio recorder. Emergency coffee ration. This took most of the day. Throw miscellaneous items of clothing into another bag. This took five minutes. Print out last-minute vital pieces of information. Check emails - oh no! Forgot to arrange transport from airport to Currie, which does not have any public transport, let alone a taxi service, and it's almost midnight and the plane leaves at 0700 and . . .
So begins a two-week Arts Tasmania Cultural Residency on King Island. Keep watching this space.
Posted by Elizabeth Barsham at 9:55 PM 1 comment: