Cats, Books, the Governor's Lady and Argument over a Subdivision

My mother's cat woke me, as cats do, this morning. It had been sleeping on the end of my bed and left a generous layering of ginger cat-hair on my black dressing gown. I think it is trying to move into our house and 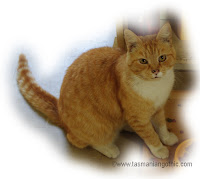 sometimes I begin to think it's a bit of a nuisance. I don't need a cat. And, right at the moment, I don't need any more books, either.

But Bertie got me out of bed early enough to frock up and go off to Lenah Valley to attend the launch of  The Adventures of Jane Franklin, A Victorian Lady Adventurer by Alison Alexander and I came home with another book.

There are some things "everyone knows" about Jane Franklin.

The little museum still stands in Ancanthe Park in Lenah Valley. After the Franklins departed the collection was broken up and lost. The building was used as an apple shed by more practical folk. However, it was eventually rescued, is now the home of the Art Society of Tasmania inc, and the walls are currently covered with delicate botanical illustrations by Kay Chin and her students.

Ancanthe was, of course, the only place to launch a biography of Jane Franklin, and it was most appropriate that a book about a Governor's Lady be introduced by another Governor's Lady – Mrs Frances Underwood, wife of His Excellency The Honourable Peter Underwood AC, Governor of Tasmania.

Mrs Underwood's speech was splendid; she had obviously taken the time to read the book carefully. She had also read one of Alison's earlier books – Governors' Ladies, which she said she had found most useful . . .  If you want to read the full speech, the helpful people at Government House have it up on their website, but you will miss Mrs Underwood's lively, informed and amusing delivery.
You can see some much better photos than the one I took, here.

It is obvious there is a great deal more to know about Jane Franklin and no doubt many of the things "everyone knows" are not at all what really happened. Alison Alexander is a meticulous historian and a very good writer, and I can thoroughly recommend any of her books; I have several.

Although the suburbs now encroach on Ancanthe, it still appears to be surrounded by bushland, with the mountain as a backdrop just as Jane Franklin intended. 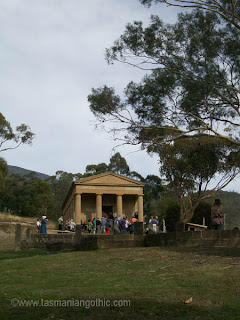 But for how long? Inevitably, there are plans to subdivide the land behind it. Just as inevitably, there is a very active group opposing any development at the site. You can find out more about the argument at http://tasmaniantimes.com/index.php/article/saving-ancanthe or you can join the group on Facebook. 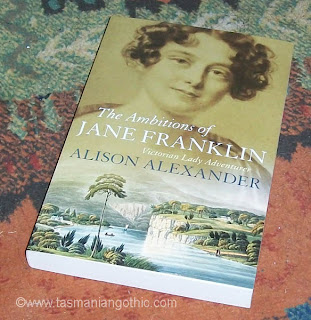 Meanwhile, I'm off to curl up in bed with my new book. The cat has been firmly shut outside.

Posted by Elizabeth Barsham at 9:54 PM No comments: 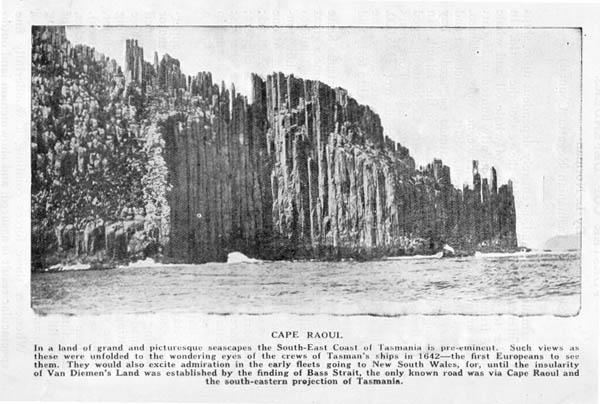 This is Cape Raoul. Some time about the turn of the last century. It's probably one of Tasmania's most photographed bits of coastline; not hard to see why! This is a much-reproduced Beattie photograph and this particular copy with caption appears in Tasmania's Strange Story, "issued under the Auspices of the Come to Tasmania Organisation by Leslie Norman, Sec." in 1928 "to attract a greater number of tourists for the season".

The photograph above is a typical view of Cape Raoul's unmistakable dolerite columns. Dolerite, according to J.R. Skemp, my favourite authority on things Tasmanian, formed from molten magma, which intruded into sedimentary sandstones in the Jurassic era.
"The cooling of the dolerite sometimes made it split into vertical sections which were exposed in lifted blocks, and produced what is called 'columnar' dolerite. Good examples of this columnar dolerite are the Organ Pipes on Mt Wellington, Cape Raoul on Tasman peninsula and the sides of the Cataract Gorge, Launceston." . . . he goes on to point out that it is this dolerite that makes the "Tasmanian landscape so different from that of the rest of Australia and give[s] it an added attraction for tourists. The nearest similar dolerite rocks are in South Africa and Antarctica."

No doubt you have seen plenty of photographs of yachts "rounding the Raoul". But have you ever wondered what it looks like from the top? Or what you can see from there? Here are some photographs I took when out with the Hobart Walking Club last year. They are presented here in the sequence they were taken, so should give you a bit of an idea of the way the vegetation and terrain change as you near the point.

In the early days of settlement some of the English had little respect for the landscape. In the nineteenth century the crew of a Royal Navy ship amused themselves using the columns of Cape Raoul for target practice; they did a bit of damage before people objected. 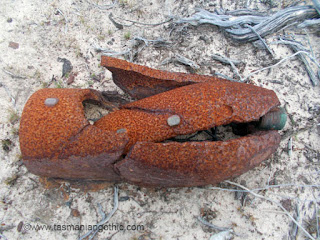 The incident caused such indignation that the only newspaper report I have found so far is an obscure reference to "that event" several years previously. The writer assumes everybody knew what he was talking about. I'm still trying to discover the name of the ship involved!

If you compare the Beattie photo above with a more recent one you'll see a few more columns.

Fortunately, not all their shots hit the target.

In the 1990s a Hobart Walking Club member discovered an unexploded shell further along the coast; military people blew it up to make it safe, but it's still there if you know where to look.

Some of these photographs are on my desktop at present; I get vertigo every time I switch on my computer.

The archaeological dig in my parents' house continues, and more forgotten souvenirs are coming to light.
In 1950 the family left King Island and went to England, where my father worked for two years before bringing us all back to Hobart to live. It was easy to see why they had kept this particular copy of this particular magazine. No better way to introduce it, than by quoting the first paragraph on the first page:

This is the second issue of Volume VII of AUSTRALIA – a monthly review published by the Australian News and Information Bureau, Australia House, Strand, London, W.C.2. Its aim is to present factual accounts of life and affairs in Australia. Any of the material in the Review may be used with or without acknowledgement.

Wonderful – I don't even have to worry about copyright! This issue is dated May-June 1951 and here is the centre spread:

And here is a closer look at the images, with the original captions:


(sorry about the Great Staple in the Sky, but it IS a centrefold, after all)

A recent visitor to England tells me Australia House is not nearly so friendly and inviting these days; in the 1950s it was quite different as our government applied itself to encouraging Englishmen to emigrate to the colonies.
Posted by Elizabeth Barsham at 6:46 PM No comments: