A week in the ACT - Gibraltar Peak

Every Wednesday three of the ACT walking clubs have a combined walk; this week two Hobart Walking Club members went along as well.

The walk co-ordinator signs the book at Dalsetta car park in Tidbinbilla Nature Reserve before we set out on a walk up the fire trail to Gibraltar Peak. 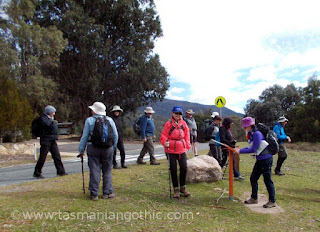 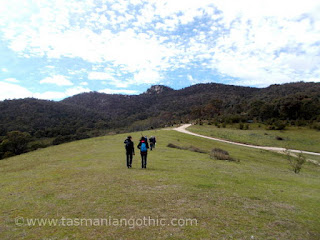 A bike path leads some of the way upward before we reach a steep fire trail. That's Gibraltar Peak there, right in the middle of the photo.

We made a detour to Wallaby Rocks. There is no signpost, so you have to know where you're going. These rocks were used as shelters by the Ngunnawal people, and have special significance. A discreet notice by the first overhang welcomes visitors, and asks that we respect the site. 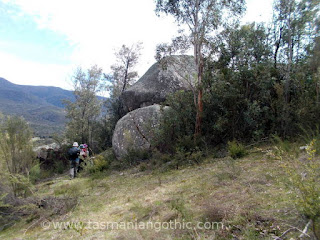 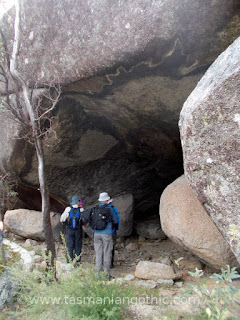 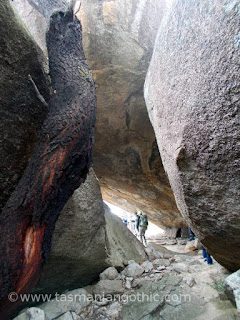 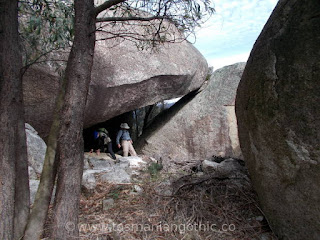 Suitably impressed, we trudged up to the top of the hill. There we rested for morning tea, with a nice view of the Brindabellas, before picking our way down a steep gravelly slope to the foot of the path up to Gibraltar Rocks. 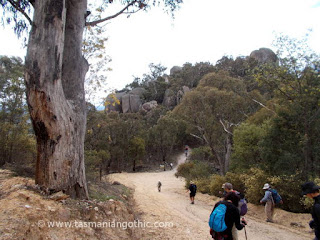 At the beginning of the path a sign informs us that
Gibraltar Rocks is revered by Ngunnawal people as a sacred men's site – a place of teaching for the initiated and a site of cultural lore  . . .  Campfires would have been lit at Gibraltar Rocks to send a message to people entering Ngunnawal Country that the senior men were in residence and the teaching or lore was taking place.

In 2012 a new track to Gibraltar Peak was opened. It includes these nice granite steps that lead you all the way up. 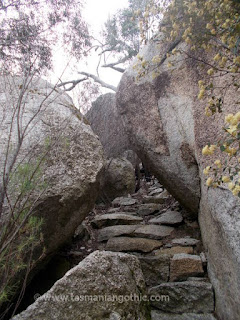 There appears to have been some burning-off done in patches here and there. We encountered several burnt areas 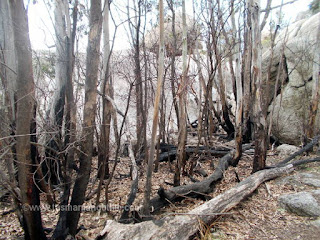 Rocks explored and views admired, we descended by the new walking track. First we encountered this neat viewing platform. 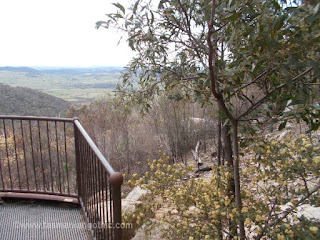 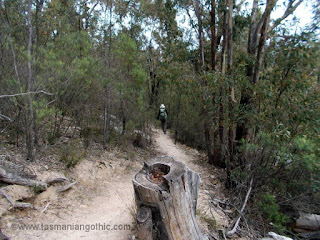 After a lunch-stop at the Mt Eliza saddle, where there is a nice circular picnic table, we had a short downhill walk into cleared land and back to our cars. 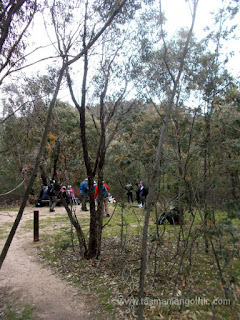 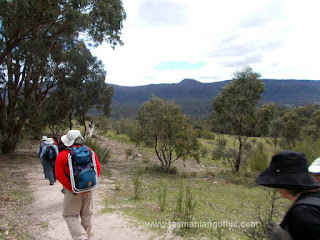 A week in the ACT - Orroral Valley Heritage Walk

Earlier this year a group of bushwalkers from Canberra visited Hobart and joined members of the Hobart Walking Club for various strolls among our mountains and forests. They are returning the favour, hosting a group of Hobart Walking Club members in Canberra. Today was my first outing, and it was a splendid treat – we were escorted by Matthew Higgins, a historian who writes and lectures about the history and ecology of the high country. 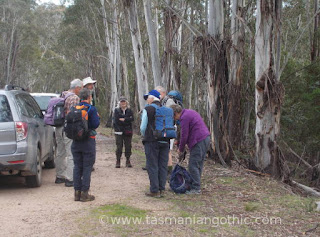 Eleven of us turned up, despite the unpromising weather forecast. So unpromising, in fact, that Matthew had abandoned the planned walk and substituted a shorter, not so distant, one in hope of finishing before the weather broke. We headed for Namadgi National Park. 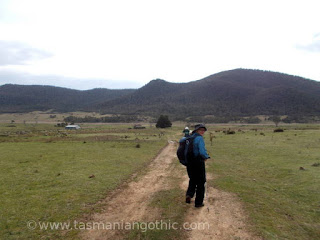 Here we are setting out on the Orroral Valley Heritage Walk, extending about six kilometres from an 1880s homestead to the site of a satellite tracking station, disbanded in the 1980s. 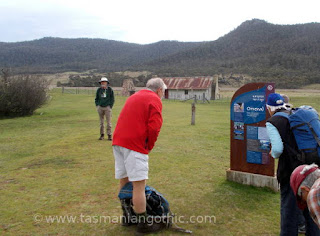 There are plenty of information panels set up at points of interest along the walk. 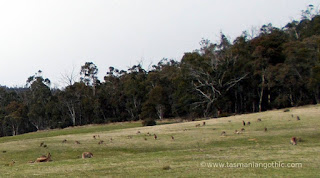 We were intrigued by the mobs of grey kangaroo, many with joeys in the pouch, grazing where farmers once ran cattle. 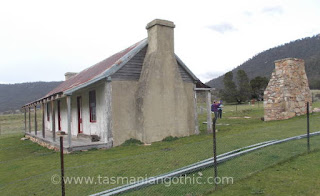 First stop was the Orroral Homestead, dating from the 1880s when it was built by the McKeahnie family. This vertical slab homestead is Namadgi's oldest building. The "weather" end of the house, has been given a coat of cement render.

The chimney is all that remains today of the original kitchen, a separate building.

Further down the valley we came to the site of the Orroral Tracking Station, once one of the largest tracking stations outside of the USA and the largest in the southern hemisphere. This tracking station was one of three – the others being Tidbinbilla, covering deep space, and Honeysuckle Creek ("The Dish") which covered manned missions including Gemini and the Apollo moon landing.

Orroral Valley covered near space – weather, communications and so on. As technology advanced and scientific interests changed, Honeysuckle Creek and Orroral Valley were decommissioned. Only Tidbinbilla is left now. 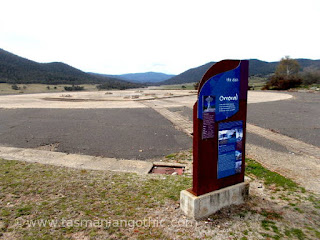 The Orroral Valley telescope went to Tasmania. You can see it, still operating, at Mt Pleasant, near Richmond. This is where it used to stand. 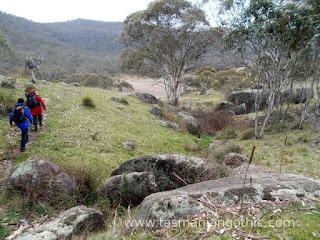 The weather, although gloomy and threatening, still held up so we continued our walk along the valley, visiting other remnants of the tracking station and some spectacular granite boulders before Matthew decided it was time to turn back. 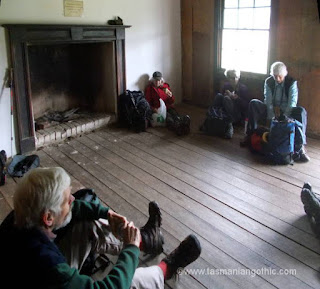 We regained Orroral homestead just as the wind gusts strengthened and it began to rain. Lack of furniture didn't worry us – it was time for lunch. Then we came back to Canberra, via the Namadgi Visitors Centre.

It might not have been the intended walk, but it was an extremely interesting trip, made even better by Matthew's commentary. And we managed not to get very wet at all. An auspicious and promising start to the week!

Posted by Elizabeth Barsham at 11:56 PM No comments: