Three small boys are discussing the colours in a large stencilled and sprayed painting, taking turns photographing each other in front of it. They have been out with the spray cans themselves and one still has a paper mask hanging round his neck. We are surrounded by huge, spray-painted images by graffiti artists Aedan Howlett, Hiiragi, Jacob Leary, Jamin, Phibs and Tom O'Hearn, but we are not in an alley between grimy concrete walls. We are in the super-respectable tastefully restored Barn at Rosny where the artists have spent the last week creating six mural-sized paintings for StArt, the Clarence City Council's annual Festival of Street Art. 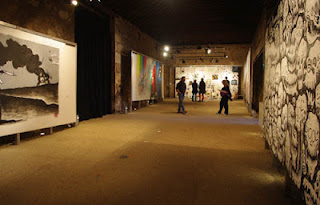 Outside in the sunshine there is a free barbecue, face painting and live music; visitors make badges, stencil designs on calico shopping bags and try their hand at spray-painting and reverse graffiti (drawing into the grime on detatched car doors).

A group of Yarn Bombers helps children make big, colourful pompoms, hanging the results from the bare branches of a winter tree. With Council support the guerilla knitters were able to afford far more, and more colourful, wools than usual, and handrails and bollards along the street sport eye-catching stripes. 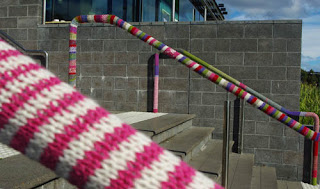 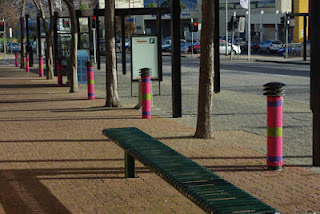 Designs by three digital artists have been printed up billboard size and mounted on the walls of the shopping centre. School children's drawings and paintings compete with commercial displays in shop windows.

On Monday it will all be gone; the only artwork to distract shoppers and commuters will be the usual advertising signs.

The Clarence City Council runs an art gallery and arranges cultural events at the Rosny Historical Site, holds an annual art exhibition, organises various music festivals, and deserves applause for these activities. But far from encouraging and celebrating Street Art, the StArt Festival is devoted to removing all but authorised art from the streets. Notices inform us of the thousands of dollars the Clarence Council has to waste each year on graffiti removal, suggesting it could be better spent on events such as this. Well, hear hear, say I.

How about funding for public art? I don't mean the sort of "art projects" attempting to "beautify" public toilet blocks and similar terminally ugly constructions, which are hardly a compliment for the artists involved.


Anyone practising their art anywhere else in public soon sees it scrubbed out but what if, instead of spending all these thousands of dollars a year on removing graffiti the Council spent a lesser amount on rewarding street artists who created something really interesting?

Why is our society so afraid of Art we lock it away out of sight in museums and galleries and theatres and concert halls, only letting it out for occasional festivals and under strictly controlled conditions?

Why not turn all those bland cream and grey walls around Rosny shopping centre into a blaze of colour that advertises nothing more than enthusiasm and energy? Print up the digital art on  permanent sheeting; leave the yarn on handrails to weather away as nature intends. Let's have some fun!

The painting the three small boys admire so much features the latest symbol of Free Expression vs Official Oppression – three balaclava-covered female faces. Ironic that this image rouses so much interest at an event devoted to teaching children to become respectable, conforming members of a society where Art and Self Expression are restricted to consenting adults, hidden safely behind closed doors.


I wrote this review for Write Response (http://www.writeresponse.blogspot.com.au/), who didn't need quite so many photographs. After I wrote it, I decided to see how our really boring shopping area could be improved. Here are the results. It's a pretty rough Photoshop job, but it was fun. I know which versions I prefer.

Posted by Elizabeth Barsham at 2:05 AM No comments:

House hunting? Here it is - a wonderful houseboat complete with four rooms, a blue light in case of emergencies, food hut, TV with all the stations and a free phone. It's moored on a beautiful site where the water is always still and it will only cost you $4,000 (ono).


Ever wished you might see something like this in the window of your local Real Estate agency? Today I did see this very notice beside advertisements for many, many more equally delightful and attractive residences with robot servants, chocolate-filled swimming pools, secret rooms, pet flaps in every door, unicorns, cupcakes and zombies to choose from as standard fittings.


Alas, it had to be too good to be true.

As part of StArt, the Clarence Council's annual Festival of Street Art, three realtors handed their windows over to primary school children to showcase their dream homes. They printed up notices with the "vendor" description below an image of the property and displayed them very seriously in place of their usual Sunny Acres and First Home Buyers' Specials. 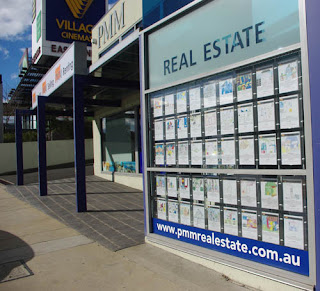 These are only a few of dozens of gorgeous Dream Homes advertised in Bligh Street at Rosny Park this weekend. It's worth dropping down for a look before everthing reverts to Mundane on Monday morning.

There really should be more of this sort of thing.
Posted by Elizabeth Barsham at 7:23 PM No comments: