It had to be done. Time to walk down to the power station. After all, that is the reason all this is here.


When work began on the power scheme, access to Tarraleah was via the Victoria Valley road, then down the Fourteen Mile; the more direct route from Ouse was not constructed until the mid-1940s. Here is some of the road construction. It's not quite a vertical drop from the road, but it's pretty steep. 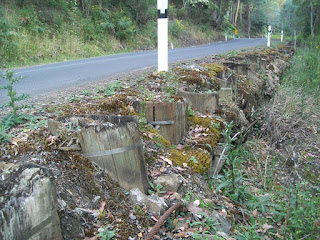 Walking down the Lyell Highway might not sound like a lot of fun, but it really is a very lovely stretch of highway, with plenty to look at. We particularly like the way tree roots have been exposed in the cuttings. 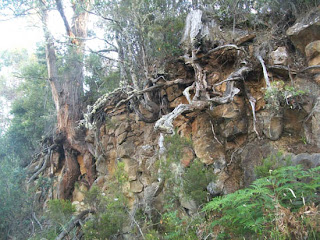 And, of course, we found a Dead Thing On The Roadside. 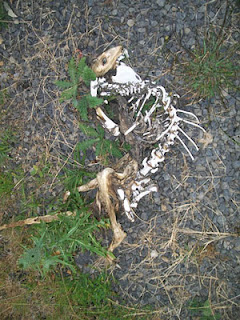 POWER
Where else do children recite the names of power stations? When I was at primary school we were taught to chant: Waddamana Tarraleah Tungatinah Wayatina Liapoota Catagunya.  If the rest of this reads like a school project that may well be why.

“From the heights above, or from the road below, the visitor may see at a glance two major hydro-electric power stations with a total capacity of 300,000 horsepower, situated one on each bank of the river and drawing their supplies of water from separate and distinct catchment areas.” This was written by R.M.H. Garvie, B.Sc., M.I.C.E., M.I.E. Aust, Assistant to the Commissioner, who compiled (sic) a million horses – Tasmania's Power In The Mountains published in October 1962 by The Hydro-Electric Commission, Tasmania. And here they are.


Tunnels, pipelines and concrete-lined canals carry water from Butlers Gorge to the crest above the River Nive; from there six steel penstocks drop 290 metres to the Tarraleah power station on the river bank below.

Lew Reynolds, deputy Power Station Superintendent at Tarraleah told Jim Marwood in the mid-1980s, “There's three kilometres of water in each penstock running down towards us with the mass of a freight train and no brakes. Then it goes over the edge and another thousand feet into the gorge before it hits the turbines. It adds up to a lot of power.” Ninety eight percent of that power is converted to electricity.

The Tarraleah Power Scheme was approved by the State Government in 1934 and took twenty five years to complete. It includes Clark Dam, forming Lake King William, and the Butlers' George power station at its base, which is the first of eight power stations the water passes before it finally flows down the Derwent and out into Storm Bay. The Tarraleah power station began operation in 1938, but work on the Clark Dam was delayed by lack of manpower and resources during the Second World War.

As soon as the war ended the Hydro began recruiting Europeans to work on the scheme, and in one twelve-month period a thousand Polish ex-servicemen arrived. Many were still in the army, still in uniform, and they were not demobilised until after they arrived at their new jobs in Tasmania.

Prior to the War there were nine camps of single men strung out between Lake St Clair and Tarraleah. Only at Butlers Gorge and Tarraleah was there any provision for married men and their families. There was practically no mechanisation; only the odd  traction engine for heavy haulage, accommodation was mostly in tents, with a few huts, work was hard and life was pretty grim. Over the course of the project all this changed completely, and by the 1950s there was heavy machinery everywhere, pick-and-shovel men were becoming an endangered species, and properly planned townships with houses, shops and other amenities replaced the makeshift camps.

When Tungatinah opened in 1955 it was the biggest power station in Tasmania, with vertical shaft Francis reaction type turbines which made a more efficient use of the available space than the older horizontal shaft Pelton turbines in the Tarraleah station. It takes its water from the Pine Tier Lagoon and Nive River via the Bronte Canal, and from the upper Ouse via Monpeelyata Canal and Lake Echo, thence to Brady's Lake via Dee Lagoon.

So now you know. If that's not enough, here is a link to the Hydro website:
http://www.hydro.com.au/energy/our-power-stations/derwent

Posted by Elizabeth Barsham at 4:38 AM No comments:

WEEK TWO AT TARRALEAH
The second week at Tarraleah has been very productive. It's amazing how much painting one can get done by working regular hours - my hours have been anything but regular, but there have been a lot of them. Just to tease you, here are four stages of the corner of the painting that's been keeping me up quite late at night. It still has unresolved problems, so it came home to my studio today and can stay there until I work out how to fix it.

Sometimes a tourist has wandered in; here's one of them. This is the gallery space in the reception area. 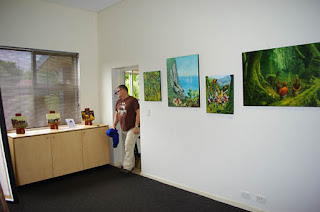 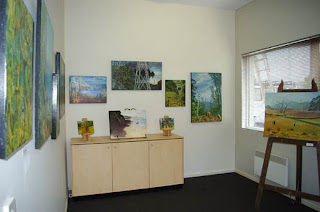 Despite working till midnight some evenings, I did have time to go for a walk along about a kilometre of Lyell Highway one evening with great success. We found some elegant wallaby jawbones and another very heavy jaw I guess belongs to a wombat. Feel free to correct me if I am wrong. 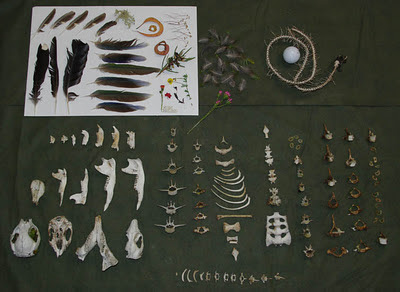 There were plenty of vertebrae, including a sacrum, lots of ribs, phalanges and so on. Many tiny pieces of small animals, like the delicate discs between vertebrae. 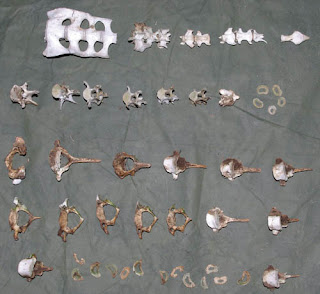 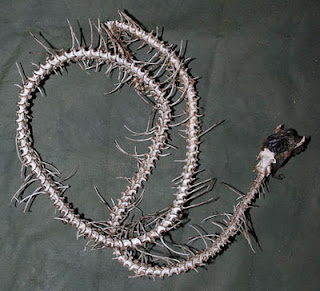 We were particularly pleased with the snake. It is destined to become a necklace, with the vertebrae threaded on fine wire. Tourists may have been a mite concerned seeing the Café Supervisor strolling home with this lot.

We had intended heading for the pub for our evening tipple, but it closed before we finished rearranging and photographing our treasures. So we watched DVDs instead. I never have time to do this at home, so I am really enjoying catching up with some of the many vampire movies I have missed.


FIRST FOUR DAYS ON THE JOB AT TARRALEAH


Everybody has been very nice to me; they have given me everything I asked for (photocopying, signage, furniture, light globes, a saucepan . . . ) and the spaces I have been allocated are better than I anticipated. There is a nice little gallery space at Reception, and another adjoining my studio, which has plenty of air, light and space. This is what it looks like. 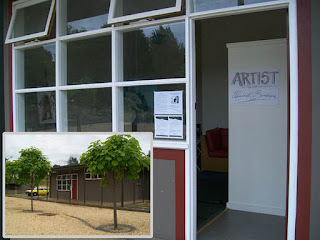 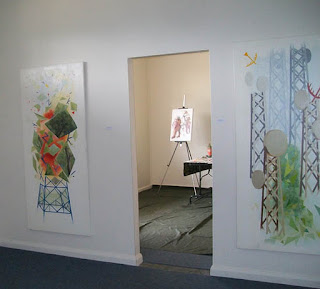 I've already completed two partly-finished paintings and am well under way with a new one. There is no mobile phone coverage here, television reception is hopeless, and even internet connections, supposing I had access to a computer, are patchy. All there is to do is paint, and talk to the odd tourist who wanders in.  So far the tourists have been gratifyingly well-behaved - they have praised my paintings effusively, interpreted them correctly, demanded to see more, and gone off clutching the brochures I have thoughtfully provided.

As if all that isn't enough, I've made a new friend. We while away our evenings photographing road-kill, getting excited about the architecture of spider nests and lichens and investigating the interiors of rotting logs together before retiring to the pub for a convivial G&T. 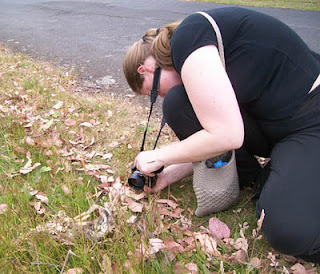 Is life supposed to be this much fun?

These are some of the things we found on a short walk to the waterfall on Saturday night. 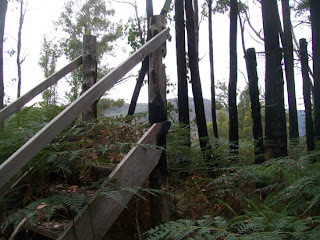 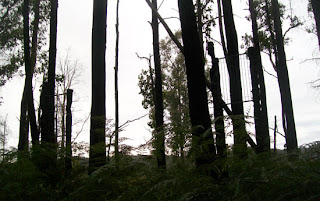 Posted by Elizabeth Barsham at 8:43 PM No comments: