This is the second of a series of photographs of "Tasmanian Gothic" things I've found around the place.You don't have to agree with my opinion about what is, or is not, Tasmanian Gothic. If you really don't agree, start a discussion on my Tasmanian Gothic Facebook Page - and post your own photos. 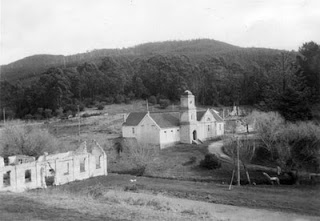 Tasmania was an unsatisfactory place to grow up for an aspiring Goth steeped in English novels. It was all farms and orchards and hydro-electricty, harmless marsupials, sunshine and beaches. Even The Mountain (Mt Wellington, for those not born in Hobart) was rounded and grey and over-familiar. There were no ruined abbeys, mediaeval dungeons or mysterious stone circles; no craggy alps and no melancholy winters with wolves howling in snow-deep forests. No romantic gloom at all. Just Port Arthur.

We spent the school holidays at Port Arthur, climbed on the ruins and learned to spell “penitentiary” from the prim signboards showing us what the buildings looked like a hundred years ago. In the 1920s it became a film set, buildings re-roofed and patched with canvas for the shooting of For the Term of His Natural Life. Dad bought us dixies of vanilla icecream from the kiosk and we looked at black-and-white stills from the movie, fading and crooked in a display window outside. The actors were as remote as the convicts that preceded them, but a lot prettier. It was a nice holiday, but it wasn't Gothic.

I went away, visited Europe's ruined abbeys, mediaeval dungeons and craggy alps and saw a wolf somewhere in a zoo. I read and studied and did things and eventually returned to Tasmania. Now I can recognise the strangeness and isolation of our mountains and lakes and forests, background to so many idiosyncratic and outlandish characters and events. It's Gothic all over!

Well – except for Port Arthur.

The trouble with Port Arthur is we know too much about it. Today it is beautifully maintained with tasteful restorations, tranquil gardens, informative educational displays and a fine restaurant. Diligent visitors can immerse themselves in the story of a convict-of-their-choice and read first-hand accounts of sea-voyages, hardships, punishments and all the rest. They can visit the high-tech genealogy centre in the former lunatic asylum (which later became the Council Chambers and is now a museum and coffee shop. Make of this what you will) to find out whether any of their ancestors appear on the lists. And there are lists – interminable lists of names and misdemeanours, punishments and appointments, lists of food allowances, stores, clothing, produce and anything else of administrative importance. This is bureaucracy. There is no room for imagination. It's magnificent, but it's not Gothic.

Remains of administration building at Saltwater River, on the Tasman Peninsula 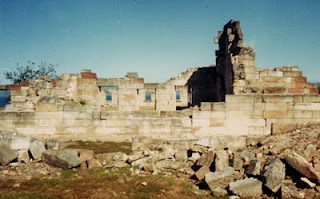 For Gothic I recommend the old coalmines site at Saltwater River. Remote, less visited, its past has not disappeared under layers of subsequent cultural baggage.

Posted by Elizabeth Barsham at 1:15 PM No comments: