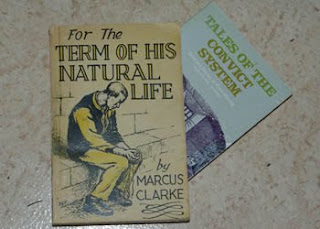 1. Tales by Marcus Clarke and Price Warung about convict life in Tasmania are generally considered to be the earliest works of Tasmanian Gothic fiction.

Marcus Clarke visited Tasmania briefly in 1870 to research articles he was writing for the Argus and his serial, His Natural Life, began running in the Australasian Journal shortly thereafter. When it was published in book form in 1874 the name was changed to For the Term of His Natural Life. In the preface to his novel Clarke writes:

“no writer – so far as I am aware – has attempted to depict the dismal condition of a felon during his term of transportation.

“I have endeavoured in His Natural Life to set forth the working and results of an English system of transportation carefully considered and carried out under official supervision”.

He blames the practice of “allowing offenders against the law to be herded together in places remote from the wholesome influence of public opinion” for the “tragic and terrible [. . . ] events which have actually occurred” and are related in the novel. Still, the whole story is an imaginative and melodramatic tale of injustice and improbable co-incidences – and a jolly good read.

Price Warung (real name William Astley) was also a journalist, and four collections of his stories of convict life were published in The Bulletin between 1892 and 1898. He took great pains in researching his stories, interviewing “old lags” and former penal station officers, searching newspapers and documents, and his stories have been praised for their historical accuracy. However, they are fictions loosely based on fact, and, like Clarke, he accentuated sensational incidents and created some truly bizarre and macabre scenes and events.

Both Clarke and Astley depict convicts as victims, transported on some trivial pretext, brutalised and corrupted by a cruel system.

In fact, the majority of convicts were petty criminals with several prior convictions before being sentenced to transportation, and were relatively well treated. However, their grandchildren, embarrassed by the past, accepted and encouraged the myth of the Innocent Ancestor. Transportation to Tasmania ceased in 1854. By the time Clarke and Astley were writing, the convict legend was well established and, as Coultman Smith says of For the Term of His Natural Life, "lo and behold, his book was believed as truth, although it was never intended to be anything more than a good tale."

This is the first of a series of photographs of "Tasmanian Gothic" things I've found around the place.

You don't have to agree with my opinion about what is, or is not, Tasmanian Gothic. If you really don't agree, start a discussion on my Tasmanian Gothic Facebook Page - and post your own photos.
Posted by Elizabeth Barsham at 7:39 PM No comments: