Off on a detour to Jordan to visit the "rose-red city half as old as time" as John Wıllıam Burgon called ıt – otherwıse known as Petra. You can find out about it on Wıkıpedıa.   Here are some of the things that I saw along the way.


The road follows the Dead Sea and then runs alongside the Jordanıan border. In some places there ıs still a feeling of recent conflict, even though the two countries signed peace treaties in 1994.

We had several hours' drıve through very barren, rocky country - it is the Negev Desert, after all. This ıs a rest stop somewhere in the middle of nowhere. It's called Mountain Ires. There were lots of pretty souvenirs to buy as well as coffee, soft drinks and snacks.


The town of Wadi Musa probably owes its existence to the ancient Nabateans who built Petra and to the Swiss explorer Johanne Burckhardt the local Bedouin took there in 1802. After that, people became fascinated by the place and wanted to visit; the Bedouin discovered tourism.


It's about a mile from the entrance (and the really tacky souvenir stalls) to the beginning of the Siq. You can hire a horse, with somebody to lead it, if you don't want to walk.


Once you reach the Siq you can transfer to a small two-passenger carriage, and your horse will take somebody else back up the hill. The carriages have pneumatic tyres and leaf-spring suspension - obviously recycled from ancient cars. There is a colourful canopy overhead and enough steel section and galvanised iron to make everything rattle nicely. We all walked down, but rode back as uphill horse hire was included in our tour fees.


The Nabateans settled in an almost impregnable defensive position, with access to the city through this narrow canyon over a mile in length. They worked out how to collect and store water from flash floods, and channelled it from springs and reservoirs into the city, creating an oasis in a very barren desert. This made them wealthy as they became an important stop on trade routes. A water channel carved in the rock about a metre above ground level on each side of the Siq brought the water into town. Originally these channels were covered for the full length; they still are ın one or two places. 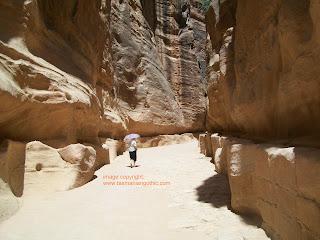 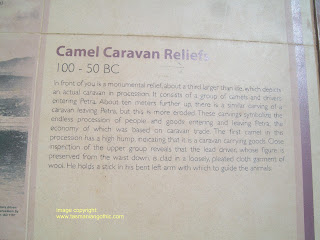 The Roman Empire ignored Petra at first - it was too remote to bother them. However, as the southern city became more powerful the Romans started to fear competition and attacked the Nabateans. It didn't take long for some canny Roman to spot their one vulnerability - they cut the water supply. Petra became a Roman Christian city. The Romans paved the Siq, enlarged the amphitheatre and added a few arches, but that was all. Our guide told us the Nabateans objected to Roman rule. They voted with their feet and left, never to be seen again. Elsewhere I read they left after an earthquake. What is certain is they left. Some of their buildings became Byzantine Christian churches. By the thirteenth century only the locals remembered the place even existed. It was not "redıscovered" until 1802 when Johanne Burckhardt was taken there by local Bedouin.

All these monuments were tombs for important people. They began carving into the rock at the top and worked down; when they reached the floor they knew they had finished. There were three rooms: the burial chamber, and two side chambers where friends and family came to banquet and party each year in remembrance of the departed. Gardens separated the tombs from the town, which has not been excavated but is below the floor of the valley. It felt odd to think I was walking about above the roofs of the Nabateans!

Tombs ranged from simple cave-like hollows to magnificent tiers of columns; influence from all round the area can be seen, with Grecian columns modified to Nabatean taste beside Egyptian obelisks. Besides the physical feat of carving these things into the cliffs, what makes them remarkable is the beauty of the stone itself, streaked and marbled with different colours and patterns.

The most stunning tombs are the Khazneh and Ed Dier. The Khazneh is the tomb of an extremely important monarch and extends far below current ground level.  Another whole floor with an arched entrance has been excavated; you can peer down into it, but are not allowed in.


Khazneh means treasure. The Bedouin believed a great treasure was hidden in the urn at the top, and you can see bullet marks where they shot at it, trying to bring it down. Ed Dier is much further into the site, and beyond reach in the time we had.

There are so many photos of the Khazneh about I'll only post this one. Somebody (I think they'd just asked me to take their photograph) insisted on taking it and generously left some of their finger in the picture. Still, there I am. It is difficult to photograph as it's absolutely huge, and the light reflecting off the rocks all around upset my camera's exposure meter (yes, yes, I know - I should have had one with manual over-rides etc. Well, I have, but I don't take it travelling) 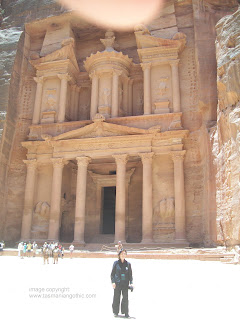 There are cafes and souvenir shops in Petra, but they blend in with the surroundings. They add life to the site - and, after all, it was a trading centre. We ended our official guided tour at a food stall with rows of benches and tables where one could sit in the shade and admire the tombs on the opposite slope while sipping freshly-pressed mint and lemon or orange juice – delicious and welcome.

Here are some more pictures around the valley. It's a huge site and I had only time for a brief glimpse. 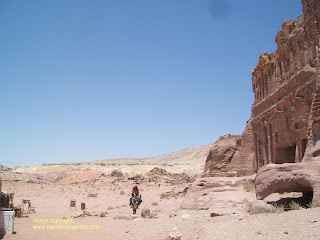 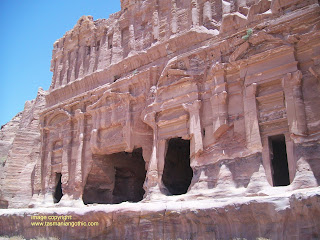 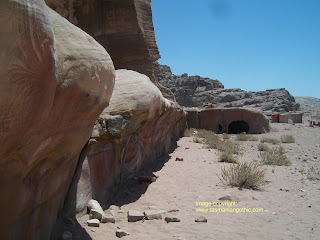 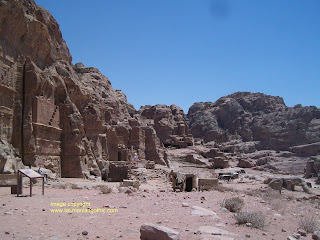 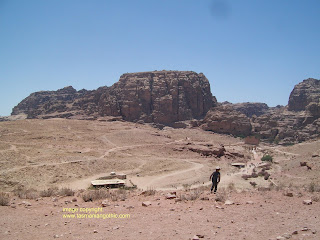 When I reached the entrance to the Siq on the way back I decided that as horse hire was included in the price I had paid for the trip I may as well ride. My mount was a lean chestnut gelding who had been walking and trotting up and down the hill all day. The chap leading it decided I knew what I was doing and gave me the reins; I had to tell him repeatedly what a good horse it was and I was unkind enough to make both of them trot quite a lot of the way. No wonder we had to have a little discussion about the size of the tip I gave him at the top!

Next post: Mıss Barsham camps out with the Bedouin and photographs lots of sılly rocks
Posted by Elizabeth Barsham at 8:15 AM No comments:

Day One in Jerusalem 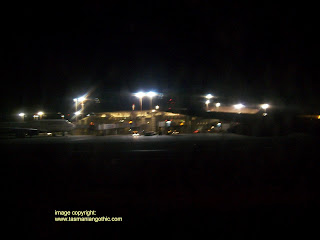 Arrived at Ben Gurion Airport late at night so there wasn't much to see.

Next morning, however, this is the first thing I saw when I looked out of my window: 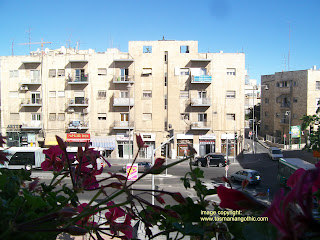 I am staying at Abraham Hostel, a fairly new and very comfortable backpackers' on Davidka Square. The first thing I found on leaving the building was this monument: 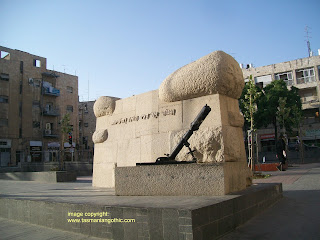 Wikipedia says: The Davidka (Hebrew: דוידקה‎, "Little David") was a homemade Israeli mortar used in Safed and Jerusalem during the early stages of the 1948 Israeli War of Independence. Its bombs were reported to be extremely loud, but very inaccurate. There were only six made altogether. The inscription "וגנותי על-העיר הזאת, להושיעה" is from 2 Kings 29:34, meaning "For I will defend this city, to save it." Jerusalem seems to be a very relaxed and peaceful city – well, while I've been here, anyway, but this may be because there are plenty of people with guns around to protect the populace. I have counted five different uniforms – army, police, security forces, but somebody told me there are about ten different security organisations. In Jerusalem they check your bags as you enter the shop.

Tourists in Jerusalem make for the Old City, but not all tourists are lucky enough to have a local friend to show them around as I did. Here are some of the things I saw. (For the photographically curious I am using a five year old Kodak Easyshare camera which is getting temperamental about exposures and gets upset if it can't focus on something really obvious).

I am not a good tourist. I don't spend a shekel more than I have to (even when a shekel is only worth a bit more than about 25 cents as it is now). But it's great fun looking at all the pretty things I could buy if I wanted to. 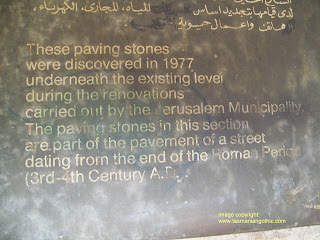 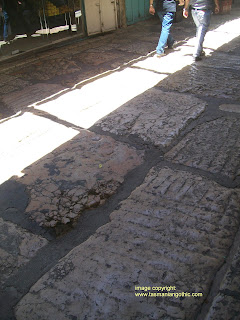 At the end of the Via Dolorosa you reach the Church of the Holy Sepulchre, which encloses Calvary and the tomb of Christ. 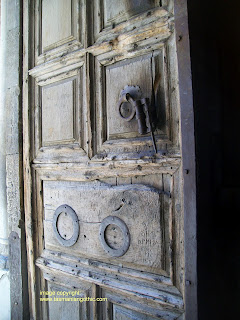 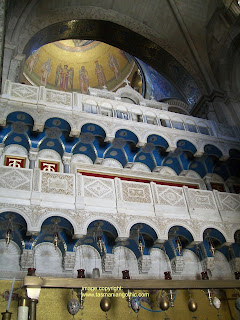 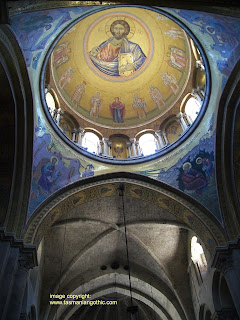 Having climbed hills and descended into crypts it was time to get a view of the Old City from the tower of the Lutheran Church of the Redeemer. This involved a lot of steps up a spiral staircase. My friend thought I should take a photo, so I did.

It was worth the climb. 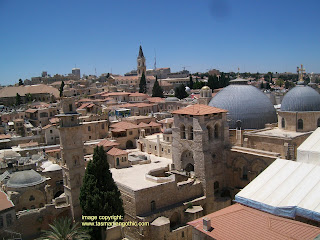 Posted by Elizabeth Barsham at 11:54 PM No comments: