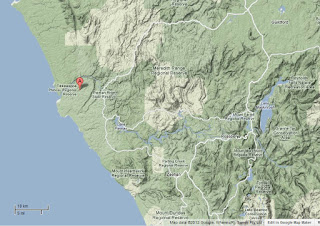 If you look at a map of the West Coast of Tasmania you will find, on a bend of the Pieman River a little south west of Mt Donaldson, the Tikkawoppa Plateau. According to some notes I made in 1990:


The name was originally given “by Forestry Dept workers in 1930”. The Nomenclature Board records also state it was because of the unusually large number of cut staves they used when they surveyed it, which resembled the poles Scouts use . . .

That's all very well, but where does the word come from? And what is the connection between boy scouts and forestry surveys?

The first definite use of the word that I can find is in 1927 when Boy Scouts from all over Australia held a Corroboree at the scouts' camp-site at Dog’s Head, Lake Sorell.

At the end of the camp one troop was given custody of the Tikkawoppa and an hour’s start before the rest of the boys were set loose. The troop with the Tikkawoppa in their possession when they reached Hobart was deemed the winner. They hiked out to Tunbridge where they caught the train to Hobart, but history does not relate who won or what they received as prize, if anything. This activity was repeated in different places on other occasions.

Nobody seems to know precisely what the Tikkawoppa was, but I think it safe to say it was whatever the scoutmaster chose to improvise. Here are some more photographs taken at the 1927 camp at Dog’s Head. 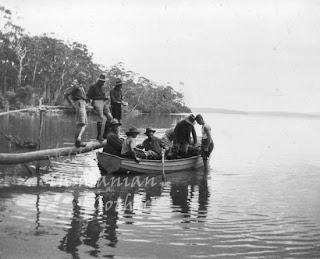 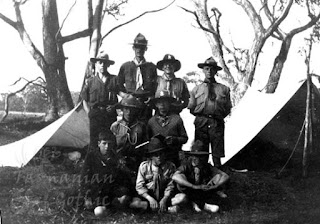 Unfortunately, they show nothing indisputably identifiable as the Tikkawoppa.

In the early twentieth century the first extensive forest surveys were undertaken, and workers camped out for weeks at a time in remote forests. Although the Department boasted its own motor car, called Walzing Matilda, roads were few, tracks were rough, and often the only transport was by packhorse. The surveyors set up substantial camps with big, heavy canvas tents supported on a large number of poles which were cut in the forest around the camp site and they drove in wooden staves all over the forest as survey markers. The denser the forest, the more markers were required.

Apart from tents, the other thing the Boy Scouts and the Forestry Department had in common was Lt Col Denis Lane, who joined the public service on his return from the Great War and was the Forestry Department's first Working Plans Officer. He continued to serve part-time in the Army and was also very active as District Commissioner of Scouts. All together, these activities ensured he could spend the greater part of his life camping out in the bush somewhere drawing maps, his favourite occupation. In January/February 1930 he and a team of bushmen spent two weeks surveying the west coast of Tasmania for the Forestry Department.

But What About the Tikkawoppa?

Denis Lane was born in Christchurch, New Zealand, seventh of twelve children. The Lane family moved to Australia at the end of the nineteenth century and eventually settled in Hobart when he was about seven years old. They were educated, literate people with a keen sense of humour and a love of language and word games. Like many families, they had a collection of nicknames and private words and tikkawoppa was just one of them. They might have made it up; they might have mis-heard or deliberately corrupted an existing word, perhaps of Maori origin. It is impossible to say.
We can be quite certain, however, that it was Denis Lane who introduced tikkawoppa to both the scouts and the Forestry Department as a general term for an otherwise undistinguished object, and it was probably in general use for a while. At least among impressionable young lads and bored bushmen working alongside the Colonel.

An uncle told me the tale of the scouts and the Tikkawoppa when I was asking him about my grandfather, Colonel Lane. It was some time after this that I discovered the Tikkawoppa Plateau on a map of the west coast of Tasmania and contacted the Lands Department to check whether Grandfather had anything to do with it. He had.
Denis named many features on the west coast and in other parts of Tasmania, and some years later the Nomenclature Board named Lanes Peak, near Mt Field, after him in recognition of the work he had done for them.

The picture at the top of this entry is called Tikkawoppa, and I painted it after my uncle told me of the Boy Scouts and the Tikkawoppa. But I still don't really know the origin of the word.

If you're a New Zealander and happen to have come across a similar word somewhere, I'd really like to know!
Posted by Elizabeth Barsham at 10:49 PM No comments: