Weld Echo exhibition opens this Friday evening - 17th February. Apart from supporting the efforts of the Huon Valley Environment Centre, I like doing work for WE as it is an opportunity to experiment with different styles and ideas.

These are the paintings I'm entering this year:

Everybody's into Steampunk these days . . . got a bit bored with this one. Not weird enough. Oh well.  More paintings under way.

This was inspired by a photograph of my grandfather and two other Forestry Dept workers crossing the Weld River near Fletcher's Cabin in 1925 or thereabouts.

Things to Come this month

Is this the year you finally get round to learning to paint? 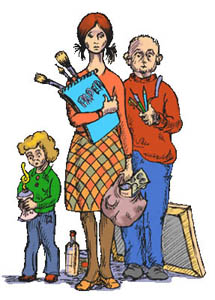 My Tuesday evening drawing/painting classes at Nolan Art in the Salamanca Arts Centre in Hobart are proving so popular I've had to put on another course to handle the demand. So:

Learn to Draw - new course
1000 - 1200 every Saturday at Nolan Art (right opposite the Long Gallery in the Salamanca Arts Centre). Come in and spend a couple of hours drawing then check out the Market, meet friends for lunch, or generally relax. In nice weather, should you desire, we might even do some drawing outdoors - market, historic buildings, fishing boats, gardens - there must be something you'd like to draw!

Adult Education is still alive and well, although reduced in size and labouring under a new name which I refuse to use. The new brochure came out on Feb 4, and enrolments are coming in. Go to my web page for the quickest way to see which courses I'll be teaching - www.tasmanian-gothic.com/lessons/

Posted by Elizabeth Barsham at 1:01 AM No comments:

Email ThisBlogThis!Share to TwitterShare to FacebookShare to Pinterest
Labels: lessons and things

WEEK FIVE AT TARRALEAH
Last week's painting workshop went very well, despite fewer enrolments than we'd hoped. Perhaps the drawing weekend at the beginning of March will attract a few more people. I've packed up and moved back to Hobart, but a selection of paintings remains at Tarraleah for your enjoyment, should you be passing that way.

I liked it so much that I stayed on at Tarraleah for an extra week. And it was well worth while – once more I managed to get into places that are usually not open to the public. And I took lots of photographs.

So – a word of warning: if you're bored with power stations, stop reading now.

This is the foyer of the Tarraleah Power Station. The whole building, including fittings and turbines, is heritage listed.

Two views of the control room. These days the station is monitored from Hobart and this impressive array of dials is no longer used. They have been replaced by the computer in the foreground of the bottom photo, but will remain here as part of the building's history. 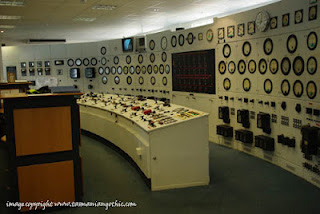 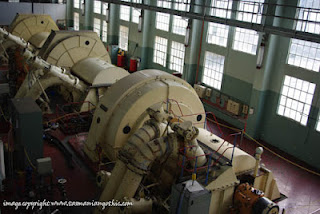 At present the Hydro is undertaking a major overhaul of its facilities; this is what it looks like when they remove the water intakes from a turbine. The white panels top right are sound-proofing as the old Pelton wheel turbines are not insulated and it can get very noisy when they are all running. 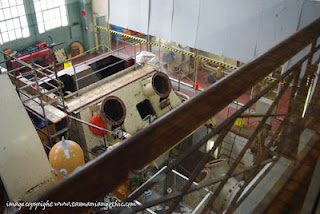 Notice the art deco light fittings. The control room is on the upper level, right.


Once it's gone through the turbines the water is released back into the Nive River. Several power stations later it ends up in your cup of tea. Assuming you live in Hobart.

TUNGATINAH
Tungatinah, just across the road and on the opposite side of the river, was built in the 1950s and uses the more sophisticated vertical shaft Francis turbines. Again, refer to Wikipedia: http://en.wikipedia.org/wiki/Francis_turbine
This is what they look like: 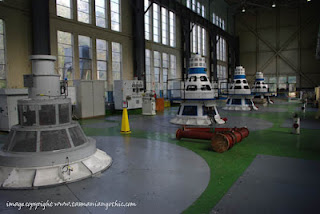 They extend down three floors to the basement, so all you really see here is the pilot exciter. What well-known sci-fi characters do they remind you of?

The turbine in the foreground is a more modern version than the other four. And if you can only see three, that's because the furthermost one is undergoing maintenance. Here it is:


The building houses the main valve at the top of the penstocks; the roof is removed and the crane used to lift the valve out for maintenance. This is all heritage listed, too. 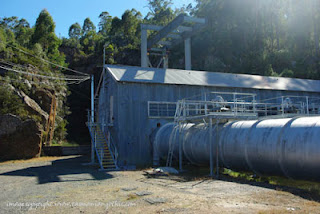 A DIFFERENT  POWER
I stopped at St John the Baptist Anglican Church in Ouse on the way home; here are some of the pictures. 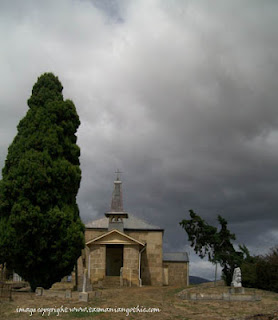 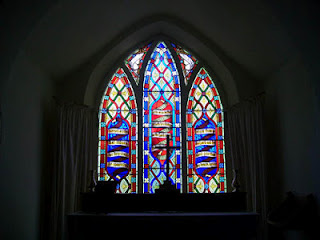 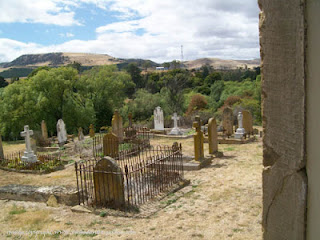 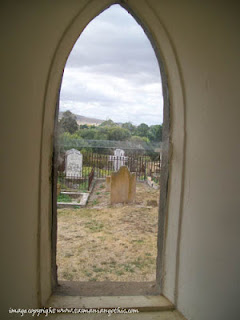 Posted by Elizabeth Barsham at 4:35 AM No comments: 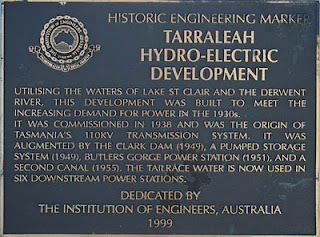 As Artist in Residence I'm officially supposed to be yet another interesting attraction for tourists to look at. So far I seem to have averaged one visit a day, which suits me very well as it's just enough to be diverting but not enough to become an Unwelcome Interruption.

Some of the people who have come in have been comfortably at ease; others plainly bemused. There was the friendly, chatty engineer from Vancouver who was filling in time while her sons were off fishing, and was good company. There was the young couple who were worried one or both of their children might touch something or behave inappropriately, fussed frantically trying to hush them, and finally fled when it all became too terrifying. There was the portly lady taking a break from her Leadership Conference who sat on the couch and asked sensible questions, finally remarking on my sensible shoes. This was an odd non sequitor, but perhaps she had just suffered an Unfortunate Footwear Experience.

And there was the elderly man in shorts and sandals and a terry-towelling hat who wanted to know what style I called that? I said “Tasmanian Gothic” and he nodded wisely. “Gothic Style” he repeated, making sure he remembered it so he could tell his daughter, who Paints. He'd seen traditional painting, which he could understand and he'd seen abstract painting which he couldn't, but my paintings had him stumped. He liked them, but “It's sort of like eggs, scrambled eggs . . . “

What? Intrigued, I asked him to elaborate, but despite his best attempts he couldn't really explain what he was trying to say. I think he was having trouble with recognisable shapes in unexpected juxtapositions; they had to mean something, but he had no idea what and was definitely out of his depth. So he told me all about his family until his wife came looking for him and whisked him away.

I've continued exploring the immediate surrounds of Tarraleah, and have taken a large number of photographs, most of which I will probably never use. The pipeline with its magnificent surge towers continues to fascinate; it does rather dominate the landscape. 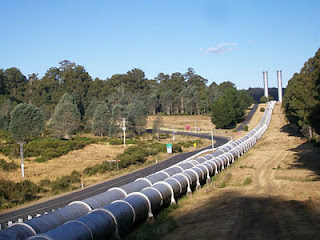 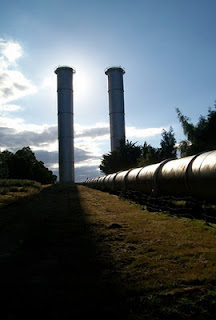 There are traces of Engineering all through the bush, but nature is carrying on undeterred. 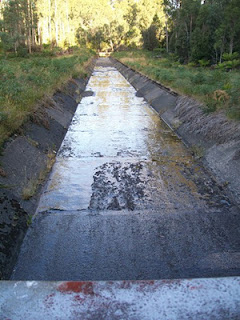 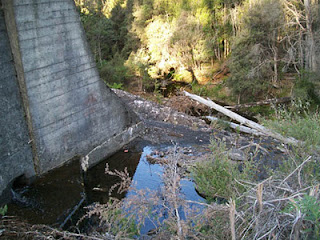 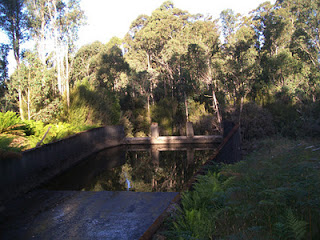 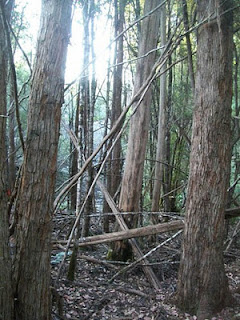 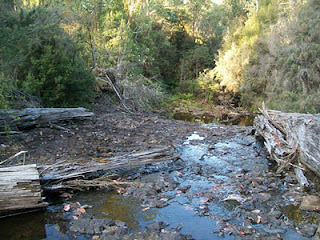 I spent a jolly fifteen minutes or so watching a platypus, and here is the photograph to prove it. 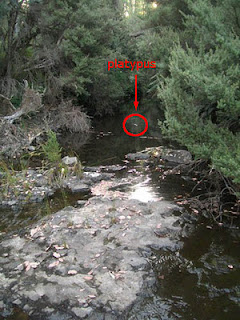 Despite my best efforts, it belongs in the category of worse-than-useless amateur wildlife photographs, but I tried.  It's not my fault the platypus wouldn't co-operate.
Posted by Elizabeth Barsham at 1:28 AM No comments: