Here I am in Berlin, and this is the Pergamon Museum , where you can see many enchanting and amazing objects. 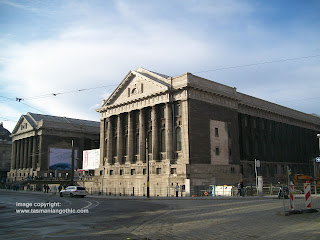 It was built specifically to house this: 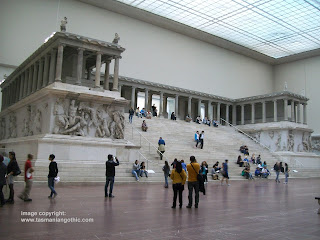 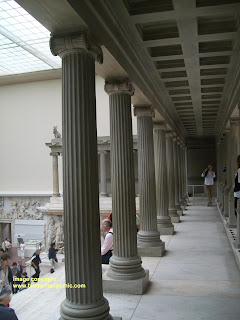 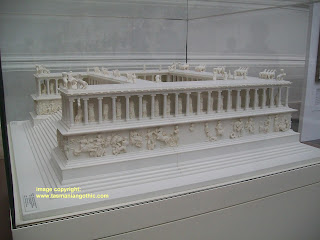 Of course, I’ve been to the museum and seen the Temple before, but this time it was different, because only three weeks ago I was here: 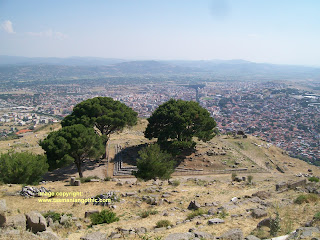 This is Bergama in western Turkey, known for its olive oil, carpets and onyx. And the terraces under the trees are the original foundations where  the Great Altar used to be.

Warning: History. With dates and stuff

Pergamon was a Lydian city until the Persian invasion of 546BCE. After Alexander the Great defeated the Persians it became an important Hellenistic centre of arts, culture and learning with the second biggest library in the empire (after Alexandria), and a magnificent and famous hospital, the Aesclepeus.


When Attalos III died in 133BCE he bequeathed his city and everything to the Romans, who looked after it pretty well. It remained a prominent cultural centre, though with little political importance. As the Roman Empire faded, so did Pergamon and by the Byzantine period its main importance seems to have been as a source of building materials.


As Tasmanians know, if you want some dressed stone it’s a lot easier to help yourself to the remains of an old building than start at the quarry face. This is an ancient recycling practice called spoliation, and archaeologists hate it, especially when it means inscriptions end up broken into pieces and scattered in all the wrong places.


Here is a wall at Pergamon that, when the Romans were there, had an elegant marble facing: 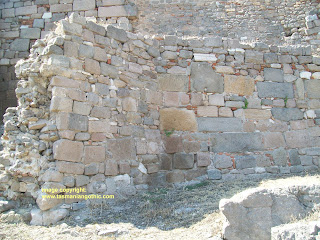 In the years 532 – 537 the emperor Justinian organized the building of a new church in Constantinople, the last two having been destroyed by rioters. He had the marble facing from walls at Pergamon removed and used to decorate his new church. I have absolutely no idea which particular pieces of marble in Hagia Sofia came from Pergamon, but these are jolly impressive. 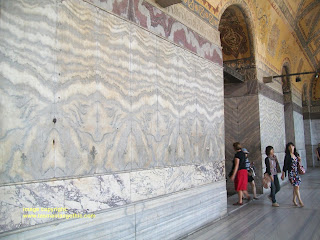 A couple of hundred years later Pergamon was sacked and burned by the Arabs; new fortifications were built using stone from the ancient buildings. There were still a few amazing things left there, however. During the reign of Murad III (1574 – 1595) two great big marble jars, originally from the Hellenistic period, were brought from Pergamon and placed in Hagia Sofia, which was now a mosque. Here’s a rather dark photograph of one of them: 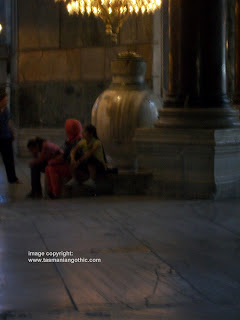 Justinian was determined his new church should be bigger and better than any ever built before, and had materials shipped in from all over the middle east. Columns came from the famous Temple of Diana at Ephesus, one of the Seven Wonders of the World.


Now it might seem a big job shifting a lot of 9-metre-high marble columns, but at least you can take them apart. Wooden, and later lead, pins were used to hold the pieces together.

There isn’t a lot left at the Temple of Diana these days. It’s on the outskirts of the town of Selcuk and has been thoroughly quarried.  So little trace remains it took sixty years to work out where the temple had been; an expedition sponsored by the British Museum finally succeeded in 1869, so that’s where all the good bits have gone.

Archaeologists have pieced together some scraps of different columns just to give us tourists an idea of how high it was. It was pretty big - 450' long by 225' wide and 60 feet high, with more than 127 columns, according to that reliable source, Wikipedia. 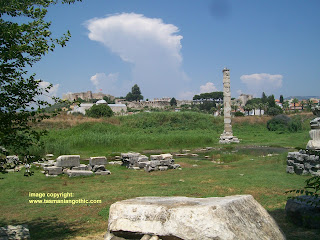 The temple lasted for about six hundred years. It may have been severely damaged by an earthquake and rebuilt, but was finally destroyed by the Goths in 268CE. There must have been plenty of useable stone left lying around, for columns were also used in the Byzantine fort built during the sixth century on Ayasuluk, in the background of this photograph. There’s a Turkish flag flying over the fort.


It seems a little odd to think that structural items from a pagan temple supposedly destroyed by the Christian God (according to the apocryphal Acts of St John) later became the supports of a Greek Orthodox cathedral which itself became a Roman Catholic Cathedral and then a mosque before retiring as a museum. But stranger things have happened.


Justinian gathered up columns from a lot of other places for his building projects. My personal favourite piece of Justinian recycling is the Basilica Cistern in Istanbul. There had been an ancient basilica, probably built by Constantine, next door to the site of Hagia Sophia and Justinian turned the foundations into a cistern to supply water to the palace.


There are at least a hundred ancient cisterns under the city, but this is by far the largest at 140 metres by 70 metres. There are steps leading down to it and walkways have been constructed to take the place of the boats that used to take tourists around. 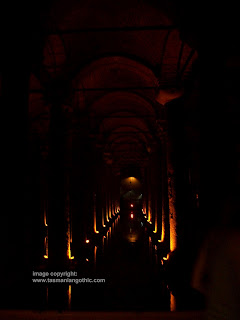 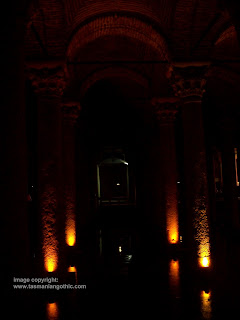 It has a capacity of 80,000 cubic metres, but there are only a few centimetres of water in there now- just enough to reflect the strategically placed lights and turn the whole place into magic. 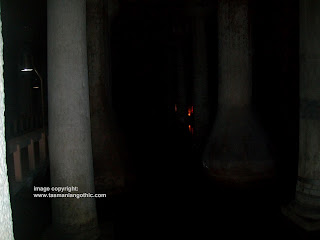 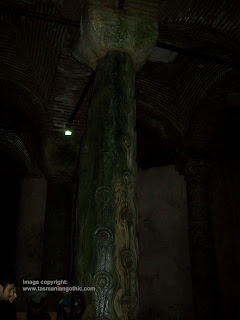 The vaulting is supported on 336 columns each roughly nine metres high. They vary greatly in size and style; about ninety have Corinthian capitals and probably came from the same building. The rest came from other buildings around Constantinople and beyond.

Some weren’t high enough, so had to have bits added. 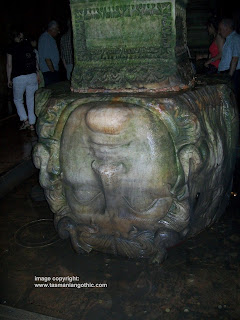 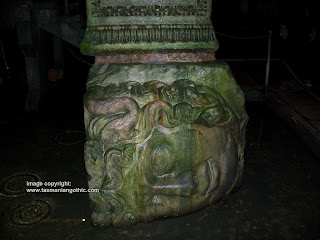 Two of the most notable bits are heads of Medusa, obviously fragments of another building. One had to be turned on its side to provide the right height; the other is upside down. People try to make up stories about why this should be so, but I imagine it’s merely because they worked better that way. And anyway, they would be under water, where nobody would see them.

In Turkish the cistern is called Yerebatan Sarayi – the Sunken Palace.

Posted by Elizabeth Barsham at 10:47 AM