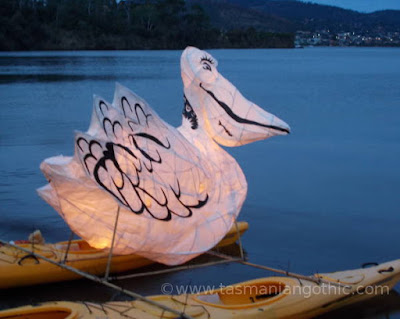 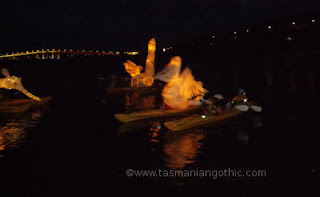 Posted by Elizabeth Barsham at 12:39 AM 2 comments:

Imagine. You are brought to an open field on the edge of an island on the edge of the Southern Ocean. In the centre of the field stand eight rows of black plastic chairs in a cleared rectangle of dark earth but you are not invited to sit. Your group, people you have never met, assembles in a semicircle around the chairs. It is long past midnight. The moon, just past its full, slides behind a dark cloud. You can hear waves breaking on the beach. Nobody speaks. You begin to wait. 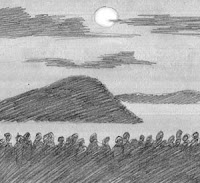 Lights are bobbing across the field, approaching. A chant, distant on the breeze: “One, two, three, four. One, two, three, four.” The voice calling cadence is cracked, the timing irregular. A cloud passes and sudden moonlight reveals a ragged column of people, four abreast, not shuffling, but not marching either; no-one could march to that uneven beat. The crowd parts to let them through and the caller falls silent.

Quietly, people file in to occupy the chairs, and now you see they are old. Senior citizens in their night clothes, dark dressing gowns over regulation striped pyjamas, grey hair escaping from identical black beanies. Grandmothers and grandfathers dragged from their institutional beds to confront the Hour of the Wolf in a windswept field. Another cloud drifts across the moon as the lights go out. Waiting resumes.

There is a click, tentative. Another, hesitant. A third, then a rising clatter of percussive sound. Sparks flash between the ancient fingers. Seventy two pairs of wrinkled hands, seventy two pairs of quartz pebbles from the seashore rise and fall. A rhythm builds, accelerates, breaks apart, a new one forms. Light follows shadow as clouds obscure and reveal the waning moon. The clack of rock striking rock goes on, and on, relentless as the waves striking the beach. Patterns of light and sound are mesmerising, primal. The old folk are absorbed in their pointless occupation, striking sparks from stones. Minutes pass, become an hour.

A shock when the noise suddenly ceases. Carefully, reverently, the performers place their white stones on the dark soil in front of them, rise and file silently away. The caller resumes - “One, two, three, four, one, two, three, four”; a better cadence this time. As the column vanishes into the darkness you are left with the moonlight and the ocean.

A passing speedboat shatters the mood.

It's winter again, and that means Dark MoFo, Hobart's feast of noise and light, of music, film, theatre, art exhibitions and amazing food. The performance on Bruny Island was Empty Ocean, Mike Parr's latest creation. I was one of the seventy two participants.

At MONA a new exhibition opened on Saturday – The Museum of Everything. It is a maze of gallery spaces chock full of sculpture and painting created by so-called “outsider” artists, by artists who are intent on expressing their opinions and emotions regardless of prevailing movements and fashions in contemporary art. Here are no self-conscious intellectuals rebelling against their art-school training; these artists are totally serious and sincere. For many of them theories of art, traditional art making materials and techniques, and often the entire “art world”, are simply irrelevant. Some don't even think of themselves as artists; they just make stuff. Like the best punk rock, it's often raw and confronting. Some pieces are incredibly beautiful; some so bad they're brilliant. All are fascinating, challenging and thought-provoking. 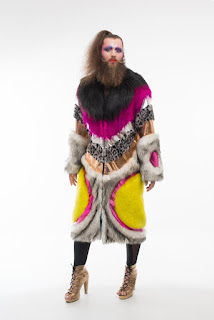 The entertainment at the opening must have followed this do-it-yourself aesthetic for I was invited to perform as part of Gunshy Polyphony, a group of seven singers.

I am the old lady in the front pew who sings all the hymns very loudly, out of tune and probably in the wrong key, but today the emphasis was on dissonance. I can do that. We improvised vocal polyphonies while strolling around showing off the most fabulous luxury fake-fur coats from Melbourne designer Kathryn Jamieson.

Her Gunshy label is attracting attention world wide and fans include Wutang Clan and Conchita Wurst. This collection certainly attracted attention on the MONA tennis court. Not me in the photo, I hasten to add – but I was lucky enough to wear this coat.

You can see the rest of the collection here  http://www.gunshy.com.au/category/pimp-it-bitch-collection-aw16-high-end-range

These two experiences could not have been more different. Those of you who are actors or performance artists no doubt take all this in your stride, but I am a visual artist. I spend my time locked away alone in the studio, only occasionally emerging to show myself at an exhibition of my paintings.

Performing in public is a new and exciting experience, not least the “dressing up” part. Kathryn's coats lift the spirits; they are so frivolous and extravagant they just made me happy. In one of her coats I could do anything – even sing! Getting into costume in the hall on Bruny Island had the opposite effect. I suddenly felt uncomfortably diminished, institutionalised; nobody is a hero in striped flannelette pyjamas.

Several of the performers were fellow members of the Hobart Walking Club. We are used to seeing each other with backpacks and stout boots, covered in mud and leeches, scrambling over rocks and logs half way up a mountain. Now we looked like a lot of non-descript geriatrics and I kept thinking of Art Spiegelman's famous graphic novel Maus. In fact, Mike Parr made a point of reminding us we were all born around the end of the Second World War, and referred to Nazi death marches. However, he also talked about positive things, like the significance of the number seventy two - it's Mike's age – and being a child playing games with his brother, striking sparks from pieces of flint. And he exhorted us to go out there proudly. We did. And it felt great.
Posted by Elizabeth Barsham at 1:39 AM No comments:

The Falls in Winter

Winter in Tasmania is THE BEST time to go walking; the days are short, but the sun shines and the sky is blue. There is a crispness in the air that makes you want to get out and stretch your legs.

Today's stroll from Bennetts Road to Kermandie Falls along the old Hartz Track certainly stretched everything.

Here is the walk description from the Hobart Walking Club circular:
This is the middle section of the historic Kermandie Track which goes from Geeveston to Hartz Peak. Damaged forestry roads have been a problem so our approach to this middle section ending at Kermandie Falls will be from Bennetts Road going downhill to the falls. When we are feeling weary, we will return uphill to the cars. The track goes through magnificent forest with mosses, fungi and even lyrebirds. The final kilometre of the track has a number of fallen trees to negotiate but the forests and the falls make it all worthwhile.

Every word of it is true, right down to the lyrebirds - not only spotted crossing the road as we drove into the forest, but keeping us entertained with a rich variety of melodious calls. 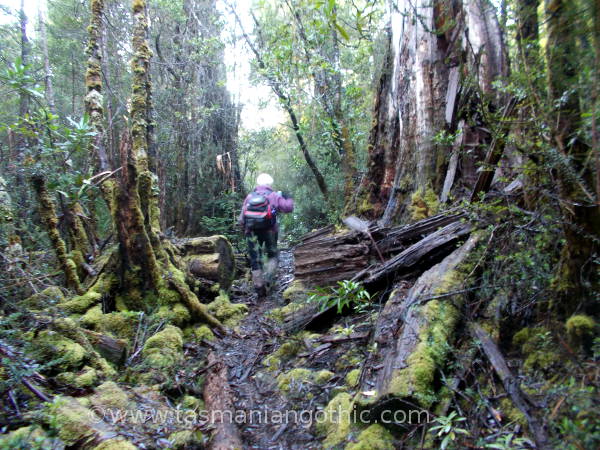 Many of the logs we encountered had been cut nicely - but many more had not. For some reason every photograph I took of people climbing over logs had a bad case of camera wobble, so you'll just have to believe me when I tell you much of the walk consisted of crawling under or scrambling over fallen logs of varying degrees of slipperiness and complexity. 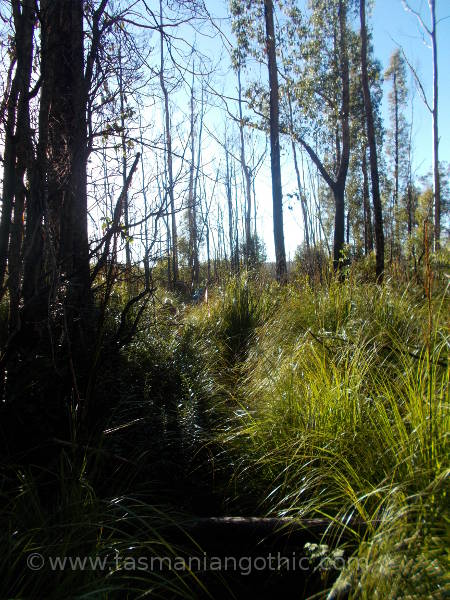 A stretch of cutting grass and mud 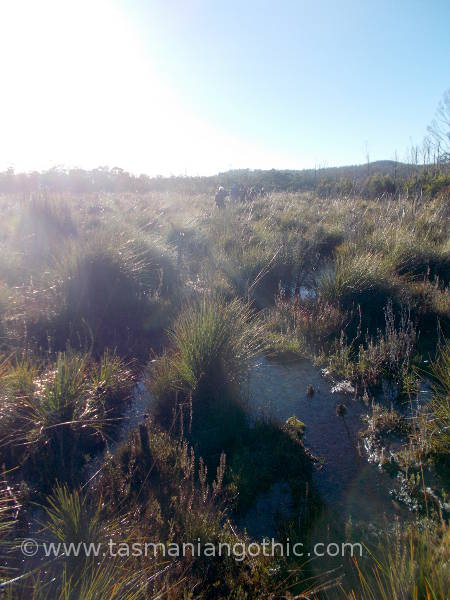 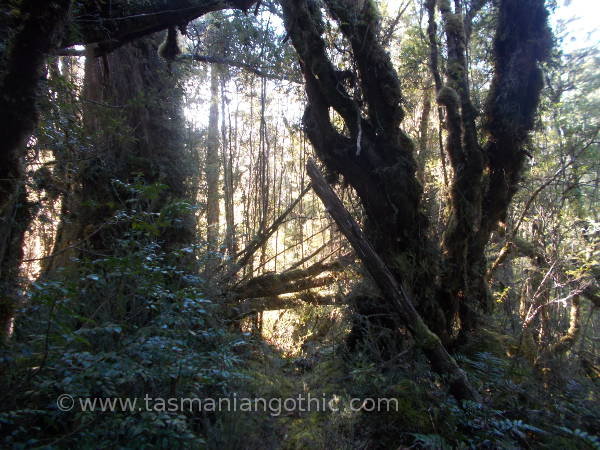 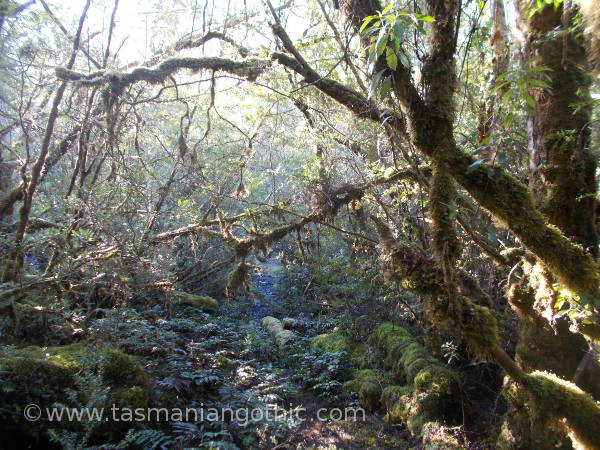 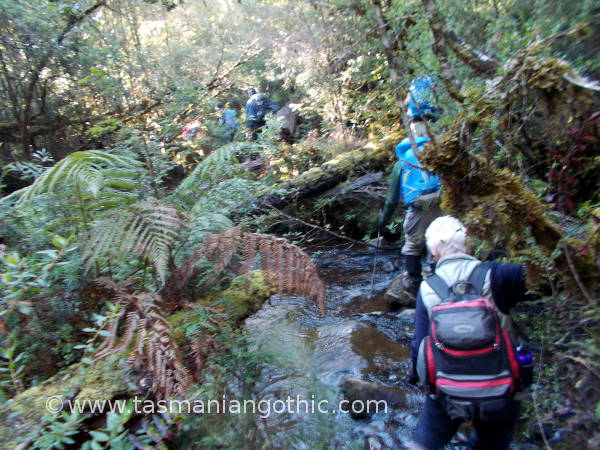 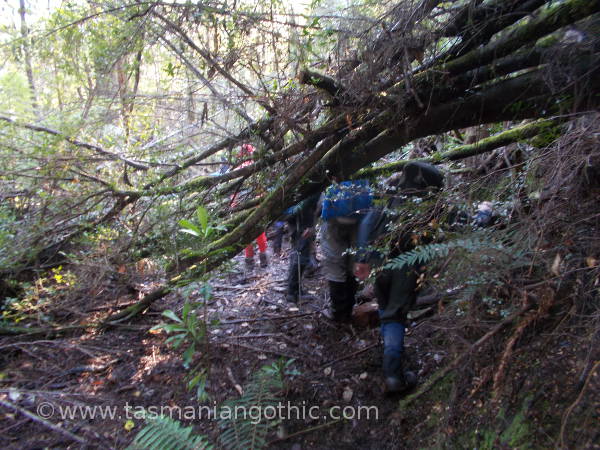 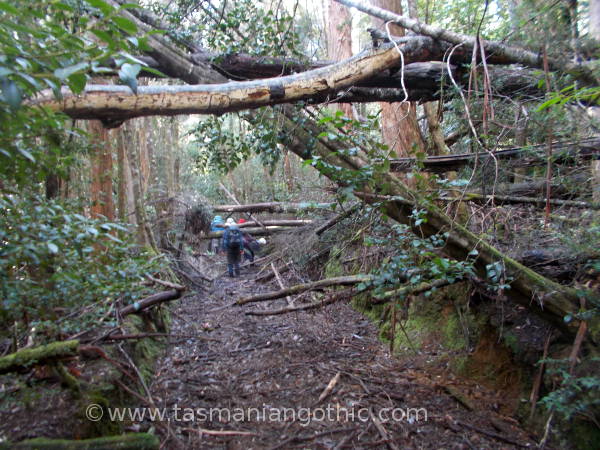 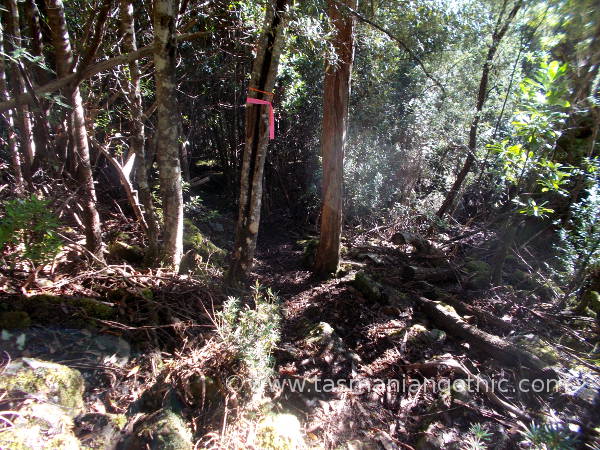 Leaving the main track, we plunge off down a steep slope to the falls. Lots of tree roots to slip on, plenty of things to scramble over, under and through.


Towards the bottom an even steeper, slippery track along the side of a deep, dark gully brings us to our destination.

Terrifying to imagine the force that swept these logs into the valley.


Having lunched, we retraced our steps. Up the hills, over and under the logs, across the creeks, through the mud . . .


It was a welcome sight - our cars waiting for us at the end of the track. And the afternoon sun showed traces of snow still lingering on Hartz Peak.

What a wonderful winter walk. Now for a long, hot bath with lots of scented bubbly stuff and a good book.
Posted by Elizabeth Barsham at 1:02 AM No comments: