Bluff River Gorge is one of Tasmania's best-kept secrets - unless you're a bushwalker. I've walked in there several times, but today was the first time I remembered to take a camera. These are the results.

It's a bit of a hike to the top of the gorge, a steep path down towards the Bluff River, then a nerve-wracking traverse along the gorge. And it's worth every minute, alternating between awesome and aaaagh, depending on whether you look up at the incredible sandstone formations or down at the sheer drop to the Bluff River, far below. 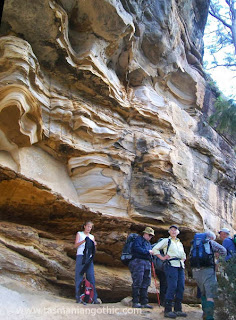 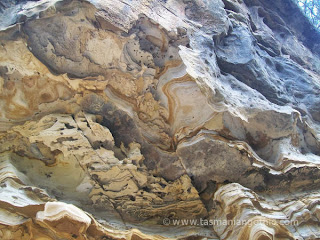 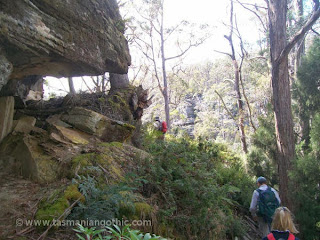 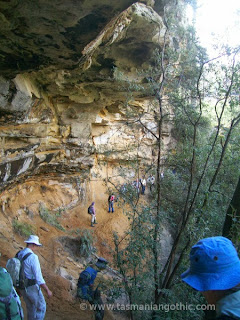 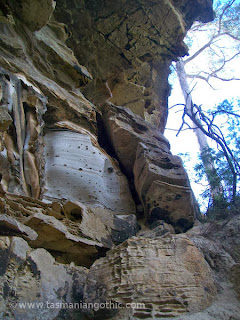 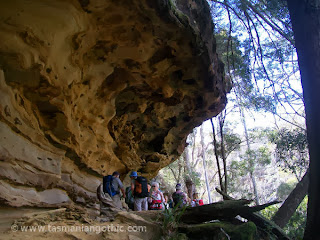 I would have taken more photographs, but in most of the really spectacular places I was too busy hanging on like grim death to pull out my camera. It is not a particularly difficult walk, but there are plenty of places where the path is the width of your boot, loose sand or slippery moss, and there's not much between the walker and the water far below. 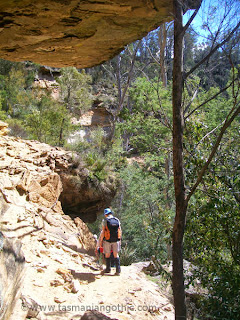 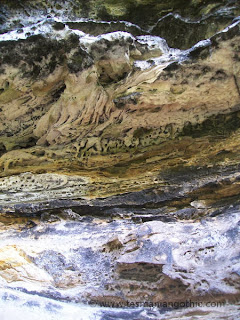 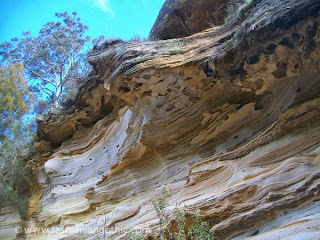 The day was fine until lunchtime when we were hit by a violent squall that sent everyone scrambling into their foul weather gear. As soon as we set out again the sun reappeared so we stopped to take our jackets off again. Tasmania has such humorous weather.

We scrambled over and under fallen trees down to the river, hoping to walk back along the other side of the gorge. "Why are we going this way, if it's further than the direct route back to the cars?" a Prospective Member asked. Because we're a walking club - it's what we do . . .

The river is not very wide, but it was flowing very fast and the stepping stones were submerged boot-top deep. There was some discussion about whether we should cross, but the day was finally won by those who were not in the mood for wet feet, and apprehensive about the second crossing we would have to make further downstream. We turned back. 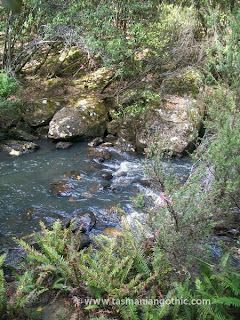 Now things got a bit confusing. Some people who were well ahead missed the turnoff up the hill. There was a good deal of coo-eeing echoing up and down the gorge, with half the walkers waiting at Octopus Head, where we'd stopped for lunch earlier, and the rest climbing the next spur and following a fire trail back in the right general direction.

It didn't take long to make contact and establish where they were and we assured the Prospective Members that losing half the group was not a usual occurrence. They didn't look too worried. 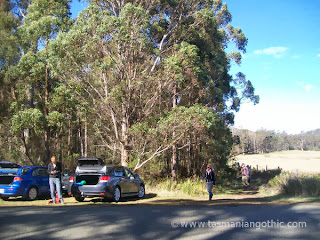 We returned to the cars tired but happy and the day ended with the usual picnic. Thank you to the walk leader!
Posted by Elizabeth Barsham at 11:10 PM